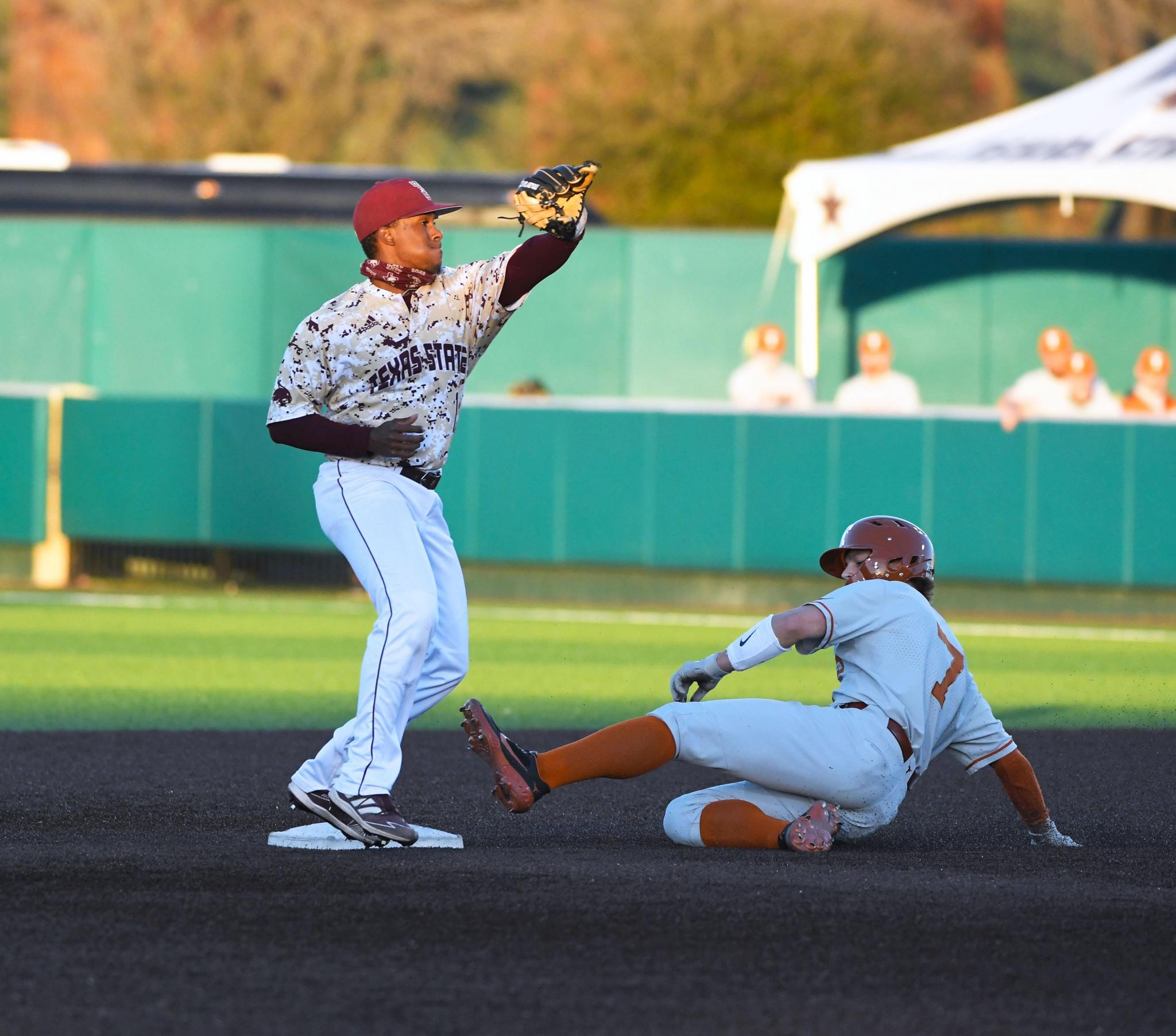 The numbers don’t lie for Texas State. When the Bobcats pitch and play defense at a high level, they win, according to head coach Steven Trout. When they don’t do that, they don’t play very well.

The team saw examples of both sides this week as it earned a comeback win over New Mexico State on Tuesday, 8-6, but fell to No. 19 Texas on Wednesday, 10-3, inside Bobcat Ballpark.

Texas State showed it could handle adversity against the Aggies. NMSU sophomore Brandon Dieter aired out a grand slam to left field in the first inning, but the hosts chipped away at the lead to get back into the game.

The Bobcats loaded the bases and sophomore right fielder Peyton Lewis doubled down the right field line to send two runners home. Senior catcher Bryce Bonner grounded out in the next at-bat, bringing another runner across.

Senior Jaxon Williams tied the game up by grounding out with the bases loaded in the fifth inning. The Aggies (1-3) scored a pair of runs in the top of the sixth, but Texas State matched them in the next frame with a two-RBI single from junior third baseman Justin Thompson. The Bobcats added another two runs in the bottom of the seventh with RBI singles from junior first baseman Wesley Faison and Bonner to claim the 8-6 win.

“You know, it was four but it was early. It was the first inning, so we had a lot of ballgame left to go,” Bonner said. “And it was important, especially as our record shows, we've been kind of going through a rough spot. So it was just a big thing of just being positive and just playing baseball, really, and just not getting too down ourselves.”

But the hosts weren’t able to complete a comeback when it went up against the Longhorns the next day. Texas redshirt freshman shortstop Trey Faltine blasted a two-run homer down the left field line and the visitors added another run later in the top of the second to get the orange and white on the board.

The maroon and gold answered immediately, as Faison scored on a ground out from junior right fielder Isaiah Ortega-Jones in the bottom of the inning. Faison then drew a walk with the bases loaded in the third for a free run, cutting the deficit to 3-2. But Texas State couldn’t take advantage of the bases-loaded situation as senior catcher Tucker Redden grounded out in the next at-bat to end the frame.

Neither team scored through the next three innings until the Longhorns (5-4) pulled away with five runs in the top of the seventh. The Bobcats got one back with an RBI triple from Thompson but Texas added two insurance runs in the eight to end the game at 10-3.

“We talk about it after the fact, but we try to buy into the process of throwing strikes and throwing quality pitches and having positive at-bats and things like that,” Trout said. “But right now, it's just not going good.

“And the frustrating thing about it is we've got a lot of veteran guys that have had a lot of success in their career, so it is uncharacteristic of what we've done the last couple years. And so, I've got all faith the world that they're going to come back for it, but we've got to change now.”

The team has dealt with multiple injuries throughout the season so far. Junior outfielder John Wuthrich and shortstop Dalton Shuffield, who had the team’s third- and fourth-best batting average in 2020, respectively, have both been out of the lineup the past seven games. Junior centerfielder Ben McClain, who Trout said led the team in hitting during fall scrimmages, just returned to the lineup Tuesday after missing the previous six games.

But Texas State is down across the board in almost every statistic. As a team, the Bobcats are swinging for a .231 average, pitching for a 5.52 ERA and have committed 16 errors — two more than they committed last season despite playing in four fewer games this year.

The schedule doesn’t get easier for the maroon and gold, either. They’ll head to Minute Maid Park in Houston this weekend for the 21st Annual Shriners Hospitals for Children College Classic, facing No. 9 Texas Tech (5-3) on Friday, No. 8 TCU (6-2) on Saturday and Rice (3-4) on Sunday, all three games beginning at 7 p.m.

Trout said he hoped to get the team prepared after practicing at Minute Maid Park on Thursday.

“It's not ‘Let's go in there and see how far we can hit it just because we're in a big-league ballpark.’ It's work for an hour,” Trout said. “And so, we gotta get used to the facility, obviously we haven't played on grass and dirt a whole lot … But we gotta find ways to get better. And for us, every time we play catch, every time we throw a baseball or catch a baseball, it's really, really important right now.”