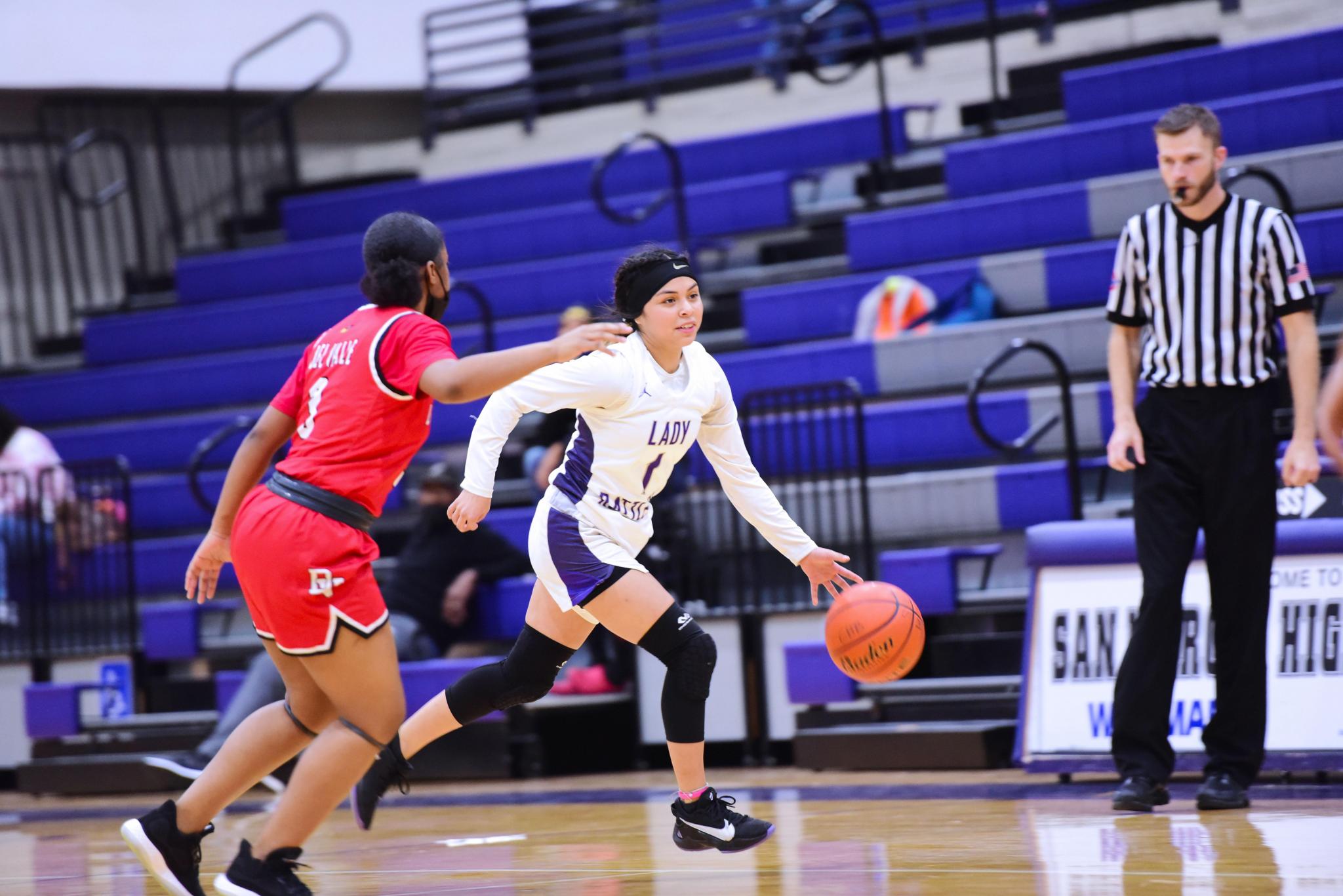 Tobias shows off improvements in dominant win over Del Valle

Ezra Tobias is navigating her role with ease for San Marcos.

Before the season, the Lady Rattlers lost sophomore guard Bailey Guzman to season-ending ACL and MCL injuries.  Almost a month ago, the Lady Rattlers were without head coach Jermaine Ervin for two games. Earlier this week, they were told they would be without starting senior guard Vivian Hernandez, who already missed time with a concussion this season, and junior forward Reagan Harris.

The loss of Guzman, Hernandez and Harris has given freshman guard Ezra Tobias the chance to play significant minutes in the Lady Rattlers’ rotation and she’s taken advantage of it. Her play especially shined in San Marcos’ 68-20 win over Del Valle inside the Snake Pit Friday night when Tobias scored a career-high 16 points in the 48-point win — 14 of which came in the first half alone. Ervin praised his freshman’s role on the team and how important she is when she’s on the floor.

“When I can play (Ezra) with (senior guard) Angelina (Sotelo), I can get Angelina off the ball and she can focus on scoring,” Ervin explained. “When Ezra’s in foul trouble or she's not playing as much, Angelina has to be on the ball longer, which slows us down offensively at times. She's not a freshman anymore. She's got to be a sophomore at this point. She's playing too many games to give her that freshman title, but her progression is important.”

Tobias wasted no time getting on the scoreboard, scoring six of San Marcos’ first 10 points before Del Valle (3-11, 0-4 District 26-6A) used its first timeout of the quarter. Following Tobias’ lead, the purple and white went on a 24-0 run and didn’t relinquish a point until a three by the visitors fell from the top of the key with 55 seconds left in the first quarter.

Scoring right behind the freshman was the savvy senior, Angelina Sotelo. What was interesting about the two taking turns scoring the ball is that Tobias picks up on her veteran guard’s play and implements it into her game as it goes on.

Tobias and Sotelo were responsible for 23 of the team's 40 first half points as San Marcos led 40-10 after the first half. Many of the freshman’s buckets came by simply stealing the ball near the rim and laying it up easily.

“Defensively, I'm always there to help and my quickness obviously helps me,” Tobias said. “Something that has developed very fast was my IQ. The game had to change a lot because obviously, I'm little. There's older, taller, stronger girls out there so I just keep my eyes open.”

With Tobias leading the way and San Marcos well ahead of its opponent, Ervin decided to play with five underclassmen as the lineup consisted of Tobias, junior forwards Saylor Upshaw, A’miya Moore and Marli Myers and junior guard Felicity Calderon.

“We have to do it, especially the games that we can do it,” Ervin said. “They need to gather more and more confidence that they've already gathered from these seniors. But now they need to go see it.

“That's what it's going to look like, plus some of our younger girls next season. So they need to be able to say, ‘Hey, we're leaders now.’ As we change up our leadership model, let's get the seniors out of here and let's let them do what they have to do to get us where we need to be. But we're ready to step into that mode without it being a shock for them next.”

The confidence the younger players gained throughout the season maintained a calm lead as they closed the game by outscoring Del Valle 28-10 in the second half, resulting in the 68-20 win.

San Marcos (17-7, 3-2) gets time to recuperate and hopefully galvanize the rest of its healthy troops to finish off a three-game homestand against Austin Bowie (8-11, 2-2) on Tuesday at 7 p.m. Upshaw made it clear that no matter what the team goes up against, as long as they remain together, they can overcome any challenge.