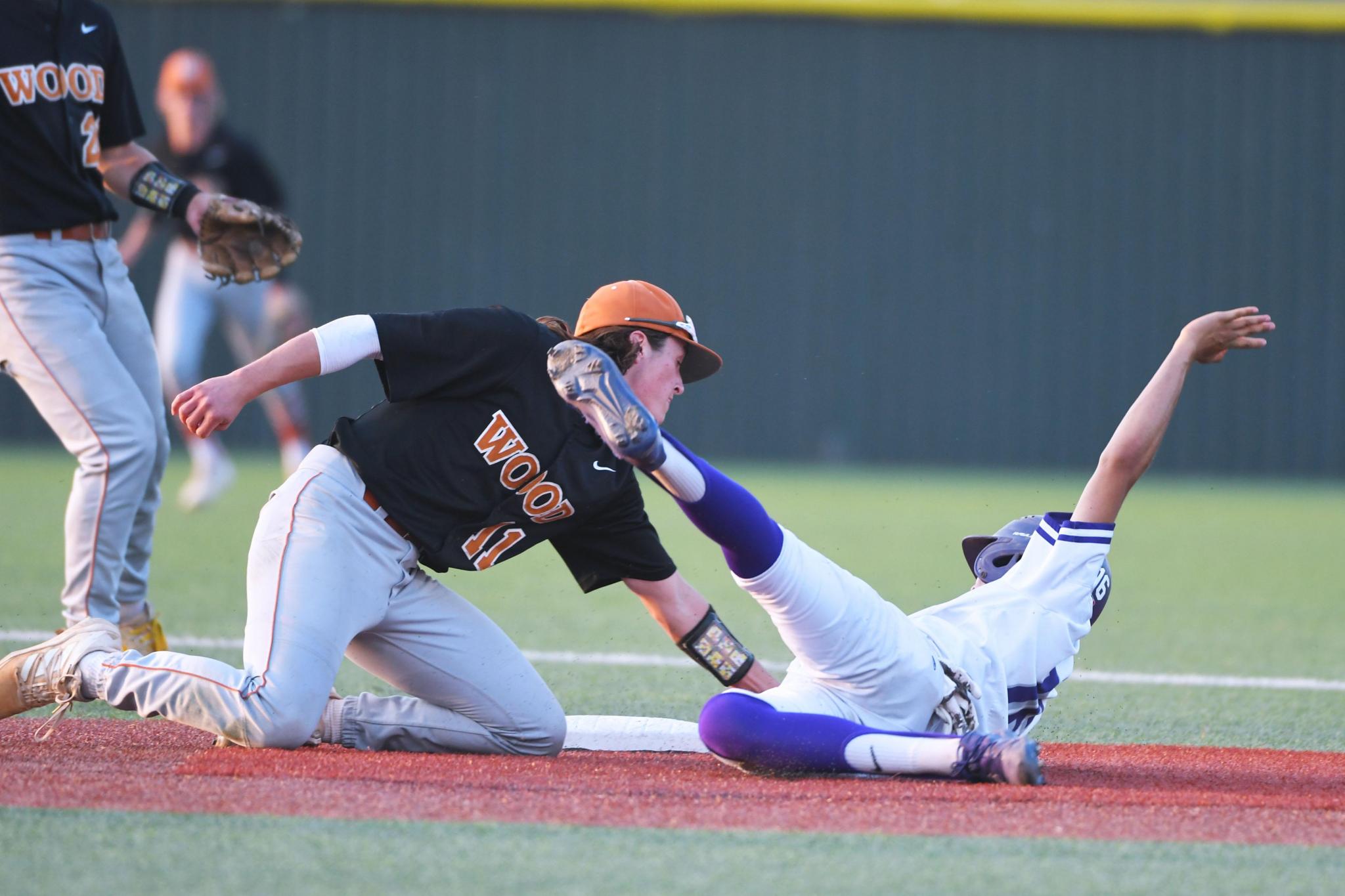 San Marcos and Round Rock Westwood are locked into a first-round, three-game series which was chosen by Westwood, the District 25-6A champion. Winning the district allowed the Warriors to pick a one- or three-game series and the champs chose the latter, allowing the purple and white to host the first game. Game one didn’t fail to excite but no one would have known the results of the game or even been able to predict the trends.

Round Rock was able to halt a 4-0 run by the Rattlers late in the game, and a checked swing called for a strikeout awarded the visiting No. 1 seed a 5-4 win over the hosts in eight innings on Friday.

It was the result of inexperience and uncharacteristic mistakes by the Rattlers that allowed Westwood to secure the victory. Webb loved his team’s heart and willingness to compete but said they’ve struggled closing out games against the best teams when it’s close.

“They’re tough mentally, they want to win, they want to compete, they just can’t finish it right now,” Webb said. “That’s where the problem is right now. We had a chance to finish that ballgame. I thought we truly outplayed them most of the night and what they did is they made the routine plays and we kicked it around a little bit. Every time we kicked it around, the good teams are gonna exploit it and they did.”

Westwood’s experience displayed itself early as the team opened the game with consecutive singles. Another base hit ignited the scoring for the visitors in the first inning. Another RBI in the next inning established a 2-0 lead as San Marcos (16-15-1, 8-6 District 26-6A) was held scoreless in its first plate appearances.

Webb couldn’t pinpoint the exact cause of his team’s slow start.

Though the game wasn’t over, the plays were a reason San Marcos fell short. A hit to right field dropped out of the outfielder’s glove, which turned an out into a double. Another error by the defense allowed Westwood (21-6, 11-3 District 25-6A) to take a 4-0 lead heading into the bottom of the fourth.

Junior outfielder Major Pellien played a major — no pun intended — role in the Rattlers’ offensive success on Friday night. Pellien added a second hit to his stat line as the leadoff man in the fourth. That jolted the offense as San Marcos loaded the bases and got a runner in scoring position for just the second time in the game. Sophomore outfielder Marco Duenez hit an RBI single to get the Rattlers on the board.

Two innings later Pellien, sent the hardest hit of the night to left field, resulting in a ground rule double and two runs scoring, cutting the deficit to 4-3. Webb had high praise for his junior outfielder after the game.

“He’s a threat at the plate,” Webb said. “He takes good swings, He takes good hacks. He’s learned his approaches. He’s adjusted his swing a little bit and he’s done a really good job for us. He’s been consistent all year. I mean, Major is Major. I just let him get in there and tell him to take his hacks. That’s what he does. So he’s got his own type of swing and he’s got his own mentality.”

Next up, junior first baseman Stephen Wilder sent a shot in between three defenders, scoring the tying run. San Marcos definitely couldn’t have predicted this.

The scoring fell silent for both sides as sophomore and junior pitchers Reagan Chomel and Tito Santos, respectively, worked together to keep the game in check. Westwood had runners in scoring position but Chomel left runners stranded on second and third with the score tied at 4-4 headed into the bottom of the seventh.

Pellien once again found success at the plate, followed by junior outfielder Ryan Hix. The Rattler offense loaded the bases with one out and a chance to win. Again, Webb’s sentiments of “you never know” played in favor of his opponent as one run by the Rattlers would secure a win.

Westwood caught a break when San Marcos grounded into a double play, which took the teams to extra innings. The visitors’ momentum carried into the top of the eighth as they mimicked San Marcos’ previous inning by loading the bases. Gael Garcia brought in the game-winning run on a hit, which forced the hosts to go for the out and surrender a 5-4 loss for the purple and white.

San Marcos and Westwood take the field in Round Rock for games two and three (if needed) Saturday at 1 p.m.