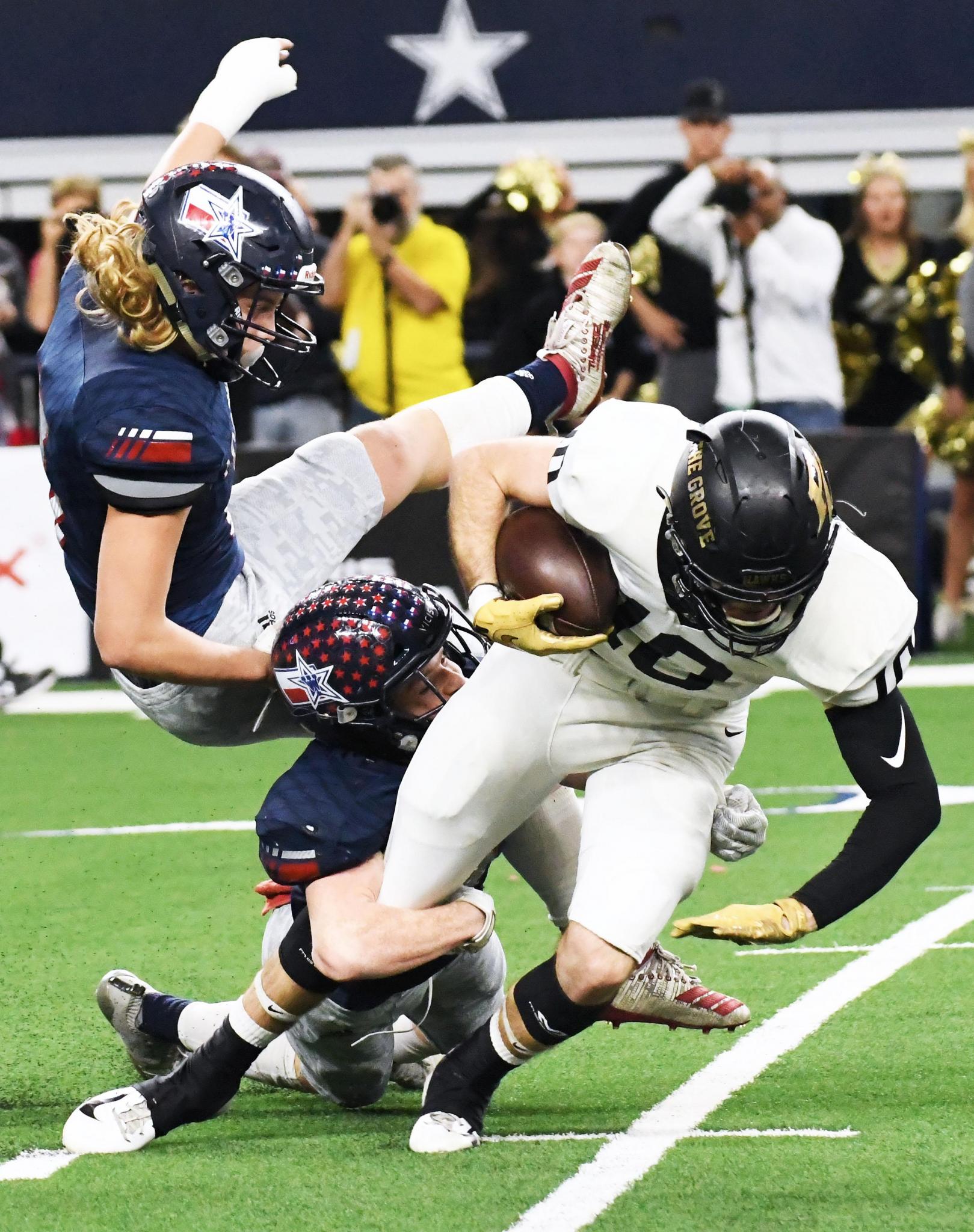 The Pleasant Grove Hawks stifled the Texans offense by holding them to just 21 points and 252 yards of offense on route to a 35-21 victory.

The Hawks win their second state championship in three years while the Texans finish the season at 12-4.

“I thought defense was lights out,” Head Football Coach Doug Warren said. “They gave us an opportunity to win a state championship, and on offense we were just a little out of sink and you have to give it to those guys. We knew that their defensive line upfront was going to be a tough load to handle. We thought that would be a big key if we could handle those guys a bit and get the run game going that we might have some opportunities. But they stuffed our run game and we became one dimensional and then it was tough the move the ball. You have to take your hats off to those guys.”

It was a bittersweet end for Wimberley as the Texans made it to the State Championship for the first time since 2011.

“Unbelievable group of young men to be around,” Warren said after the game. “As we got to the end of the regular season, not many people gave us an opportunity to be in this run, these young men answered the call.”

The Hawks struck the blow of the game as KJ Hicks returned the kickoff 88 yards for the touchdown to put the first points on game at 7-0.  It was the Texans that struck first with the offense as Cooper McCollum found Colby Boyle for an acrobatic dive into the end zone for the 14-yard touchdown. The game was tied up at 7-7.

But the tie didn’t as long as Pleasant Grove answered by a Bruce Garrett, who is committed to play college ball at Brigham Young University, 54-yard touchdown run to tie the game up at 14-7.

The Texans didn’t back down from the top ranked Hawks. The Texans scored again as Moses Wray scored from 24 yards out to tie at 14-14.

After the scoring fest to start the first quarter, it was both defenses that took over.

Following a Texan touchdown, the Pleasant Grove offense threaten to score again at midfield but Wimberley’s Colby Wiegman intercepted the pass to give the ball the back to the offense.

Both defenses held the explosive offenses in check as the teams traded possessions allowing less than 30 yards per possession.

Pleasant Grove finally broke late in the second quarter with a 77-yard drive before Garrett scored his second touchdown of the game with a 11-yard run to retake the lead before the half at 21-14.

The third quarter was another defensive struggle as both offenses failed to score. After the Texan defense stopped the Hawks on fourth down, the Wimberley offense tried to break through the Hawks defense but to no avail.

Pleasant Grove finally found the chink in the Texan defense armor and put together a 52-yard drive. Facing fourth down, the Hawks scored as Ben Harmon found Antonio Watkins on the 29-yard touchdown pass to extend the lead at 28-14.

The Texan Offense struggled against the Pleasant Grove defense and was unable to answer the Hawks score.

“They just executed,” Texan Quarterback Cooper McCollum said of the Pleasant Grove defense. “They didn’t give you any free plays. There were no wide-open plays. They didn’t misfire on any parts of their defense. Their defensive line is some of the best guys that I have ever played against in my four years. They are big and physical and awesome guys. Their corners and safeties are quick and we just weren’t able to exploit and fire on all cylinders. We weren’t the biggest playmakers out there with the defense giving us the opportunities they did.”

Pleasant Grove then put the dagger in the heart into the Texan comeback as Garrett scored his third touchdown of the game to extend the Hawk lead at 35-14.

Though the Texans didn’t give up and scored again as McCollum found Kolby Goforth for the 25-yard touchdown pass to cut the lead at 35-21,

“That last touchdown, I hope it helps people reflect and put a smile on peoples faces,” McCollumn said. “It is terrible to walk out of here without the goal you wanted to reach, but I don’t want people to look back on this season and see the same thing they see here tonight. We had a hell of a season, and it was awesome. I wouldn’t trade it for anything in the world. I am grateful for the opportunity. It is something I won’t forget. I think that last touchdown summed it up, (and it was caught by) one of my best friends Kolby Goforth. It showed us what the line can do too. Those guys, Heath, Cameron, Ryan Rubio, Zach Starr, Carson Minnix and Collin Kincaid, they always have my back. I love them more than anything.”

The touchdown wasn’t enough as Pleasant Grove kneeled out the clock and the State Championship.

It wasn’t the game everyone hoped for but the Wimberley Texans played well against the team whose lone loss on the season was to the 4A Division I State Champion in Carthage.

The Texan defense held the powerful Hawks offense to just 35 points, the third lowest point total for Pleasant Grove, and kept the team in the game turnovers and fourth down stops.