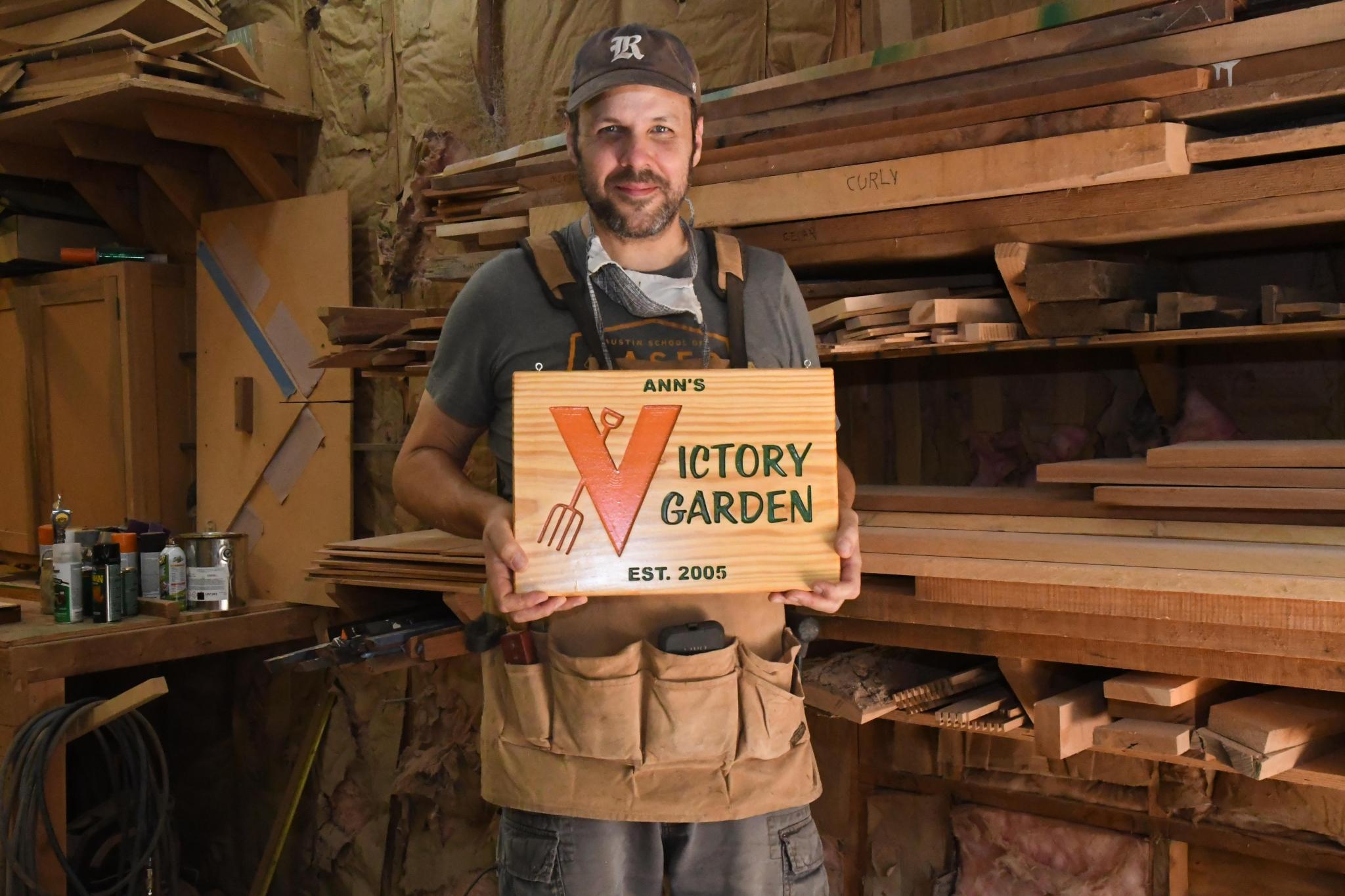 Measure twice, cut once — that’s a saying amongst woodworkers.

Mark Love is one of those people used to working with close tolerances. Love, who is a high-end furniture designer/creator, has been making wood furniture professionally for more than a quarter-century.

He was working at his shop, located in Wimberley, when the COVID-19 pandemic made its way into Hays County. Not unlike most businesses Love took a hit, financially.

“Obviously, the pandemic affected everyone in business,” Love said. “I had about six jobs lined up and four went away. I totally get it. It’s a lot of money and people are unsure about the future. The last thing you’re going to do is spend $6,000 on a table.”

Love said as the pandemic unfolded his wife, a home health care worker, quit her job out of fear for her health, and the health of others.

“So, we had a moment of panic,” Love said. “Afterwards, we began thinking about what we can do to keep making a living, but also what could we do to help during the worst crisis of our lifetime?”

It wasn’t long after, Love saw a post on social media dealing with Victory gardens grown in America during World War I and II.

“I started reading about them and realized, as a woodworker, I could make a vintage looking sign for people’s garden,” Love said. “I even took the ‘V’ from a 1940’s poster and the font to create the sign, making it look more authentic.”

No sooner than he did, Love posted his creation on Facebook, and the orders started coming in.

“The only change I made came when people wanted it personalized by having their name and year added to it,” he said.

He’s sold more than 50 and with every purchase he donates 25% of the profits to the Central Texas Food Bank. So far that’s right at $600.

“It’s created a neat community of people buying these signs, hanging them in their gardens, and posting pictures of themselves with them,” Love said. “But what I love most is this sense that while many of us are home alone — we’re all doing something, together. It’s a sense of purpose; we’re fighting a war.”

Love said through his research he discovered that 1/3 of the nation’s vegetable crop came from Victory gardens during the height of the World Wars.

Obviously, Love said this fact played well with the scarcity of many items at stores during early March.

“I think we all were wondering what if society collapses here — and no food,” Love said.

“Gardening also gives you something you can do with your kids and family. I’ve sold these signs all over the country and gotten pictures back from Maine to California. It’s been fun to see people’s interpretation of gardening, from a balcony in Brooklyn, to much larger spaces.”

NOT HIS FIRST TIME

Love considers himself an “artsy/crafty” type and the Victory garden signs aren’t his first experience dealing with something he considered, “societal.”

“About eight years ago I realized these things were killing us,” Love said — holding his cell phone. “I’m always looking for meaningful things to do when something affects our society. The first thing I ask … is there anything a woodworker could do?”

So, the entrepreneur set out to begin a campaign to help curb young people’s addiction to smartphones. He created the, “Be Present Box.”

The design was simple and elegant. The idea was to restrict telecommunications during a certain period.

“Kids and adults alike are glued to their smartphones,” Love added. “So, if everyone will place their devices in the Be Present Box for 20 minutes to an hour…or whatever, families can visit and talk about what’s going on in their lives.”

“The boxes were even featured on CNN,” he said. “Oprah bought one; Troy Aikman bought several. It was a fun thing. It was my way of saying so this is what a woodworker can do.”

For six-years, before opening his own shop, Love honed his craft serving as an apprentice of Michael Colca, famous for creating fine works in wood at his shop in Austin. Colca’s works are known for its exquisite craftsmanship and sensitive use of material. He’s been featured in Architectural Digest, Texas Monthly, Arts and Crafts Homes, and Cottages and Bungalows.

Love shares that same passion for craftsmanship, but it is the defined, precise parameters he likes most about working with wood.

“I wanted to do something with my life that locked me into the truth,” Love said. “If I cut a board and it’s too short, I can’t talk my way out of it. I like that — I needed that.”

It carries over into his work as well.

“Wherever possible, and appropriate, I use centuries-old wood joinery techniques,” Love said. “Not because they are romantic, but because they are almost always the strongest and longest-lasting option for joining two pieces of wood. This is why they are centuries old.”

He said the best joints don't rely on metal fasteners, or even glue. The best joints — the ones that will still be holding together centuries from now — are simply made of wood that's been shaped to fit tightly into other wood.

“They are the joints that understand the demands of function and atmosphere over vast amounts of time,” he said. “They are joints that assure us who use them that we will never need to return to a piece to repair it.”

Today Love has more than 50 original pieces which live in over 30 homes and offices, in 16 states across the country.

“I've only ever had one piece of furniture come back to me with an issue, which was easily solved,” Love said. “This track record helps me sleep easily at night, knowing that the things I've put out there will last. And sleeping well is a perk that's worth every bit of extra effort it takes to get it right.”

Visit www.lovewoodartist.etsy.com to place an order.