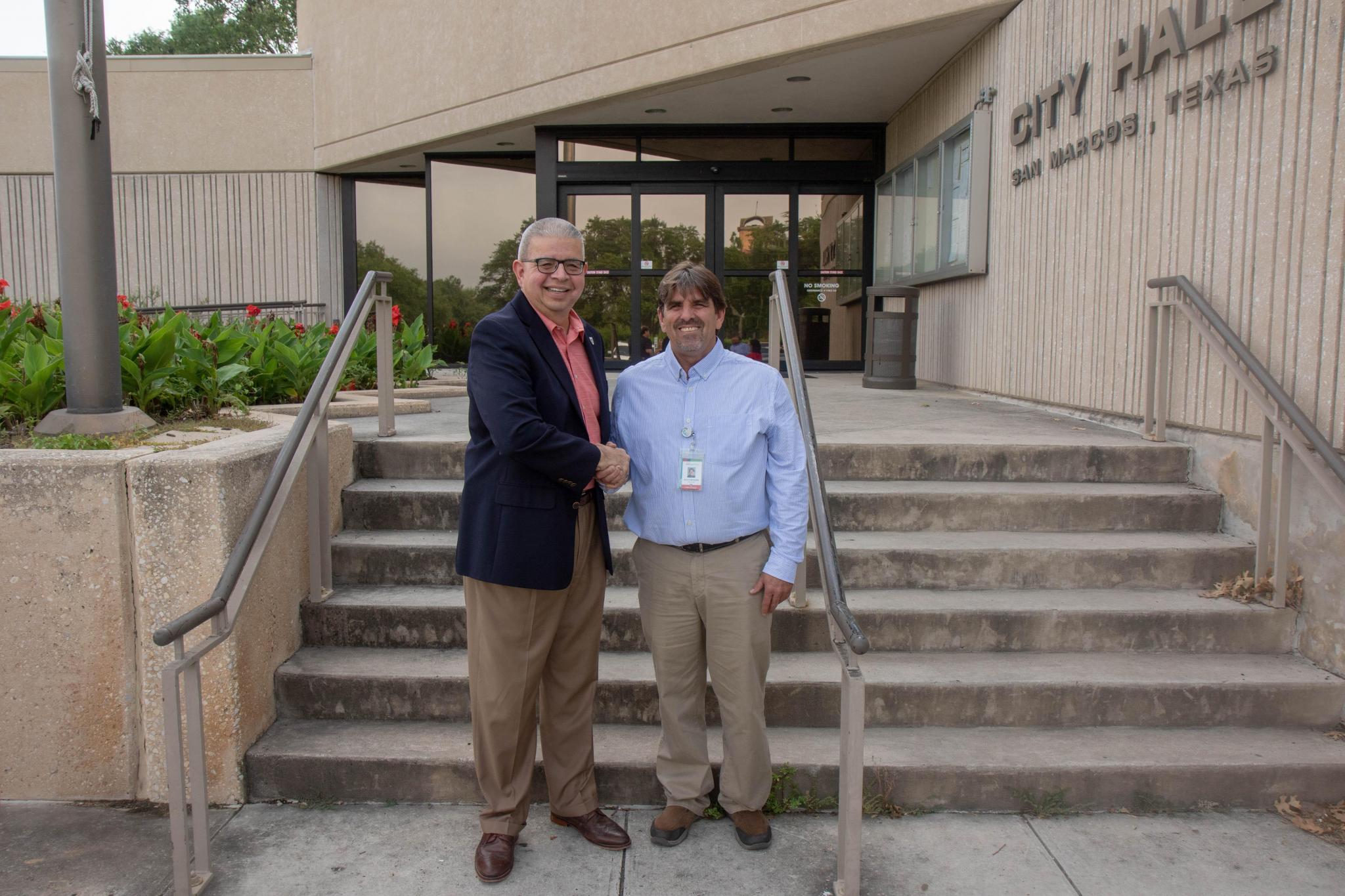 Scott McGuire is a guy's guy. He likes pizza and basketball — enjoying both frequently at New York Pizza Pub in New Braunfels.

The 52-year-old joined the Public Works team at the City of San Marcos three months ago, as a Stormwater Crew Leader. As part of the city's protocol, McGuire took part in CPR and First Aid training just two weeks ago. Little did he know he’d soon be called to put his training into action.

"It was Saturday, late afternoon, around 5:30 p.m. and I was halfway through a pizza, when I heard a woman yell out, ‘someone call 9-1-1,'" McGuire said. "I looked around to see what was going on and an elderly gentleman was sitting straight up, mouth open wide, head tilted back, and appearing non-responsive."

McGuire said he felt like he was in a scene of the movie the Matrix.

"There was chaos all around me and yet things seemed to be moving slowly," McGuire said.

Despite that, he kept his cool recalling his training.

"I remembered what Officer Danny Castillo taught us in CPR training, when someone goes into cardiac arrest," McGuire said. "It appeared to me that’s exactly what had happened."

"I had run to the door waiting for emergency personnel to arrive when I heard a loud crash," he said. "His daughter had been trying to keep him in the chair, but the man had fallen completely over."

McGuire said an employee had rushed over to help clear chairs and tables, making room on the floor for the man to lay.

"It's at this point I give everything to the City for the training they gave me," McGuire said. "I found myself on the floor alongside the man observing him. I was on speaker phone to 9-1-1 and I went through the motions of what I was taught in CPR training. I checked for a pulse and couldn't find one. I did three sets of three chest compressions. Then I tilted his head back, which cleared his airway, and got a half breath into him. Then he took a breath."

McGuire said his color seemed to reappear. By this time another bystander began monitoring his pulse and then paramedics arrived.

"Everything Officer Castillo told me, from someone having a heart attack, the ensuing chaos, to making the area safe for the victim, played out in this instance," McGuire added.

CPR and First Aid training is offered to all city employees.

"As soon as a new employee begins, we provide an opportunity for them to participate,” Conyers said. "This is an example of how beneficial it can be."

"Scott didn't tell anyone what he’d done. When I found out I called him and asked if he had anything exciting happen to him over the weekend," Rossing said. "We're very proud of Scott."

McGuire said had it not been for the training he wouldn't have known what to do.

"I might have been the guy who called 9-1-1, but having the training took me a step further," he said.

"But what really got me out of my seat wasn't just the daughter yelling to call 9-1-1. The man had six of his grandchildren sitting around the table. There was a lot of emotion going on … they thought their grandfather was dead. I didn't want that to be their last memory of him."

City Manager Bert Lumbreras said he was extremely proud of McGuire for stepping up in the time of need.

"What he describes with the grandfather and the kids is pretty much what we are as an organization," Lumbreras said. "We're a family-oriented organization. That's not just lip service. That's what we do, it’s how we conduct ourselves. As far as I'm concerned, he exemplifies who we are, and I am very proud of him."