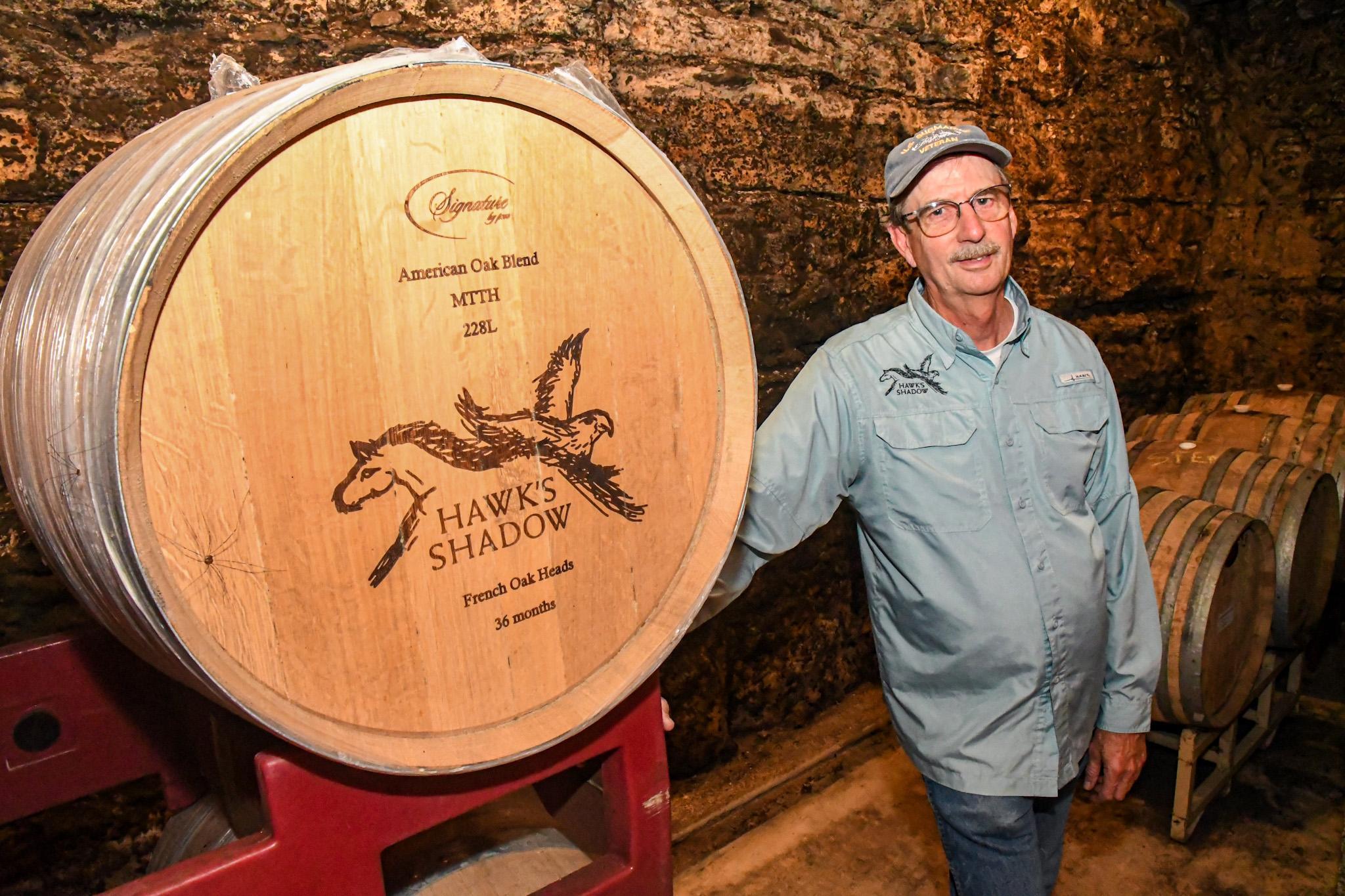 Hawk's Shadow Winery and Vineyard, located in Dripping Springs, produces between 2,500 and 3,000 cases of wine a year. Above, Doug Reed stands next to a barrel of Hawk's Shadow's wine. Daily Record photo by Lance Winter

POETRY IN A BOTTLE: Hawk's Shadow Winery and Vineyard pays homage to the grape

The stars at night may be big and bright in the heart of Texas — but that’s not all.

Ask anyone who’s visited Hawk's Shadow Winery and Vineyard and they’ll tell you deep in the heart of Dripping Springs lies a big wine cellar, full of “poetry in a bottle,” as Robert Louis Stevenson used to say.

A little more than three decades ago Doug Reed and his wife Carol bought a ranch northwest of Dripping Springs. Change was in the air and the duo — each working at Lockheed — decided it was time to set out on a new adventure.

“Carol primarily worked in the computer side of things, data processing and analysis, so more of the business side of computing, where I did more of the engineering. I did a little bit of hardware design and software development for the missiles and space division,” Reed said. “I commuted quite a bit between here and San Jose, every other week for around 13 years ... a lot of miles.”

Doug said he’s always been passionate about wine, and he enjoyed sampling a variety of wines when he found himself on the west coast.

Oddly enough, during that same time, Doug’s brother Tom was working at Silicon Graphics and involved in a couple of start-up companies in California. The two got together frequently.

“So, when we first bought this property, we purchased about 24 vines and planted them in the worst possible place,” Doug said. “It was an old garden site, way too much clay soil and the vines just didn't last. I don't even think they made it a year.”

After that he said they just didn’t give it much attention.

The couple did however move ahead on building their house on the property in 2003. They devoted a substantial portion of the construction to building an underground wine cellar.

“That was my first experience with excavation,” Doug said. “Fast forward a little bit, and in 2004 we started bouncing around another vision.”

Doug said with a grin on his face the idea included his brother Tom and brother-in-law Chip, and generally came in the late evening after drinking a bunch of wine.

The group started with the five acres around Doug's house. After purchasing all the materials for the venture, 12 rows of grapes were planted in 2005 of grafted rootstock from California.

“We were just trying to see what worked,” Doug said. “The following year we planted 30 more rows, completing a full five acres.”

In a few short years, the vineyard was producing choice grapes, they even sold some of their product to a local winery for bottling.

“As it turned out the grapes made really good wine, so we created a winery company,” Doug said.

One thing led to another and in 2009 they began construction of a small building and more excavation, only this time of a barrel cellar that would become the envy of most wineries in the Hill Country. Thus in 2015, complete with an indoor and outdoor tasting room overlooking a picturesque valley.

“We received our winery license in 2010 for Hawk's Shadow, LLC.,” Doug said. “As things go, we produced our first vintage in 2011 and have done an estate vintage every year since. We’ve just released 2017.”

If that seems confusing, it’s because their wines stay in the barrel for at least 20 months for short barrel aging. Long barrel aging could last as long as 70 months.

“This business is all about patience,” Doug said. “Except for the harvest. When harvest comes around everything needs to get done, right then. But once you get through the harvest, it's all about waiting.”

In their massive cellar are hundreds of white oak barrels — its content — becoming perfect as they age. The temperature inside rarely gets above 62 degrees, naturally.

“The high humidity dampness the cellar provides on the outside of the barrel balances the osmotic pressure of what’s inside therefore there’s little evaporation,” Doug added. “We don't have to open the barrels as much, exposing them to oxygen. Because of this balance, we can age our wines significantly longer.”

Their production is between 2,500 and 3,000 cases. A barrel produces roughly 300 bottles meaning they will get around 24 cases out of a barrel. Doug said their barrels come from France, Hungary, and the U.S., all of which have a little different character based on location of the wood.

“In the U.S., we use a couple of different forests to choose from when selecting the barrels we purchase. In France we primarily use barrels that use wood that comes from the Troncais forest, which is tight grain oak. It makes a lot of difference where the wood came from, it really changes the wine.”

French oak barrels are pricier according to Doug. He’s paid upwards of $1,000 to $1,400 more for a French barrel which makes what comes out of it — more expensive. They can use some barrels twice but no more. 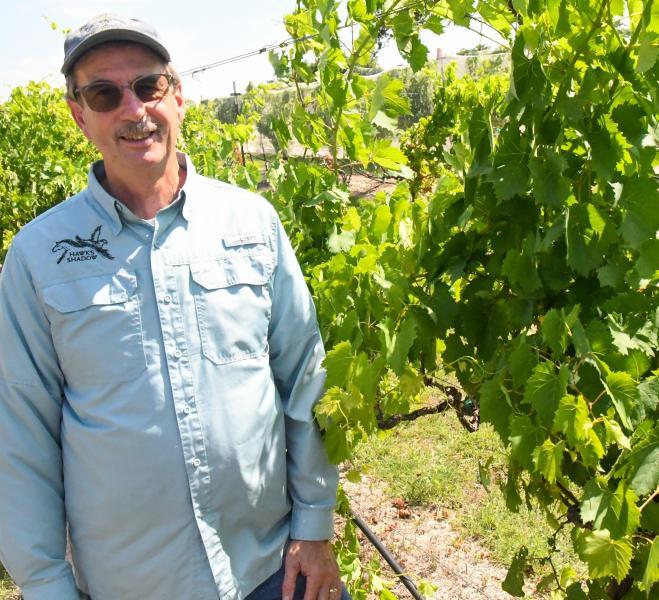 WHAT'S IN A NAME

What has four legs, stands 16 hands tall, and likes to act like a giant lap dog? That would be the winery namesake and family horse — Hawk's Shadow.

“We've had livestock forever and Carol ended up buying Hawk's Shadow; that was his registered name. We bought him as a yearling and had him for 22 years,” Doug said. “He would literally follow me around and seemed to take joy in taking my hat off, pulling tools out of my pocket. One time he took a chainsaw out of the back of my truck and put it on the ground. Generally speaking, make himself a complete nuisance. He was like a kid that just wanted attention.”

Just before Hawk's Shadow could turn 23 the lovable scamp developed cancer and was laid to rest.

“So, when we were looking at a name, Hawk's Shadow was an easy choice. He was a lovable part of our family, and had a remarkably interesting name,” Doug said.

In April of 2020 they became the owners of another precocious horse, when Foxy Shadow was born.

Doug said there's a lot of negative remarks he could make about a year with a pandemic. But if there was a silver lining it came due to limited travel restrictions and people staying closer to home.

“One of the positive things, from this terrible moment in our history, came due to extremely limited travel, or virtually no travel, outside of the state. Certainly not outside of the US,” he said. “People who had planned trips to Europe, or even California, those who were big wine people, had to change their plans.”

He felt many turned to the Hill Country, the wine region of the state, for a new experience. As a result, his business began to flourish toward the last quarter of 2020.

“Two things came to a head. People were wanting to try and escape a little bit and do something local and safe, so they did start visiting the wine regions,” Doug said. “Secondly, people had been cooped up for eight months and pretty much consumed all the wine they had in their house. So, they had to go refresh their wine stash. We saw some really great wine sales in the last quarter of 2020 and it's continuing.”

Moving ahead the group has purchased a food trailer to satisfy customers wishing for a bite.

“We're basically working on getting all the permits. The food trailer business is now Foxy Shadow, LLC.,” Doug added. “The plan is to do a high-end Tapas kind of thing — like beef tenderloin and lamb lollipops — maybe some shrimp and scallops or salmon.”

The goal is to provide smaller portions but higher end foods.

A couple of months from turning 66, Doug has no plans of slowing down.

You can find Hawk's Shadow Winery and Vineyard located at 7500 McGregor Lane in Dripping Springs.