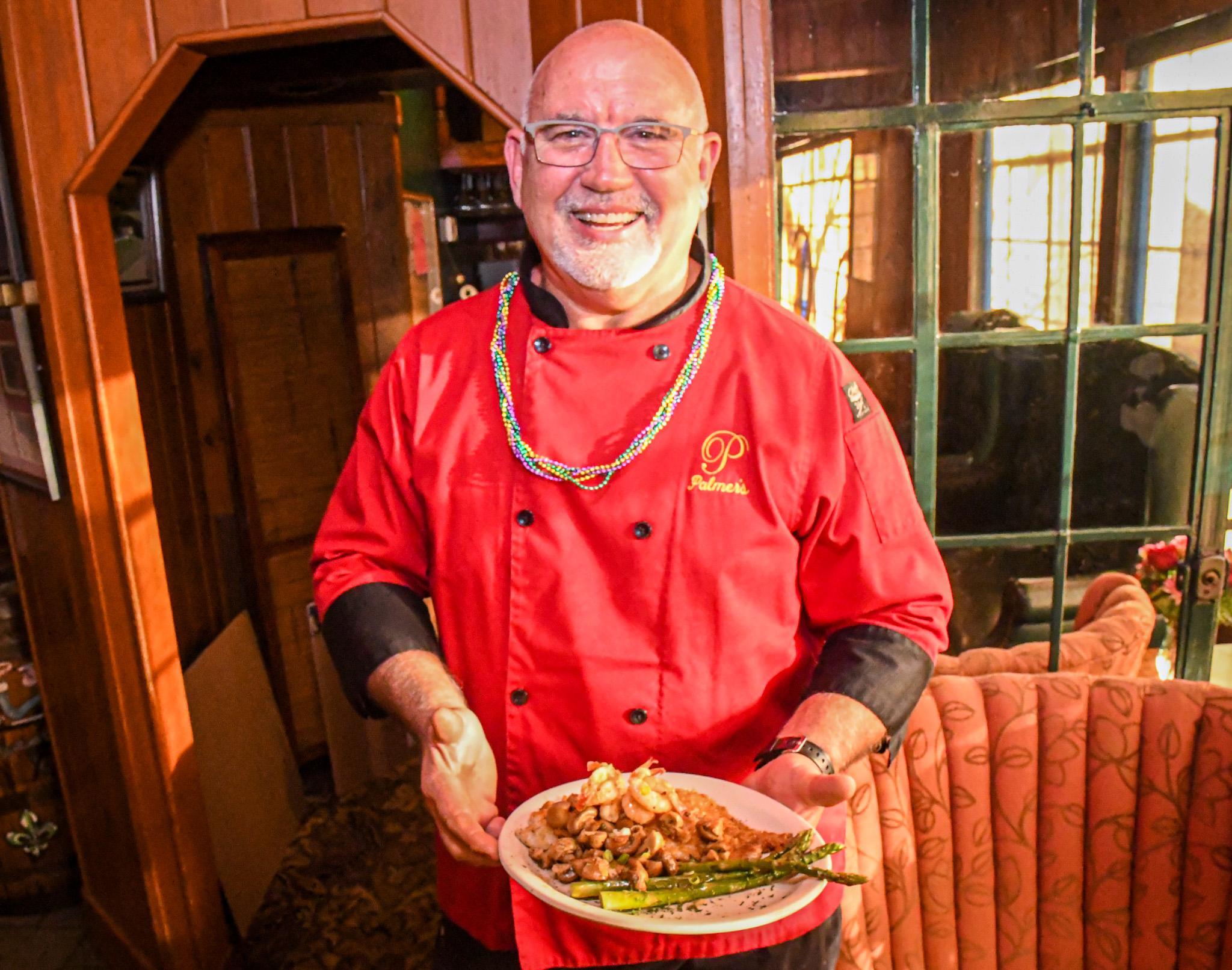 According to the Mistick Krewe of Okeanos, beginning this week, good times will be rolling as the organization recently issued a proclamation announcing the return to Mardi Gras revelry for the 2022 Carnival Season in San Marcos.

“I’ve been shocked at the response over the years, and how everyone has loved it and had such a great time putting it together,” Krewe Captain Diana Baker said. “It grew so fast we had to move it from its original location — my house — to the Price Center.”

She said it wasn’t much longer before the organization applied for nonprofit status with its goal to not only bring peace to the neighborhood by having a parade, but give funds raised to purchase musical instruments to children in San Marcos CISD who could not afford them. In fact, last year the Krewe donated more than $2,000 worth of musical instruments to the Goodnight Middle School Orchestra.

Baker said she recalled growing up in New Orleans that Mardi Gras was very much a family time.

Baker said it brings back a lot of memories that “pull in her heartstrings” and hopes that it does the same for San Marcans attending.

Festivities began when the Krewe marked the beginning of the Carnival Season with its Twelfth Night Ball on Jan. 8 where Wayne Kraemer and Ann DuPont were announced as King and Queen Okeanos X.

Celebrating its 10th year, the Krewe has multiple events scheduled throughout the upcoming week culminating with its parade, billed as the “best parade west of Galveston,” on Saturday, Feb. 26, beginning at noon. The theme “Okeanos Salutes San Marcos,” will feature a unique combination of bands, walking groups and floats. 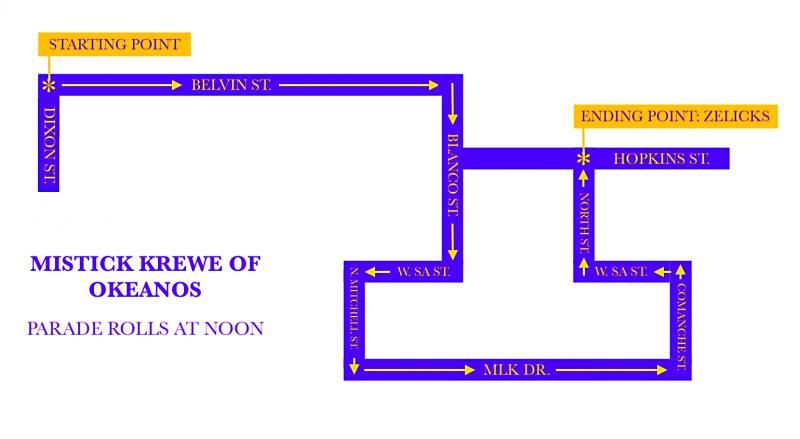 But leading up to the parade a handful of local eateries will kick things off participating in restaurant week. Beginning today patrons can dine on flavors reminiscent of what visitors might experience in New Orleans. Palmers, Root Cellar, Tap Room and Soulful Creations will be dishing up delectable culinary creations like Shrimp Po’ Boys, Steak Diane … even Shrimp Etouffee and Creole Cheese Grits. Customers will be able to purchase these Mardi Gras influenced dishes until March 1. The Craft House and Blind Salamander will be serving special New Orleans style drinks; Craft House will serve frozen hurricanes, while the Blind Salamander will serve frozen margaritas.

Following the parade, on Monday, Feb. 28 will be the Yardi Gras Contest, an event that began last year due to COVID-19 concerns. The event was such a success that the organizers decided to continue the fun.

Residents are encouraged to show their spirit by decorating their home.

Participants can register their entries via the Mi stick Krewe of Okeanos website: (mistickkreweofokeanos.com).

The contest rules are simple. Do not cover/ interfere with any fire safety equipment or walkways and keep everything “PG.” Homes must be located within the City of San Marcos city limits and ETJ. Krewe Board Members will judge the winners. Judging will only include the portion of your yard/house that is visible from the driveway or street. Winners will be announced on our social media pages, website, and San Marcos Daily Record on March 1.

This year’s categories are as follows:

Entries will be judged on:

• SPECIAL EFFECTS: “Dazzle us with your special effects, including lights and mechanical effects to surprise and entertain everyone,” the Krewe said.

• CREATIVITY: “Use your imagination — express yourself,” the Krewe said.

• SPIRIT: “Show us a Mardi Gras-based theme that focuses on an overall sense of the Mardi Gras spirit,” the Krewe said.

Finally, on March 1, an artist reception and whiskey tasting will take place at Palmers beginning at 5 p.m.

A commemorative poster, the third in their series, was designed by local artist Christopher Barnett, and will also be available in two limited editions: a Remarque edition (members only), and a signed and numbered edition.

The Krewe of Okeanos is a not-for-profit 501(c) (3) corporation, Texas Council for Music and the Arts, Inc. (“TCMA”). Its by-laws stipulate that TCMA is formed to support music and the arts in Texas through activities of the Mardi Gras celebrations. In the manner of other Mardi Gras krewes, the organization takes its name from a mythical entity, Okeanos, the Greek deity of the rivers. In following the tradition of ancient Twelfth Night [after Christmas] / Epiphany celebrations, a king and queen is chosen for its festivities which end with a parade on the Saturday before Mardi Gras and Ash Wednesday, the beginning of the Christian Lenten season. The Krewe chooses its king and queen to honor those who have made special contributions to historic and cultural preservation in San Marcos and have made special efforts during their lives to make San Marcos a better place to live.

The organization began when neighbors decided to liven things up in the dreary months of January and February, and the inaugural Twelfth Night Party began in 2012.

Jerry Moore, who was among those instrumental in forming the first San Marcos historic district, the Belvin Street Historic District (1974 local, 1976 National Historic District) was the first to be honored for his contributions to historic preservation in San Marcos. He and his wife Nelwyn were the first 12th Night King and Queen.

Their first parade described as a “humble event,” began the following year with a quick jaunt down Belvin Street with the royalty Hill Rylander and Dottie Sims. The two were king and queen and bravely faced the elements on the back of a farm trailer hastily decorated with palm trees during a chilly drizzle, and the only float in the parade.

In the years to come both the Twelfth Night Party and the parade grew and Wayne Kraemer added a popular brunch party on the Sunday after the parade. Soon the events outgrew in size what a private home could contain and to allow the organization to grow and officially forming in 2015.

ROYALTY THROUGH THE YEARS 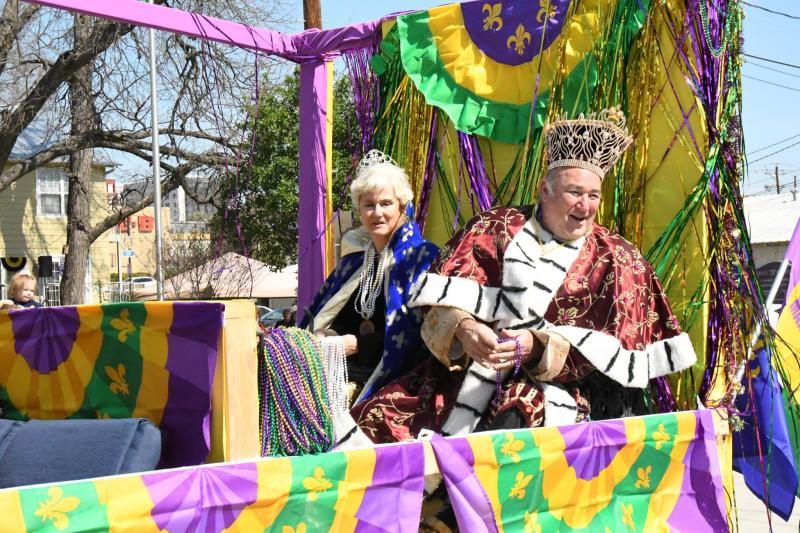 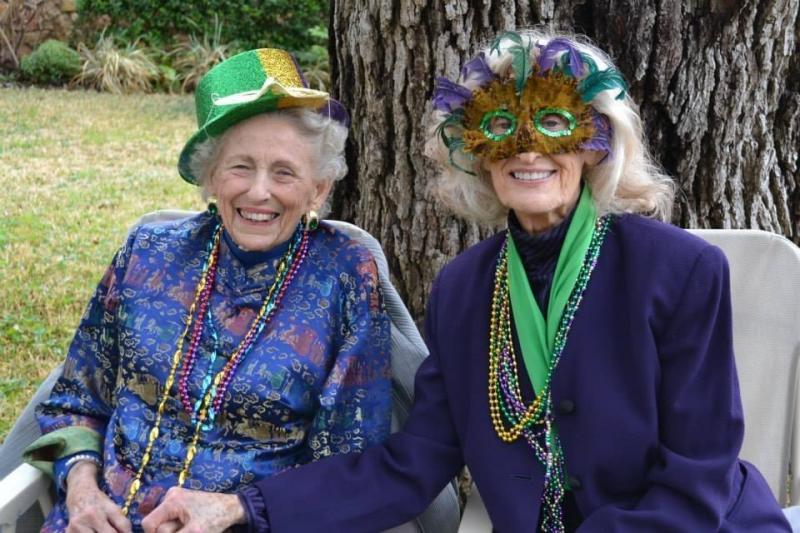 By the King & Queen of Carnival in San Marcos: King and Queen Okeanos X, the merry monarchs of Mardi Gras in San Marcos, Texas, send greetings, and announce with pleasure, our intention to return for our annual celebrations and traditions this coming Carnival Season.

In particular, we look forward, with boundless exhilaration, to the return of our ninth annual Grand Procession on Saturday, February 26, 2022, which will unfold at noon with all of the joyousness and beauty that our Krewe can muster, and where the wondrous art and exuberant music of Carnival shall once again fill the streets of our beautiful city.

This year’s parade theme is “Okeanos Salutes San Marcos” and we call on individuals, groups and organizations who love this city, to create a float or other entry in this festive tribute to the City of San Marcos.

The Krewe laments the continued presence and existence of circumstances that pose health concerns for our citizens. It is our intent to act cautiously and abide by governmental guidelines for safety.

We look forward with Great Anticipation to our fantastic revelries and Celebrate the 10th Anniversary of our glorious reign in our beloved city of San Marcos.