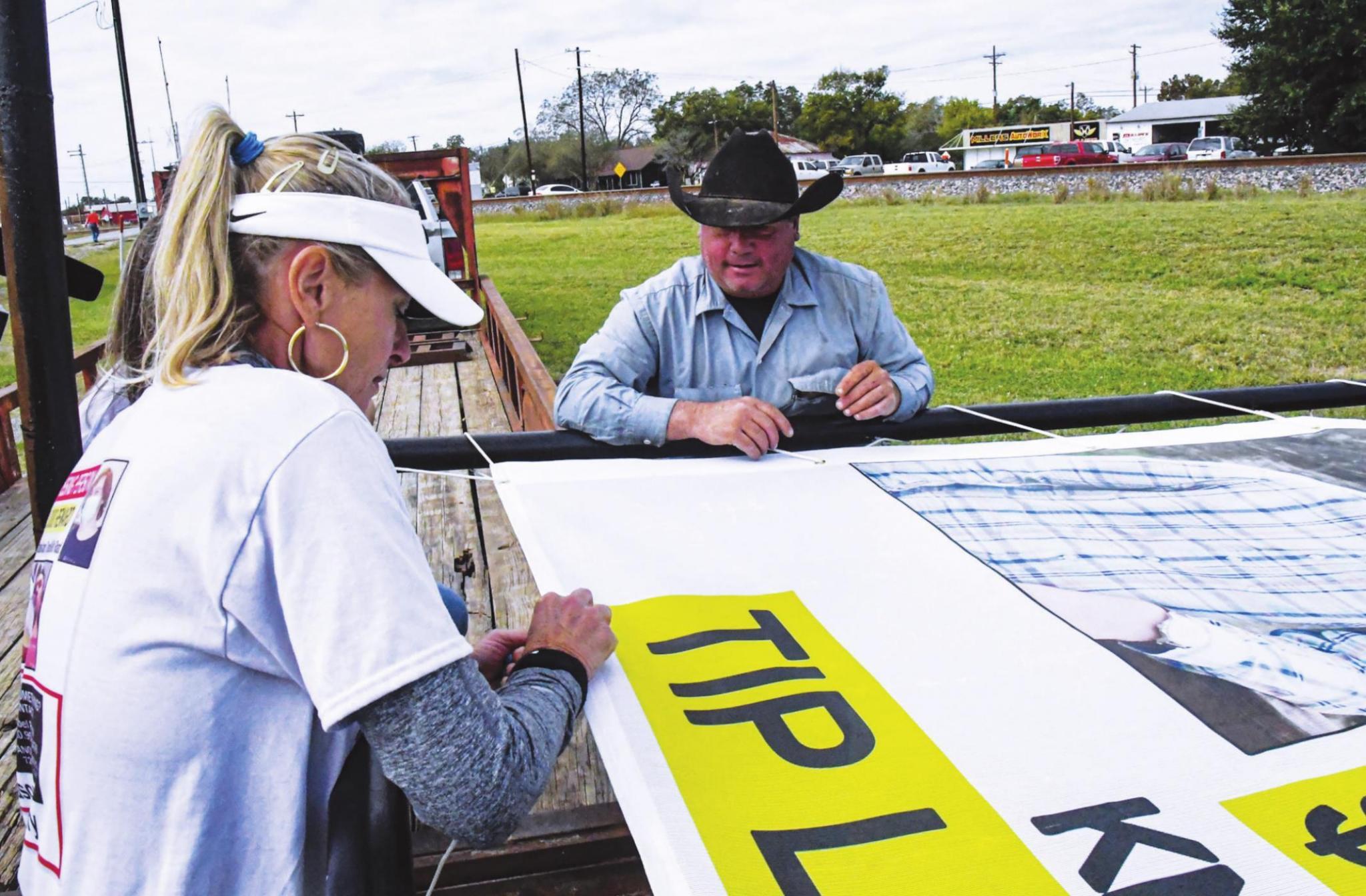 'ALL YOU CAN DO IS PRAY': Friends, family gather to raise banner seeking help to find Jason Landry

LULING — Hundreds of thousands of people go missing each year, according to the FBI.

In 2020, more than 540,000 people went missing, including more than 340,000 juveniles. One of the missing was Texas State University student, Jason Landry.

Statistical data as such is little comfort to those who are desperately searching for loved ones, their pain real. But it underscores the need for friends and acquaintances to come forward with any information as to his disappearance.

On Friday, a dedicated group of friends and advocates of the Landry family gathered along a roadside in Luling to erect a banner with several images of Jason emblazoned on it asking for the public’s help. 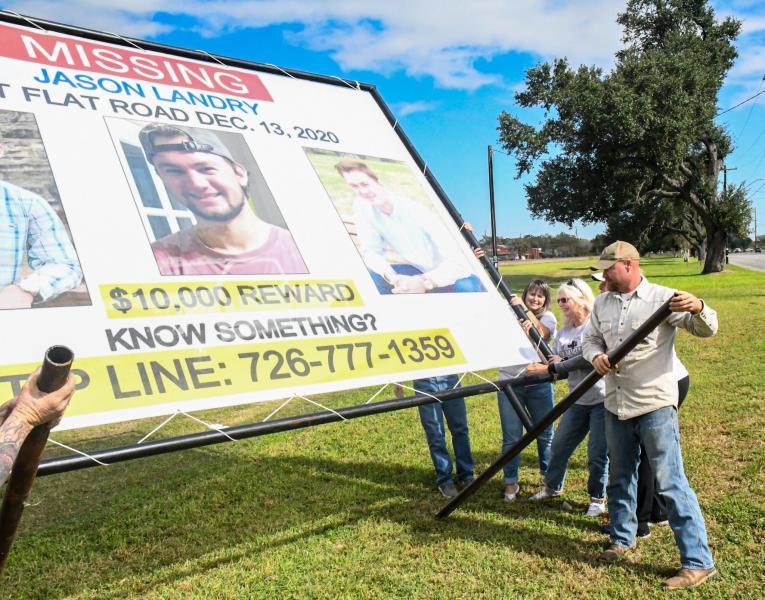 “It's amazing to me so many people have come together to make this happen,” said Lisa Landry, Jason’s mother. “I wasn't a part of it. I mean, they included me, they took care of all of it, and it's a great idea. It's something we're just so grateful for. Maybe something will come of it.”

Private investigator Abel Pena with Project Absentis — a nonprofit — said he and his partner are still interviewing people.

“My partner Stu Gary and I have six people on the team now,” Pena said. “We’ve got an analyst, several other investigators, two civilians … we’re just looking at everything, including witnesses. We've got much more to do, and more people to interview, so it's just, it's an ongoing process.”

Catherine Shellman of San Marcos, friend, and volunteer of finding the answers to the search for Jason, knows all too well the pain of losing a loved one.

“My daughter Tiffanie was murdered in 2010. She was in an abusive situation and was also a Texas State student,” she said. “I used to think there was nothing worse than losing your child. There is. It’s not knowing.”

She said she “bulldozed” her way into becoming a part of the search for Jason and has been very passionate since.

Lisa referred to the afternoon's efforts as “amazing,” considering she hadn't even met some of Friday's volunteers.

“This is amazing, trying to help us in every way they can that are here they are all doing so much for us. Some of them I’ve never met,” she said.

“We're just so grateful for all the people that are praying for us,” Lisa added. “And then are doing anything they can. Most people all you can do is pray. It still means so much to us. I can't get over how many people say they still pray daily. That’s huge.”

Investigators previously established the following timeline of Landry’s travel prior to going missing, according to the Caldwell County Sheriff’s Office:

•Landry drove his vehicle on State Highway 80, passing under Interstate 35 in San Marcos at 11:05 p.m.

•Landry arrived in Martindale and continued south on Highway 80 at 11:11 p.m.

Investigators said as he drove through the intersection of Hackberry Street where Highway 80 turns into Austin Street, Landry quit using the Waze application and began using Snapchat on his cell phone. CCSO stated that it is believed Landry continued through the intersection, driving onto east Austin. Officials say at this intersection, Landry’s digital footprint stops, however, it is believed that he continued onto Spruce Street, which turns into Salt Flat Road.

Landry’s vehicle was found abandoned at the 2300 block of Salt Flat Road, approximately 31 minutes after midnight on Dec. 14. CCSO stated that Landry’s vehicle was found with the lights on, keys in the ignition and the front passenger side door locked. Officials said the vehicle was involved in a single-vehicle collision, most likely from overcorrecting on the gravel road, and spun off the roadway. Officials said the rear driver’s side corner made initial contact with a tree on the east side of the roadway, which propelled the front driver’s side into another tree and barbed wire fence. CCSO added that there is no evidence that any other vehicle or outside force was involved in the collision and investigators are “confident” that the contact with the tree and fence was the only contact the vehicle sustained. Neither the volunteer firefighter who discovered

Landry’s father collected the phone and attempted to locate the scene of the accident, CCSO said, stating that he found articles of his son’s clothing — shirt, shorts, socks, underwear, slide sandals and a wristwatch — approximately 900 feet from the collision. Investigators processed the clothes and found a single blood smear, showing no indication of serious bodily injury, officials said.

Investigators later found a backpack, ball cap, plastic bag of personal toiletries, and a tumbler with his deceased beta fish in it approximately 900 feet from the collision scene — north of where the clothing was recovered by Landry’s father.

According to the CCSO, Jason Landry’s backpack contained a small amount of marijuana, a laptop computer and gaming equipment.

The Caldwell County Sheriff’s Office assumed the lead role in the investigation on Dec. 18 and continues to work with various outside agencies and organizations.

CCSO said there is no evidence that an unknown person of interest is involved in the incident and investigators believe there is no ongoing threat.

Caldwell County is asking for the public’s help with any additional information that may further the investigation. Officials are asking members of the public who have game cameras on private property or private surveillance video from the area to review that as soon as possible and can contact the sheriff’s office for assistance in reviewing the video.

In the months following Landry's disappearance, over 2,000 hours have been spent on the case with 1,336 miles of ground covered — approximately 57.2 square miles — fixed and rotor wing assets have been used over 382 square miles, and over 36,000 UAV images have been captured and analyzed.

Recently, CCSO and TEXSAR conducted a oneday search on Oct. 16.

Smaller searches and field verifications have taken place since a large search in February, CCSO said.

Nick Castillo contributed to this report.