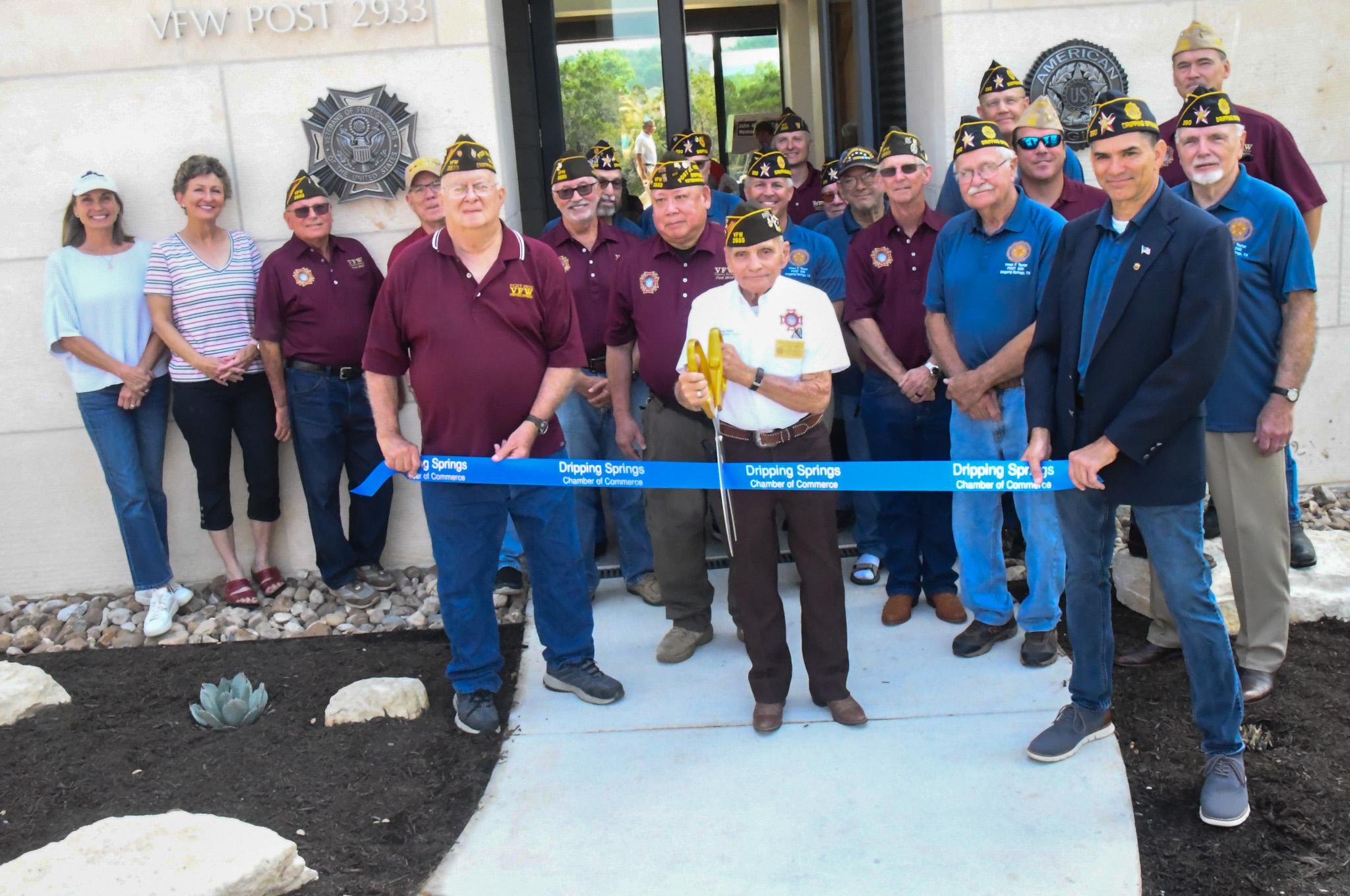 The first building on the Patriots’ Hall of Dripping Springs property opened as a standing room only crowed gathered to celebrate on Saturday. Above, Shorty Barnett, a former VFW Post 2933 Commander, leads a ribbon-cutting ceremony. Below, Kathryn Chander, founder of PHDS, speaks to a crowd gathered. Daily Record photos by Lance Winter

DRIPPING SPRINGS — It was standing room only as a huge crowd gathered to celebrate the opening of the first building on the Patriots’ Hall of Dripping Springs property.

Thanks to Austin philanthropists John Paul and Eloise DeJoria who gave $1 million from their JP’s Peace, Love & Happiness Foundation, the 1200-square-foot Meeting House for the local VFW and American Legion Posts on the PHDS property is now a reality.

The event took place Saturday — Armed Forces Day — at its 10-acre permanent retreat where veterans and their families can find support. Along with the Meeting House plans include a 7,100-square-foot main gathering hall for therapeutic workshops, employment and educational seminars, vet-to-vet mentoring, and social activities; a wellness center with VA claims assistance; and, a fishing pond, playscape, vegetable garden, obstacle course, ADA walking trails and more. 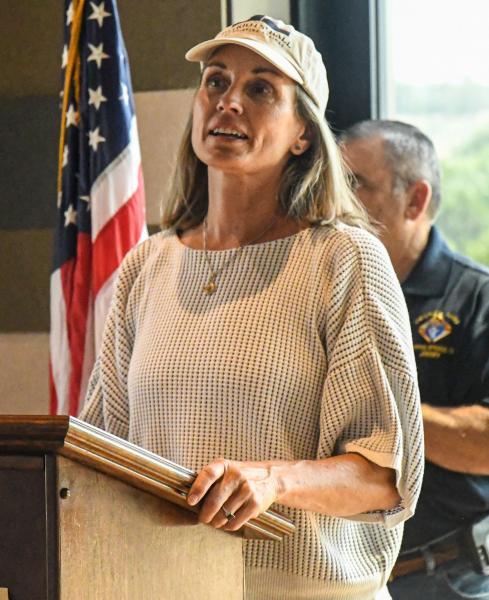 “Even though the Meeting House has been in use for several weeks, watching Shorty cut the ribbon made it very real,” Hetrick said. “There was a flood of emotion because he is not only a veteran, but he is my friend — he’s Kathryn’s friend — and his flier at Founders Day 2017, telling the community the veterans needed a place, is what brought people together to form the Patriots’ Hall of Dripping Springs nonprofit.”

Hetrick said the Meeting House fulfills their original promise to Shorty and local veterans for the VFW and American Legion posts to have a place of respect.

“Now we embark on fulfilling the bigger vision formulated by our PHDS board and donor partners to create a permanent, family-friendly retreat and resource base to serve all veterans,” Hetrick added.

Chandler said she was inspired by her dad, a Vietnam veteran, now living in California.

“I was only four when my father returned from two tours of Vietnam,” Kathryn said in a statement. “But my mom told me he came home a very different person. So, I’ve only known him as an extreme introvert, basically a hermit. But now he is surrounded by other veterans. He listens to the military doctors, has made some incredible friends and is thriving. Veterans get each other. Veterans need each other, and John Paul gets this. He and our community have stepped up big time to make this happen and we can’t thank them enough.”

Veterans’ specific needs were at the forefront of designing Patriots’ Hall, which is in the permitting phase.

“While brainstorming our mission, our Board took an in-depth survey of veterans’ needs and we applied this survey to every aspect of our design and build,” Hetrick said. “In fact, the majority of the PHDS board and advisory board are veterans and always will be.”

Jeff Wells, board member and Army US combat Veteran said he’s on a mission.

“I can tell you the needs in Central Texas for Veterans are tremendous,” Wells said in a statement. “Unemployment rates, mental health, and family issues are all front-of-mind for Veterans, and the Patriots’ Hall addresses all of these issues, along with other basic needs. The largest U.S. Veteran population in the world resides between Fort Hood and San Antonio. The Patriots’ Hall is right in the center of it all. Veterans helping Veterans. That’s our mission.” 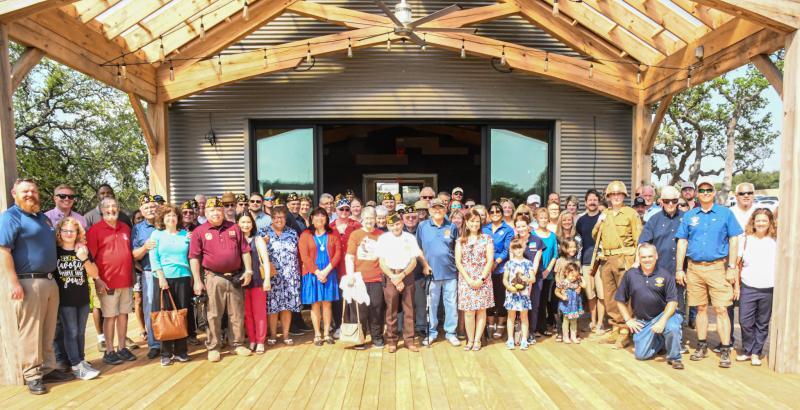 The first building on the Patriots’ Hall of Dripping Springs property opened as a standing room only crowed gathered to celebrate on Saturday. Above, guests at Saturday’s event pose for a photo to mark the grand opening. Daily Record photo by Lance Winter

PHDS is currently in the permitting phase for the larger gathering hall that will be called Patriots’ Hall. With expected completion in 2023, PHDS is still actively fundraising for that capital campaign. John Paul DeJoria recently announced a $500,000 matching challenge towards that end. The entire nine-member, veteran-majority board of Patriots’ Hall is extremely grateful to the many businesses and community members who have stepped up to make this vision achievable. Please visit patriotshall.org for more information and to find out how to support future progress.

Donations can be made to support Patriots’ Hall of Dripping Springs directly through their website at patriotshall.org. Patriots’ Hall is scheduled to be complete in early 2023.