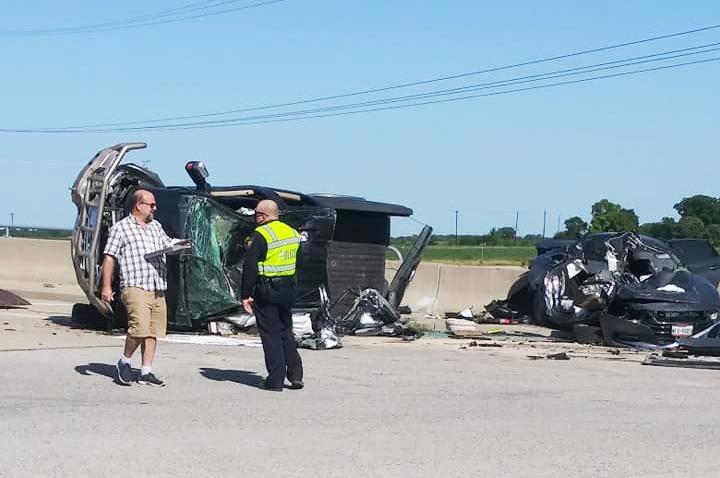 Above, a car collision that took place on June 10, 2020 in Lockhart resulted in the death of Jennifer Miller. Following the accident, her life partner Pamela Watts is seeking justice. Photo courtesy of Big Boyz Towing - Lockhart, Texas

Editor's Note: This story is a follow-up article regarding the death of Jennifer Miller in a car collision involving an off-duty San Marcos Police Department officer. To read the first story see https://www.sanmarcosrecord.com/breaking-news-news-news-mobile-news-alert/woman-seeks-justice-death-partner.

After a grand jury no billed a case against San Marcos Police Department Officer Ryan Hartman for a charge of criminal negligent homicide in a fatal collision in 2020, the survivor’s lawyer believes the case may surface Brady Evidence.

The Brady Doctrine requires prosecutors to disclose exculpatory evidence, or evidence that might clear guilt, in the government’s possession to the defense.

McMinn wrote to SMPD Chief Stan Standridge and Hays County District Attorney Wes Mau that he felt he had a duty under the Brady Doctrine to disclose information from this incident that should be disclosed in DWI cases in San Marcos.

The collision happened on the afternoon of June 10, 2020 in Lockhart when Ryan Hartman, who was off-duty, was traveling eastbound at the 2200 block of Maple Street, and Watts and Miller were traveling southbound in the 1300 block of South Cesar Chavez Parkway.

According to Hartman’s deposition, police reports and forensic evidence, Hartman was driving 16 mph over the 30 mph speed limit on a partially gravel road with an open container of alcohol that was ¾ empty, talking on the phone, and he failed to stop at two stop signs before colliding with Watts’ vehicle.

Hartman refused to take a blood alcohol test on scene, resulting in the need for a search warrant and a delayed blood draw that showed no alcohol content, despite the open container.

“[Hartman's] an alcohol officer with SMPD, he’s a sergeant,” Watts said. “He knows what protocol is if you don’t take the blood draw at the scene, he knew they were going to take him into custody. He knew they would have to get a blood search warrant. He knew that would give his body the opportunity to metabolize whatever blood evidence there was.”

Because Hartman testified that he conducts Standard Field Sobriety tests in San Marcos for potential drunk drivers, McMinn believes that his failure to cooperate and refusal to take the same tests that he administers is Brady Evidence and it must be disclosed to the defense in future DWI cases.

“It's more difficult for the District Attorney to argue that refusal of the sobriety test is a sign of guilt because their own officers refuse to take the same tests,” McMinn said.

When the Daily Record asked the Hays County District Attorney’s Office if they would be considering this Brady evidence, District Attorney Wes Mau said he couldn't comment on Hartman specifically, citing Hays County Criminal District Attorney's Office policy. But he did say, "we take very seriously our obligations under Code of Criminal Procedure article 39.14.(h), which requires the prosecution to ‘disclose to the defendant any exculpatory, impeachment, or mitigating document, item, or information in the possession, custody, or control of the state that tends to negate the guilt of the defendant or would tend to reduce the punishment for the offense charged.’”

Watts is seeking justice for the death of her partner; in the criminal justice system to empower victims to speak at grand juries and to rein in the authority of District Attorneys to present evidence without the oversight of an audience. She has also asked for Hartman to give up his badge in a settlement of her civil suit, which he declined due to a need to support his family.

Hartman’s lawyer Jason Wilkes would not comment or provide an interview with Hartman regarding the case due to the ongoing litigation.

“There are a lot of fine young men out there protecting the general public that do live a legal life,” Watts said. “This dude crossed the line and he quite frankly nullified himself, in my opinion as a police officer, based on his deposition and his action at the scene, refusing to cooperate with police.”