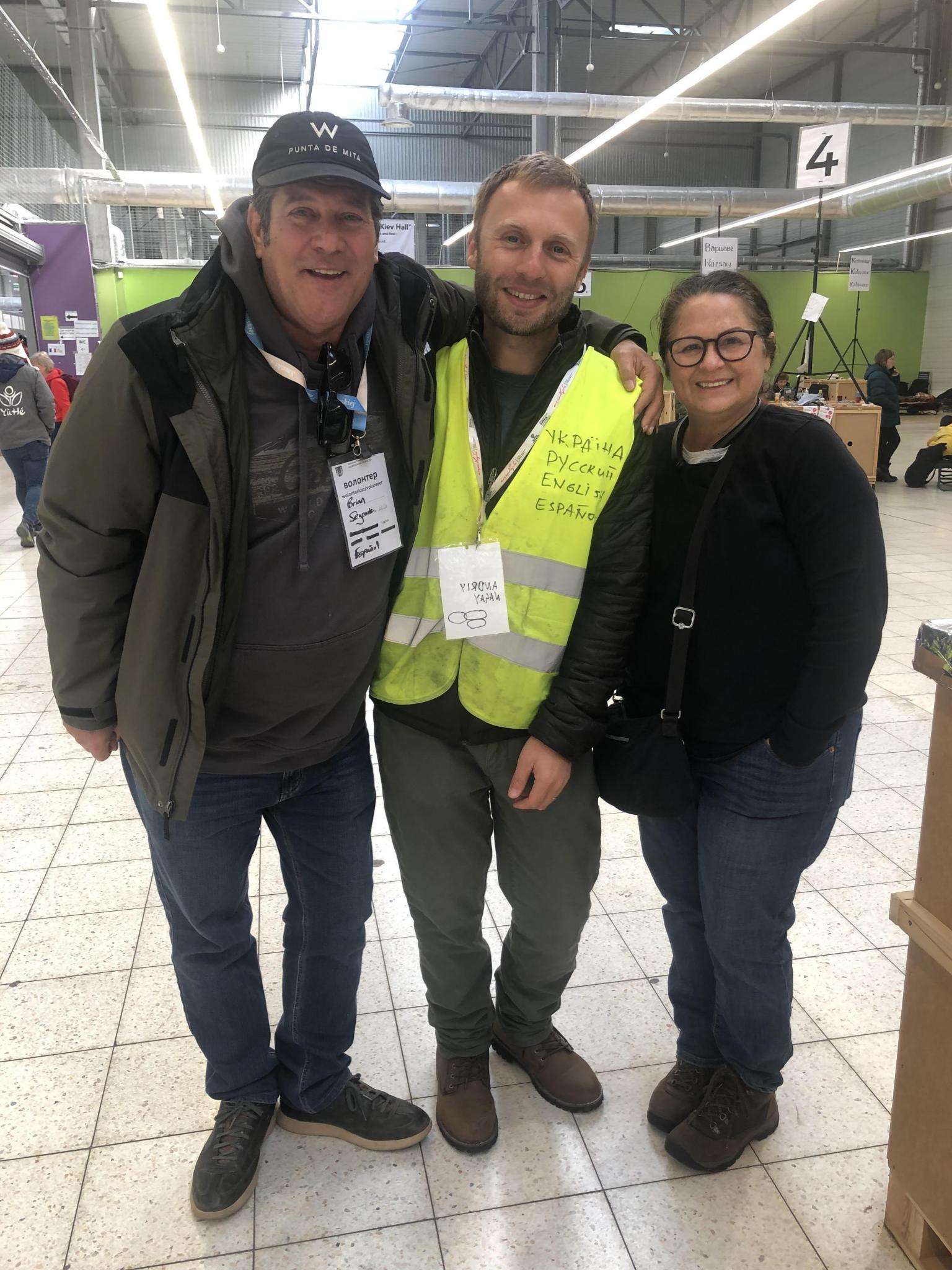 San Marcos couple Brian and Rose Segrave traveled to Poland during late March until April to help refugees trying to escape Ukraine as Russia invaded the country. Above, the Segraves pose for a photo with Andriy, a Ukrainian, who helped them during their time in Europe. Photo courtesy of Brian Segrave

It’s hard to see images on the evening news and learn of the atrocities taking place in Ukraine, and not feel something. Ordinary people just trying to live suddenly being forced to take only what they can carry and run for their lives courtesy of a brutal Russian dictator and his army.

At best, most everyone condemns actions like this — especially in the modern era — but few have the will to do anything about it. But that simply wasn’t the case for Brian and Rose Segrave. The San Marcos couple said the events unfolding in Ukraine were “unacceptable” and it was time to do something about it.

“Frankly, this was pretty spontaneous, seeing the news daily was annoying us,” Brian said. “We literally walked over to the personal computer and booked airfare and a car on Expedia. The situation was unacceptable to us. We’re not activist or cause types, not even particularly politically engaged. This just felt like an imperative to act.”

Once the couple landed in Poland in March, there wasn’t a moment to spare.

“We arrived in Krakow late, overnighted at the airport, and picked up our rental vehicle,” Brian said. “It was a Peugeot 508 that theoretically accommodated seven passengers, assuming zero luggage. We were reluctant to rent a minivan because snow and ice were forecast, but as it turned out, the 508 worked out just fine.”

Essentially, they were drivers working with like-minded volunteers in the refugee centers. They transported women and children to destinations where they either had friends, relatives, or a transportation connection. Particularly those family units that were more vulnerable or would be unable to navigate the mass transportation the Poles had organized.

“It was a three-hour drive down to Medyka, the border crossing, where many Ukrainians were arriving on foot,” Brian said. “Unfortunately, the police had a roadblock in place and were turning away traffic.”

Brian said they noticed the driver of the car in front of them appearing distressed with being refused access.

“We detoured and a few miles down the road were flagged down by the upset driver,” Brian said. “He was Lithuanian and spoke no English. Through phone app translation we learned he had a scheduled pick up of three children who were due to cross over on foot. We asked him to follow us while we sought a back road into the village.”

Brian said they didn’t find a back road, but what they did find was a Red Cross convoy and managed to sneak in behind it and were waved through by the authorities. As for the Lithuanian man — he found his passengers.

“It became clear to us this was not the right place to base ourselves as the Polish government was transporting the travelers to larger refugee centers a few miles from the border for registration,” Brian said. “It was, however, our first look at how the various aid organizations were operating; United Sikhs were offering replacement footwear and socks, World Central Kitchen had a great setup for meals and Caritas had established an area for rest, SIM cards and first aid.”

While trying to find some accommodations, Brian said they discovered the Red Cross unloading supplies and they directed them to Dolina Korczowa, a disused shopping mall converted into a refugee center.

“We registered there as volunteers and headed down to Przemysl, (the train station they keep showing on TV) assuming this would be a practical place to offer assistance,” Brian said. “This was a busier center and a bit chaotic. An aid worker there asked us to transport a small group to Berlin. This was a nine-hour run and we made it by midmorning the following day. Berlin was fantastically organized and as this group had relatives in Germany, their onward travel was arranged within minutes.”

The couple headed back to the border, stopping off in the Korczowa center. There they ran into Andriy, a Ukrainian, currently residing in Arkansas, who was volunteering as a transport coordinator.

“For the rest of our trip, Andriy pretty much assigned our passengers and routes,” Brian said. “We took a small family on a short run to Krakow.”

Back at Korczowa, the couple were then assigned a grandmother with three children, 16, 10 and 6. Destination Berlin — again.

“Berlin this time was overwhelmed with all accommodation in the city full,” Brian said. “Germany had laid on buses to secondary cities where citizens had volunteered to house Ukrainians on a short-term basis. Constanze, a volunteer aid worker, was fantastic in assisting us with onward travel for our group, although this whole process took about four hours.”

While heading back to Korzcowa, Andriy called Brian and asked them to do a pickup in Zosin, a tiny border crossing about 3 hours north of Medyka.

“The person was a psychiatrist and her two children, the younger being immunocompromised,” Brian added. “We were heading to Warsaw this time, where they were traveling onward by train to where friends live. Every single train out of Warsaw booked until the following day — we arranged a hotel for the family and took off again back to Korzcowa.”

Brian said the population of the refugee center had very much been reduced due to Russian blockades with smaller numbers of refugees crossing.

The couple made several more trips ferrying those looking to escape the invasion of their country.

Rose said the sights of families literally running for their lives, particularly with the children, were very distressing.

“Some were traumatized and would act up in the car,” she said. “By and large the adults were stoic and dignified, impressive under the circumstances. Maintaining phone contact with male family members still in Ukraine was priority No. 1 for them. We became experts on the Polish/German/Czech mobile phone systems and switching SIM cards on the fly.”

All together the couple was there a total of 14 days.

“We were fortunate to get a handle on how we could best be of use on Day 1 and hit the ground running,” Brian said.

The two made a commitment to pay the plane tickets, hotels, and car rental for themselves. They also launched a Go Fund Me account to cover gas and incidental costs for the refugees.

“As it turned out we received about $6,600 which was more than enough and left us with a balance we passed on to other independent operators,” Brian added.

Looking back, both said they’re still filtering through what they’ve experienced.

“We’re still processing this. I think we saw the absolute best and worst of humanity up close,” Brian said. “Individuals who made enormous sacrifices to travel to Ukraine and bust their humps although, like us, they had no history of altruism. Then by contrast others who cruise the border crossings to exploit young women or groups of thieves who steal refugee cell phones.”

The sheer volume of refugees was overwhelming, assisting 20 or 30 might seem somewhat futile. But as Andriy, who coordinated most of the transport, mentioned — it’s the Starfish story.

Once upon a time, there was an old man who used to go to the ocean to do his writing. He had a habit of walking on the beach every morning before he began his work. Early one morning, he was walking along the shore after a big storm had passed and found the vast beach littered with starfish as far as the eye could see, stretching in both directions.

Off in the distance, the old man noticed a small boy approaching. As the boy walked, he paused every so often and as he grew closer, the man could see that he was occasionally bending down to pick up an object and throw it into the sea. The boy came closer still and the man called out, “Good morning! May I ask what it is that you are doing?”

The young boy paused, looked up, and replied “Throwing starfish into the ocean. The tide has washed them up onto the beach and they can’t return to the sea by themselves,” the youth replied. “When the sun gets high, they will die, unless I throw them back into the water.”

The old man replied, “But there must be tens of thousands of starfish on this beach. I’m afraid you won’t really be able to make much of a difference.”

The boy bent down, picked up yet another starfish and threw it as far as he could into the ocean. Then he turned, smiled and said, “It made a difference to that one!”

We’re still processing this. I think we saw the absolute best and worst of humanity up close. Individuals who made enormous sacrifices to travel to Ukraine and bust their humps although, like us, they had no history of altruism.” — Brain Segrave