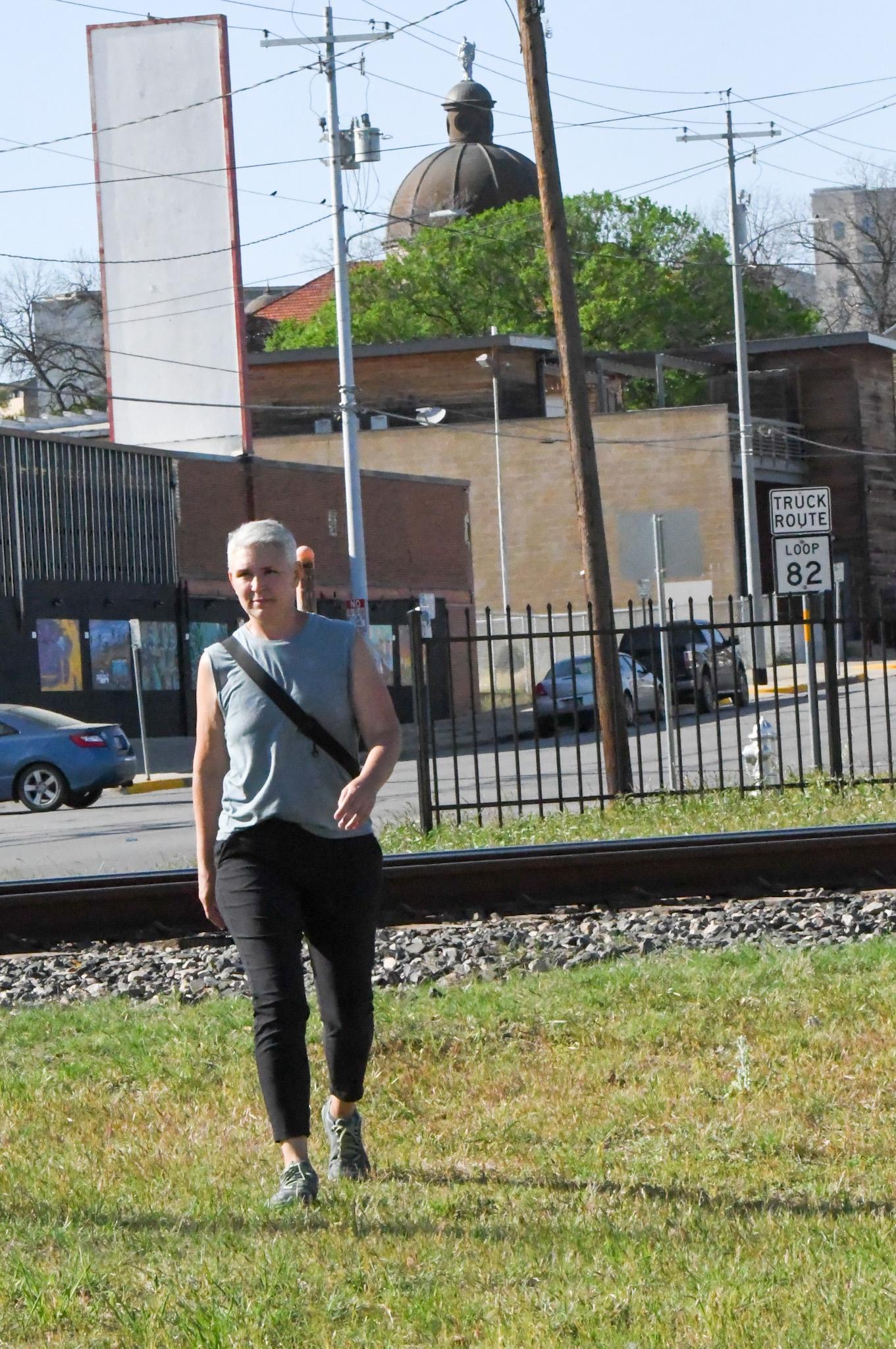 Katie Smith Deolloz (pictured above), a San Marcos resident, is preparing for the Spartan Death Race. The grueling competition is set for the summer in Vermont. Daily Record photo by Lance Winter

It’s the ultimate challenge — where participants push the levels of their endurance in hopes of just finishing the grueling 72-hour physical torture test — known as the Spartan Death Race.

Katie Smith Deolloz believes she’s got what it takes to compete in this summer’s event in Vermont. The self-proclaimed walking ambassador of San Marcos trains daily in anticipation of the challenges ahead and believes she’ll be ready when the time comes.

“I’ve been athletic my entire life,” Deolloz said. “I attended the University of Texas earning a degree in kinesiology, which is the study of the human body while in movement and was also a member of the Longhorns rowing team.”

Having always been interested in the mechanics of the human body, Deolloz was equally interested in how to take care of it … nutritionally.

“I had just completed the GRE, done all the prep work and was ready to go earn my master’s in nutrition at the University of Texas. But I just couldn’t get over the hurdle of the food guide pyramid and the atrocious recommendations that were made,” she said. “I view them as contributing to the disease management system we have now … where it’s not really about health. It’s about what drugs we can give you to treat your symptoms.”

She contemplated what to do next with building blocks she had and rather than going the traditional registered dietitian route, she chose to become an integrative health coach.

“I really enjoyed it more,” she said. “It takes a more holistic approach to human wellness. It’s not about just taking pills, or one type of exercise, or one special diet.”

But what really influenced her interest in nutrition she said was that her mom has a disease called Alpha One antitrypsin, an enzyme deficiency that leads to the deterioration of the lungs and or liver, like emphysema or cirrhosis.

“I was watching what was going on with my mom and how she was constantly on medications, but none of her doctors ever said anything about nutrition,” she said.  “I don’t want anyone to experience what she’s experienced, and I know there’s another way. So began my health coaching practice.

Along with her health coaching practice Deolloz is also a certified walking coach and has run numerous marathons.

“I love walking,” Deolloz said. “I love that walking is the most accessible form of movement for the largest number of people.”

As for the competition, the decision to participate didn’t come easy at first. Katie would tell you she had to set things straight in her head, first. She had just come off the trail/walk she had spent six months preparing for (American Discovery Trail) that was going to take her across the country. But unfortunately, she had to quit early into the walk because of a variety of issues that included wildfires in California, the place she began, COVID-19 restrictions, and her mother’s health.

“I got down, so what did I do? Even being a health coach that knew better. I went to a certain local restaurant I go to every morning when they opened at 9 a.m. and ordered two OJ mimosas and a bowl of oatmeal with butter and brown sugar, not the healthiest thing,” she said.  “So essentially, I was eating my feelings and that led to me gaining a huge amount of weight.”

But it happened one day when she decided enough was enough. She was tired of being sad and ready to get rid of the excess weight she had gained.

“It was around Feb. 6, I decided I was done carrying around this extra body weight,” she said. “I’m one of those people that when I make up my mind about something I’m going to do it. So, I signed up for BattleWolf Community Fitness.”

Weston Neiman, trainer with BattleWolf Community Fitness said when Katie began, she was immediately “committed to the process.”

“I’m not sure she had a specific goal at the time, but she knew she wanted to get better and simply focused on what small, but impactful, changes she could make to her habits to inch towards improvement,” Neiman said. “She did not come into the gym with unrealistic goals/timelines for improvement.”

He said she’s made huge improvements in a short two months which he attributes 90% to waking up at 4 a.m. every day, focusing on diet, walking to and from gym every class with a weight vest, losing more than 20 pounds, while improving muscle mass/bone density, and to her positive attitude and mindset.

“She has now entered herself into another uncomfortable scenario by signing up for the Spartan Death Race. I’m not sure if she has a specific goal of making it a certain distance or finishing the race entirely,” Neiman said. “What I do know is that she is now wanting to learn about herself and push her self-perceived limitations … the best way to truly grow spiritually, mentally, or physically.”

Neiman said she isn’t solely focused on the results but is pushing herself and “enjoying the ride.”

“If we could all act a little bit more like Katie, I think the world would be a better place,” Neiman added. “Catch her walking around town, shopping at the local meat market, doing yoga, or training hard at BattleWolf Community Fitness and wish her luck this summer at the Death Race.”

As a former Division 1 athlete Katie said it was a “humbling” experience to realize how out of shape she had become.

“You know, at 44, it’s tough,” she said.  “But I did it. The next day I got up at 4:30 a.m. and I like listening to podcasts in the morning. One that popped up in my download was ‘Collective Insights,’ I hadn’t listened to that one in some time.

She listened to an interview with Joe De Sena, CEO and founder of Spartan, creator of the Spartan Race.

“The topic was mental resilience,” said Deolloz. “I listened to it and midway through it he said to any of you listening, if you want to participate in the Death Race, send me an email and you’re in. I was like, okay.”

She paused long enough to fire up her computer and send the following email:

I accept your offer. I look forward to participating in the February 23 Winter Death Race.

To her amazement she said he wrote her back.

“How about we get you in the summer Death Race? See you in five months.”

She said she hadn’t even looked up what the Death Race was even about.

“I investigated it and it’s brutal. You’re crawling under barbed wire, running up a mountain. I mean, it’s just insanity,” she said.  “But it’s all about mental resilience and I’m going to show up to that; I’m going to give it my best.”

“Katie wanting to do the Death Race was, on one hand, a bit of a surprise to me — because it sounds dangerous,” David said. “On the other hand, Katie has always been someone to take on challenges that appear daunting at first glance.”

He said she once announced, and completed, a marathon without any training.

“In my experience, one way to ensure Katie would do something is for it to be a dare [or] challenge,” he said. “Watching her start to train and prepare for this latest challenge has been good to see since it clearly excites her.”

He said it’s also been good for him as he’s begun to join her on a few of her trips to the gym.

“I think preparing for and participating in physical and emotional challenges like this one, “The Death Race”, can lead to greater vitality and quality of life regardless of where one places in the competition,” he said. “I imagine that will be the case for Katie in this case.”

Since she began her workout regimen, she’s lost more than 20 pounds and last Wednesday — on her 45th birthday — walked 45 miles.

The one thing to remember is you can’t outrun or out-exercise a crappy diet, Deolloz says.

“One of the challenges is all this processed food in the Standard American Diet — SAD diet,” she said. “So many people are mineral deficient, vitamin deficient, especially in D3 and Zinc. They’re for your immune system and some people already have compromised immune systems.”

In preparation for the race, Deolloz is on the carnivore diet designed as an elimination diet that places people into ketosis and gets rid of anything they may have allergic reactions to.

“So, right now I’m eating animal fat and protein with virtually zero carbohydrates,” she said. “It’s been exciting for me. My body is responding very well enabling utilizing ketones for energy as opposed to glucose.”

She would encourage folks to strive for better health.

“It’s simple, but it’s not easy,” Deolloz said. “You are capable of choosing a healthier lifestyle, but you’re going to need to be patient with yourself and take it one step at a time.”