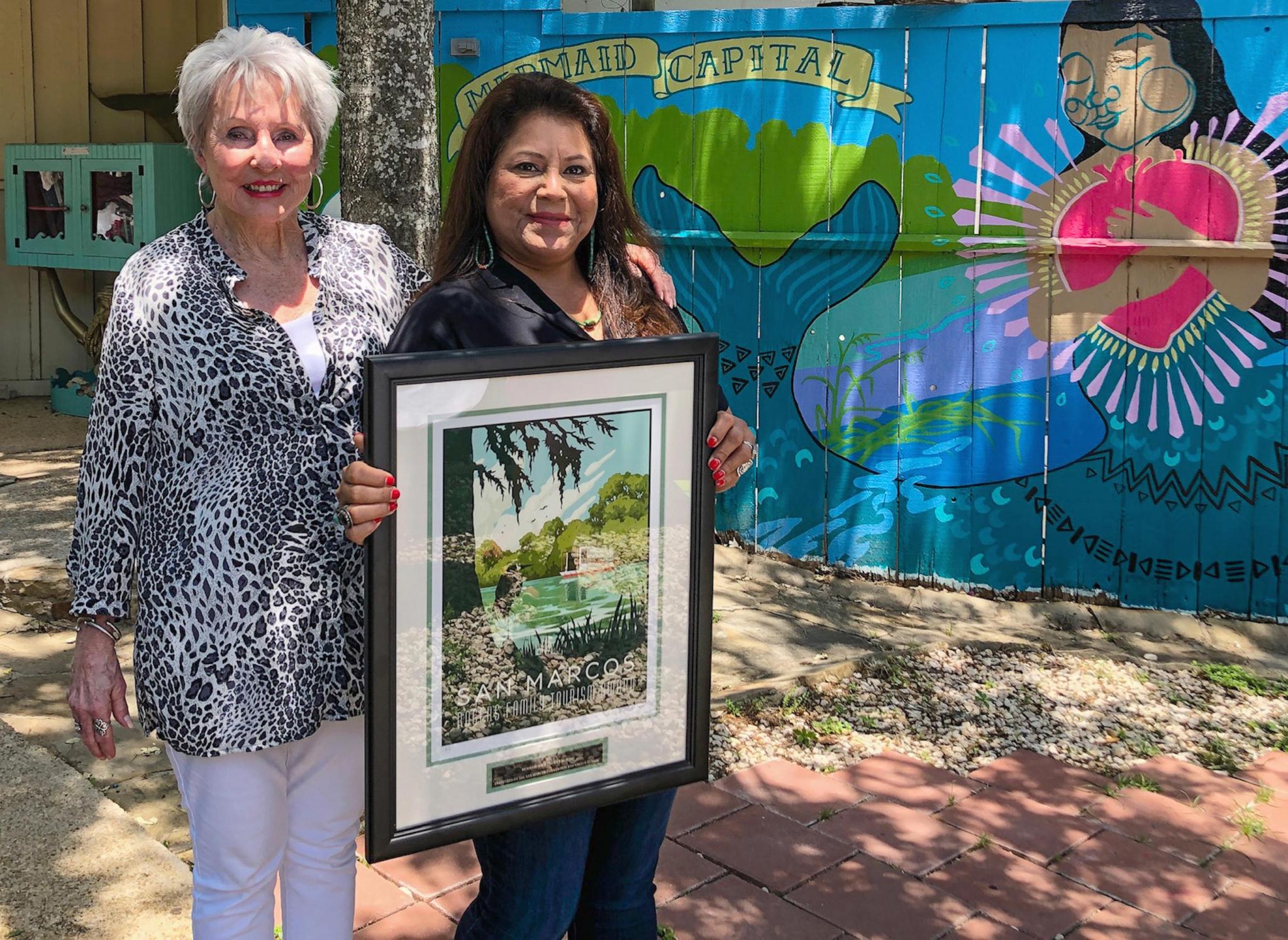 July Moreno was happily surprised when she received the call, she had been nominated for the Rogers Family Tourism Award — although it wasn’t the first time.

The awards were presented during the National Travel and Tourism Week reception on May 6.

“I've been nominated in past years, so I really didn’t think much about being nominated again,” said Moreno, founder of Mermaid Society SMTX.

But when she found out she was an actual award winner last weekend she was overcome with joy.

"I am honored to receive this special recognition on behalf of Mermaid Society SMTX and all who have contributed in one way or another to the advancement of our mission,” Moreno said. “I am humbled to be nominated by Shirley Rogers and Cory Glisson-Munier. I am so proud to have been born and raised in San Marcos and get to play a part in championing my hometown of all the things that make it beautifully unique.”

Shirley Rogers said in her nomination that Moreno launched Mermaid Society SMTX utilizing the symbol of the mermaid as a tribute to the city’s heritage and the history of Aquarena Springs.

“The goal of this venture, in July’s words, is 'to stimulate tourism, foster community pride, generate revenue for local businesses and help the city become recognized as an art-centered progressive city',” Shirley Roger’s nomination read. “An annual festival, Mermaid Splash, is to celebrate everything mermaid. Festivities include the Mermaid Ball, the Mermaid Promenade (parade), Aqua Faire, the ‘Mertini Contest’ and other events bringing together local businesses and the art community.”

Kathryn Welch, with the San Marcos Art League, was also chosen as a winner.

“I am very honored to be one of the recipients of the Rogers Family Tourism Award,” Welch said. “It is for my work in the Arts via the San Marcos Art League that I was kindly nominated, but there are so many people working faithfully to keep the Arts alive in San Marcos.” 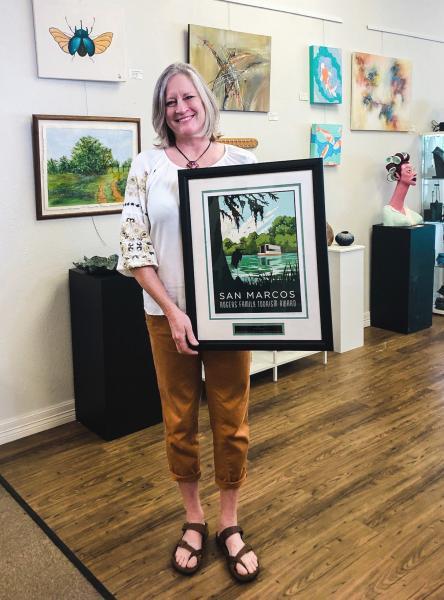 Above, Kathryn Welch, with the San Marcos Art League, poses with her Rogers Family Tourism Award.

She said it is a community that they are working diligently to build, to include every artist who seeks to share their voice and to provide outlets for artistic expression.

“The Arts are essential to the life of a community, and we are fortunate that the City of San Marcos is supportive of our endeavors,” she added.

Garrie and Ronnie Borden said in their nomination of Welch that she has been instrumental in significantly expanding the San Marcos arts scene to attract both locals and tourists to exhibit, sell and purchase original art.

“Kathryn first became a member of the Art League by getting involved in 2016 with Art Squared, a monthly open-air arts market located at San Marcos’ town square,” the nomination read.

“As President of the San Marcos Art League from 2017 to 2020, Kathryn expanded membership from around 35 to over 130 members.  While serving as Art League president, she took over as the Art Squared Market Director.  Under her leadership, this juried market, now in its ninth year, showcases artists and fine craftspeople from Central Texas.”

The Art Squared typically attracts 600-700 visitors on a bad weather day and over 1,200 people when the weather is good, the two said.

The Rogers Family Lifetime Achievement Award was given to Tim de Jong, owner of Wimberley Glassworks.

“I must admit I was surprised,” de Jong said. “As you can imagine this past year has been difficult to navigate through. Almost every day the business landscape changed. I was forced to make some very difficult decisions with my staff. It was excruciatingly difficult.” 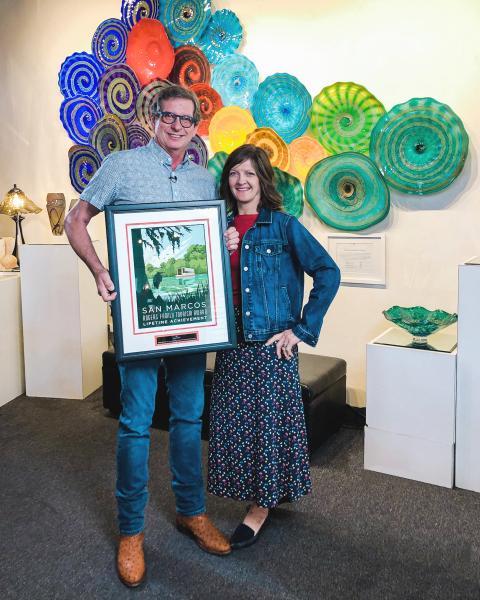 Above, Tim de Jong stands with his Rogers Family Lifetime Achievement Award, which was given out during National Travel and Tourism week.

He said the fact that it was his staff that nominated him was the ultimate compliment.

“I became emotional when they read the statement that was attached to the nomination,” he added. “A lot of times employees don’t see the difficulty that an owner goes through to keep the company afloat while following the company’s mission to the letter.

“You see, it doesn’t really matter how difficult it was to navigate the year's challenges ... our mission was to share our craft, educate the public about glass through history and humor. It was this year especially. We became a sanctuary for people. It was a time of extreme stress and seclusion for people. We became the lifeline. In turn they became ours.”

De Jong said it was an incredible honor to be recognized for what they do from their hearts.

“Tim has had a life-long desire to share his passion for glassblowing to others, which he’s fulfilled for over 36 years now,” his staff said in their nomination of their leader. “For the past 13 years, he’s shared his craft with 24,000 viewers annually in his San Marcos studio.”

In their remarks they mentioned locals on day trips, and visitors world-wide have experienced the thrill of live glass blowing demonstrations.

“Tim says, ‘I like the immediacy of glass. You just can’t work the material without pouring your soul into it. Once you pick it up, you can’t put it down. It’s a medium with endless possibilities, fragile yet liquid, beautiful, yet untouchable when hot. I love demonstrating, showing people how the material moves and works, and to watch their preconceptions disappear as their eyes open to the beautiful world of glass.’”

In 2009, the Convention and Visitor Bureau Board of Directors created two awards to recognize individuals who have impacted the San Marcos travel and tourism industry.

A.B. Rogers purchased 125 acres of land around the headwaters of the San Marcos River in 1926. His mission was to build a first-class resort with the river at the center for visitors to enjoy and appreciate the natural beauty. It was 90 years ago in April, Spring Lake opened featuring a luxury style hotel and golf course.

Later, in 1949, Paul Rogers rigged a paddle boat with a glass bottom and began to take family and friends out to see the bubbling springs, plants and animals that thrived in the clear waters of Spring Lake. This evolved into what is currently the glass bottom boat. He went on to develop “Aquarena Springs” theme park using glass bottom boats as its main attraction.

The Rogers Family Tourism awards will keep the memory of the Rogers Family’s contribution to the San Marcos Tourism Industry alive for generations to come.

This award is presented to an individual or organization in recognition of pioneering or groundbreaking efforts in developing tourism in San Marcos or dedication to and development of the San Marcos tourism industry.