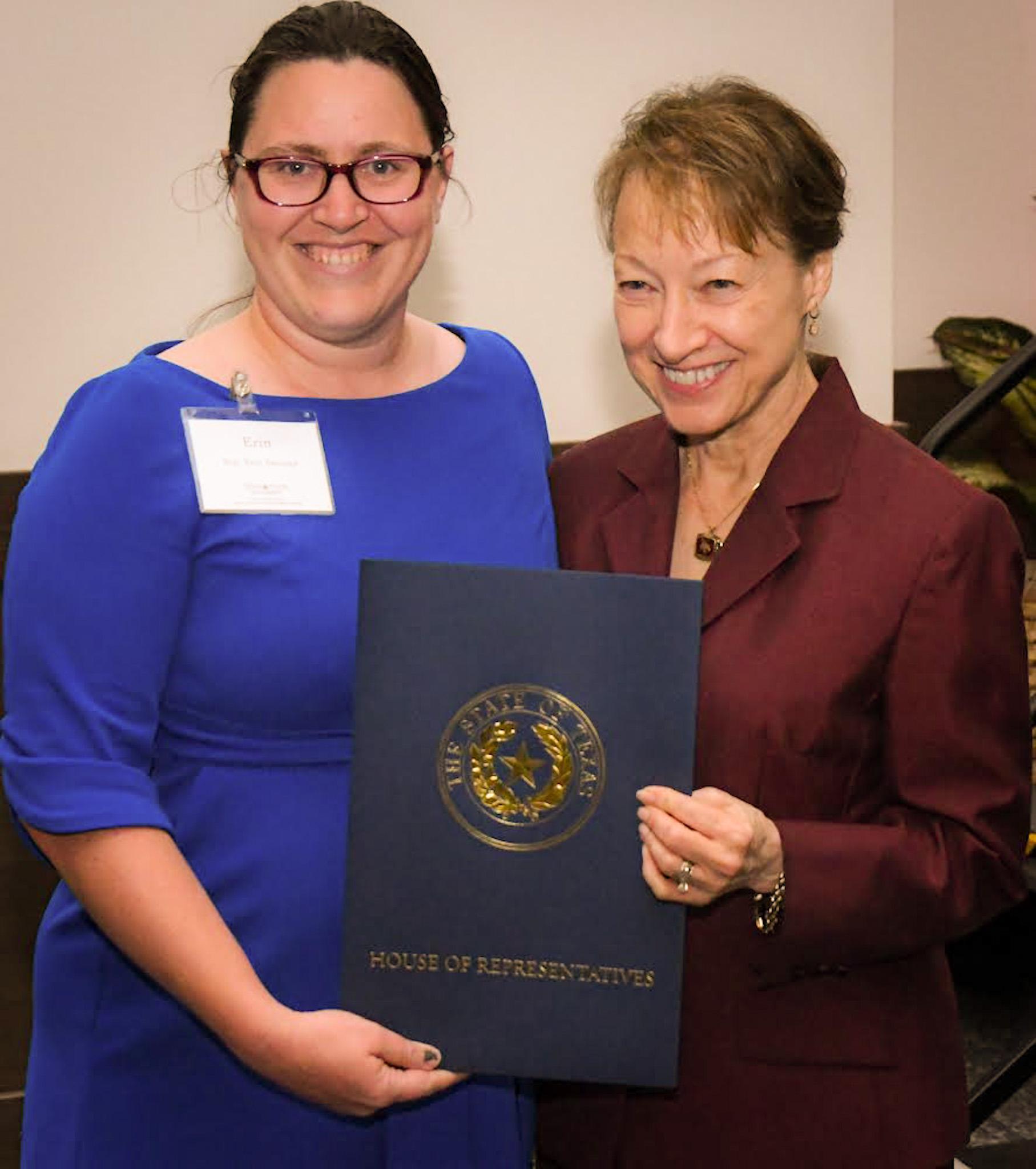 It was a retirement reception complete with friends, family and faculty gathered to celebrate Texas State University President Dr. Denise Trauth’s 20 years of leadership and service.

Dr. Trauth relieved her most notable accomplishment when read aloud by Bourgeois.

But it was when he said Trauth led Texas State to, “intentionally, and deliberately  [becoming a] Hispanic serving institution,” the crowd loudly applauded.

“Enrollment grew from 25,000 to 38,000 students. The university experience — as you’ve heard — it’s the largest construction program in its history, with $1.25 billion dollars at least worth of new major buildings,” Bourgeois said. “New athletic facilities included the Jerry and Linda Gregg’s west stadium addition, the north endzone complex, baseball and softball stadiums, and track and field and soccer facilities.”

Bourgeois also mentioned the creation of the 58-acre Science Technology and Advanced Research (STAR Park). He went on to mention McCoy Hall, the Performing Arts Center, Ingram Hall and, “a bunch of new residence halls under her tenure.”

“Don’t forget we opened the Round Rock Campus with the Avery building — the first building on that new campus, and the nursing building — and Willow Hall that followed,” he said. “A slew of other major renovation or expansion projects, including most notably the Student Recreation Center, Comal Hall, the LBJ Student Center and the University Events Center.”

During Trauth’s time as president, come May, 132,000 students will have graduated during her presidency, Bourgeois said. It will be her 256th commencement ceremony.

“The university’s two biggest capital campaigns in our history, including significant gifts from our Texas State Heroes, and many others who are here tonight,” Bourgeois said. “In fact, through that fundraising we now award more than six times the scholarship funds that we did in 2002. And the number of endowed scholarships is more than tripled.”

Bourgeois said under Dr. Trauth’s leadership the university has added about 80 degrees instead of certificate programs during her presence, including seven new doctoral programs and 30 new master’s degree programs.

“We’ve created the School of Nursing and the Ingram School of Engineering,” Bourgeois said.

Trauth later addressed the crowd thanking many for being in attendance.

“I want to thank Chancellor Brian Hall, who of course is chancellor over the Texas State University system. The leadership that he has provided has a profound impact on Texas state, on the schools in the system, but also on the whole state of Texas,” Trauth said. “Our system is more than a $1.5 billion annual enterprise and it spans about 50 square miles across the institutions if you put all the campuses together. Yet, in shepherding that giant enterprise, McCall appreciates and remains focused on the individual lives that are transformed through a quality education.”

The future of Texas State is incredibly bright, Trauth said, due in large part to the tremendous support it’s received from the Texas State University system, staff and from the Board of Regents.

“I extend my heartfelt gratitude to all of the current Regents in the former Regents for their many years of support,” Trauth said. “Support especially when our university presented new or sometimes difficult issues. Or when we wanted to take a big, giant step forward as Texas State evolved.”

Trauth said in many ways, being the president of an institution like Texas State isn’t a job. It’s a life.

“We’ve loved this life. It’s been rich in relationships, experiences and challenges,” she said. “When I call the people of Texas State, the bobcat family, I don’t say that lightly. Because this place is home and these people, you, are family.”