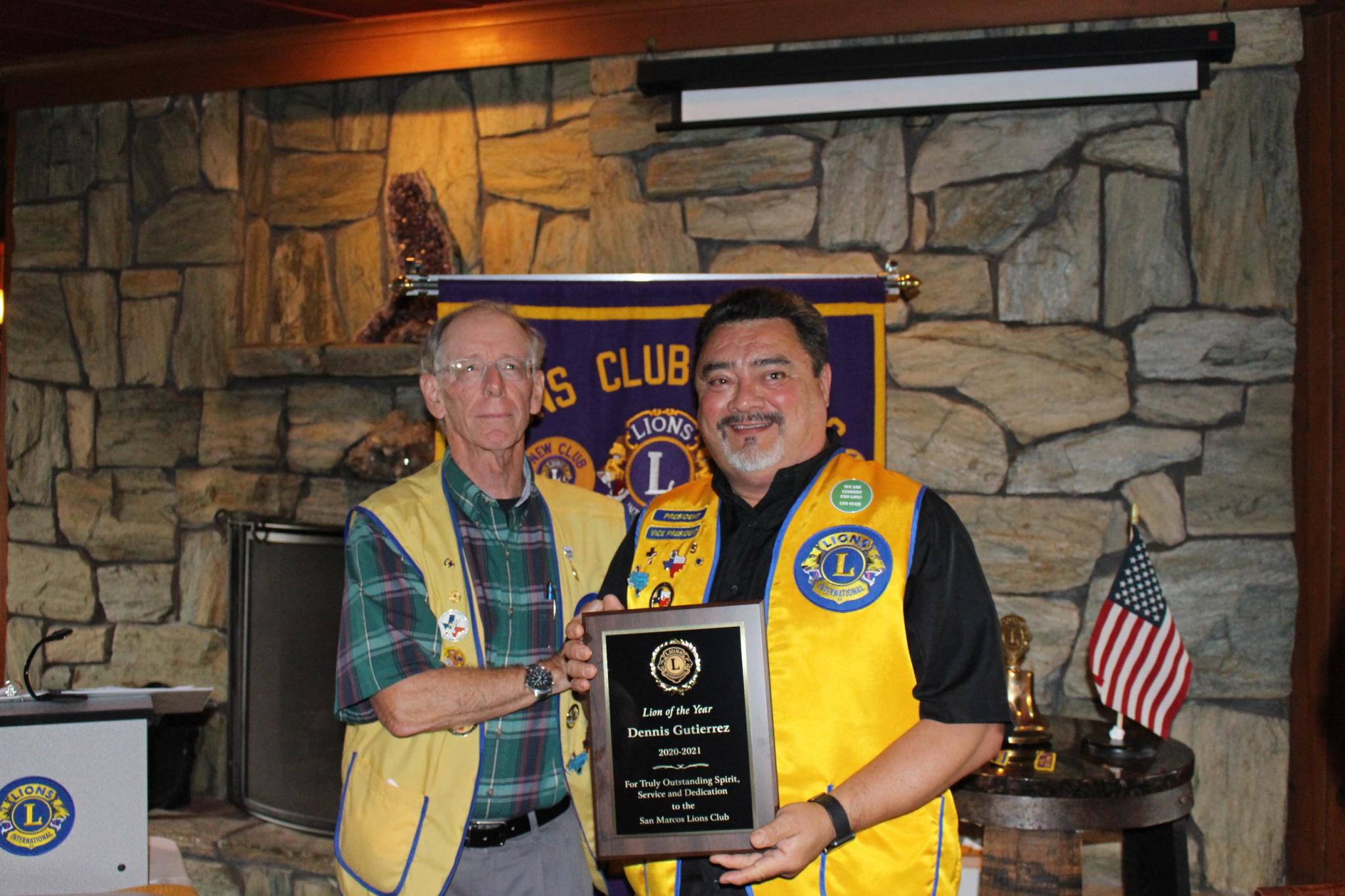 The San Marcos Lions Club met Wednesday to reflect on the year, give out worthy recognitions and install new officer. Above, John Bilodeau presents Dennis Gutierrez with Lion of the year. Photo courtesy of Nancy Smith

Stepping up during a shut down.

That’s one of many challenges the Lions Club of San Marcos met head on during a pandemic filled year. But on Wednesday night, it was a celebration as a contingent of club members gathered to reflect on the year, give out worthy recognitions and install new officers.

The Lion of the Year award was given to Dennis Gutierrez — the clubs president — for outstanding leadership during the COVID-19 restrictions. Gutierrez showed constant support to each Lion in the club, was project manager in all aspects of club business, special speaker at LEO Lion events, and assumed club leadership duties midway through 2020-21.

“I’ve had some great mentors and I'm looking forward to next year,” Gutierrez said. “I want to put last year behind us. We lost some veteran members, but we gained new members. We got young couples coming in … this is what we needed.”

Lions Clubs International was founded in Evansville, Ind. on Oct. 24, 1916. This International Association subsequently evolved as an international service organization under the guidance and supervision of its secretary, Melvin Jones.

The San Marcos Lions Club was chartered Nov. 12, 1941. In the almost 80 years of existence, only 36 Melvin Jones Fellowships have been awarded.

“Dr. Charles Johnson is a retired faculty member with 30 years teaching experience at Texas State University. He was department chair of the Health Services Research Department and the creator of the graduate program in Health Services Research. This was an innovative program focused on the measurement of healthcare quality indicators and outcomes,” Gutierrez said.  “Lion Charles joined Boy Scouts of America in the Late 80s. He’s earned several awards including the highest award in scouting, the Silver Beaver. He’s attended several national jamborees. He and his wife Linda’s proudest moments were watching their two sons earn the rank of Eagle Scout.” 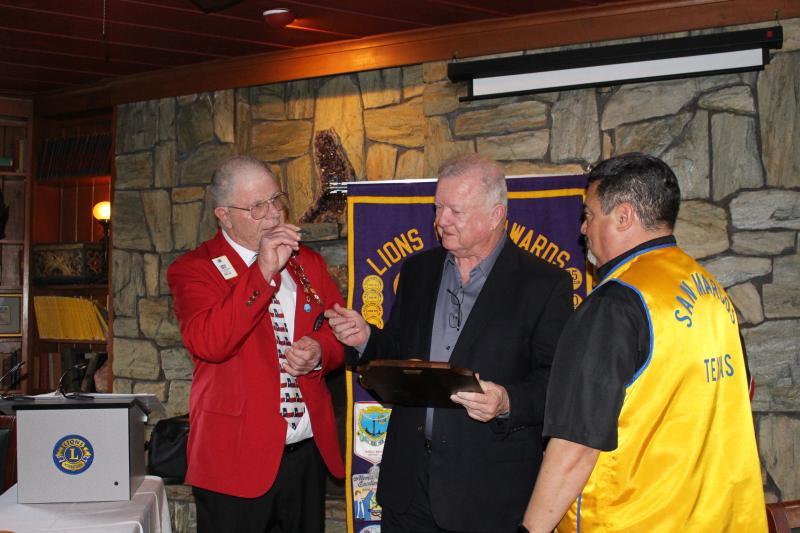 The Texas State Medical Explorer Post 4077 was created in 1991. The idea was that college students could benefit from the successful career awareness Boy Scout program of exploring and at the same time, focus on the skills important to beginning health professionals. Hundreds of students benefited from the enormous opportunities and went on to become medical professionals earning medical degrees in a variety of fields such as: Internal medicine, pediatric oncology, general surgeons, epidemiology, radiology, dentistry, nursing, research and Peace Corps volunteers.

“Dr. Johnson has many years of experience in community service through the Kiwanis Club. He has held several positions within the club up through president; and has served a term as Kiwanis Lt. Governor for Central Texas,” Gutierrez added. “Dr. Johnson joined the San Marcos Lions Club in 2018. His vision was to take the Medical Explorers to a new level. With the assistance of several leaders in our district, he was instrumental in chartering the first Omega Leo Lions Club in Texas specializing in Medicine. On March 5, 2020, the Texas State University Medical Explorers Omega Leo Lions Club was formed.”

On July 1, Dr. Johnson will lead the district as the District Alert Chair controlling over $30,000 dollars in District Charitable funds available for disaster relief.

Lions Clubs International recognizes outstanding individuals by bestowing on them an award that is named for its founder, Melvin Jones. This Fellowship Award is the highest form of recognition and embodies humanitarian ideas consistent with the nature and purpose of Lionism. 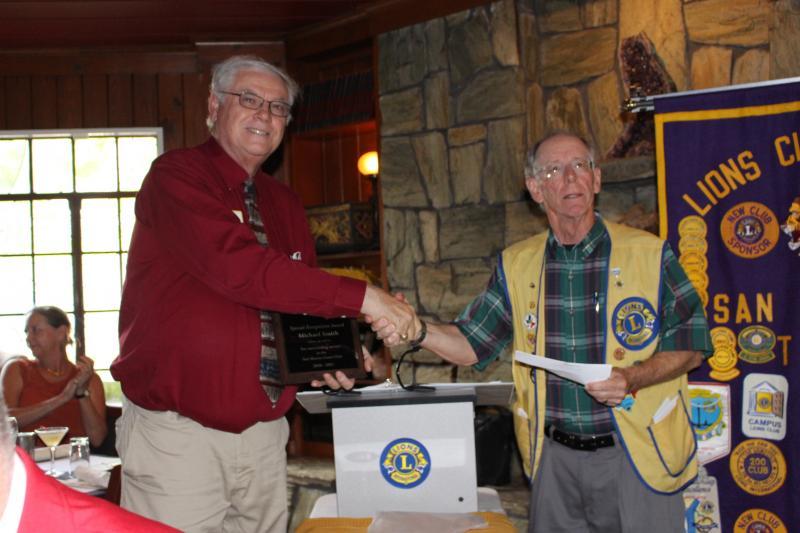 Other recognitions included a new – ‘You Are Awesome’ award.

Those receiving awards were: 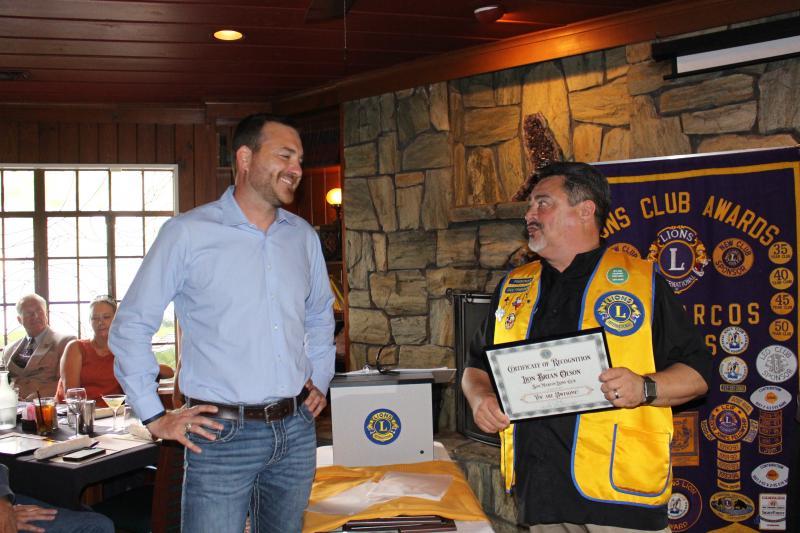 Above, Olson receives a Lions Club You Are Awesome award. Photo courtesy of Nancy Smith

John Bilodeau — Service to the community outside the umbrella of Lions, service in mission work, special committee assignments, awards committee. 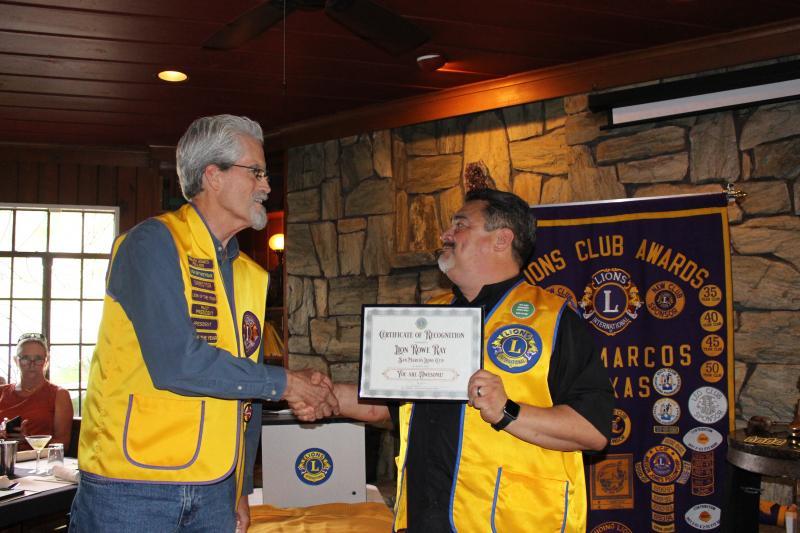 Jason Clouse — continuous assistance with Food Bank Distribution efforts, service to the community outside the guidelines of Lions Club.