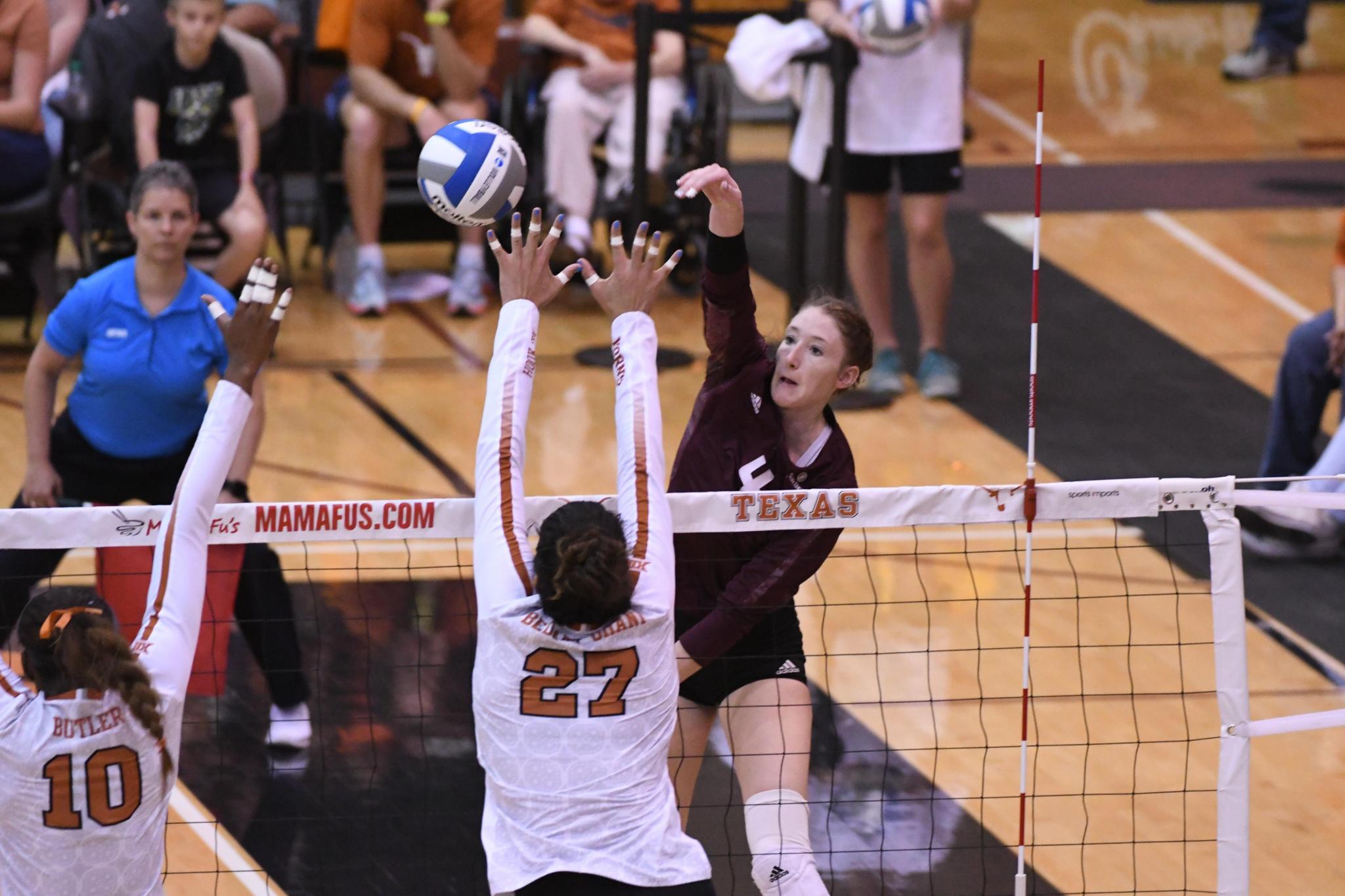 Bobcats’ historic season ends in loss to No. 5 Texas

AUSTIN — When Texas State’s Karen Chisum and Texas’ Jerritt Elliott embraced after the Longhorns beat the Bobcats on Sept. 6, Elliott made it clear that he expected to see Chisum’s team again.

And on Friday there stood Texas State.

The Bobcats, who were making their first appearance in second round of the NCAA tournament, met No. 5 Texas inside Gregory Gym on Friday in front of a raucous crowd of 3,243 mixed in burnt orange and maroon and gold.

“For me to say we’re not disappointed that would be incorrect,” Chisum said. “Disappointed but realistic. I cannot take anything from this group of young ladies that have been at Texas State this year and what they’ve done for this program, what they’ve done for Bobcat nation. We played hard all season long. They’ve earned everything they’ve gotten.”

What was it about the Bobcats that Texas’ head coach saw? Elliott saw a team capable of taking down the Longhorns.

“I know (Texas State’s) coaching staff does a nice job,” Elliott said. “They have some special talent. They have some good pieces. I thought Amy (Plughaupt) is really good. She hurt us the first time we played. Obviously, there’s (Cheyenne) Huskey and then Madison (Daigle) is a very proficient middle blocker. I felt like they had all the pieces to be successful.”

The Bobcats called a quick timeout after Texas held an 8-2 lead and then used their final timeout with the Longhorns up 16-7.

“I thought we’d come out a lot looser,” Chisum said. “Unfortunately, they got those first three or four points … I don’t have an answer for that. I don’t think they do either. I know they’re disappointed in their performance.”

Texas State kept things close in the second set. The Bobcats prevented Texas from getting a lead larger than three points. Texas State was within 15-12 but a timeout on the floor killed the Bobcats’ momentum.

Texas came out of the break and began to pull away from Texas State. The Longhorns claimed a 2-0 match advantage with a 25-17 second-set victory.

Texas held control of the third set. After the Bobcats cut the deficit to 6-4, the Longhorns seized momentum and went on a 10-0 run.

“It’s difficult to lose the way we did because we didn’t play our game to our full potential,” senior outside hitter Amy Pflughaupt said. “We never gave up … It’s a tough loss. It’s good to know that Texas is that good and we lost to really good team. But knowing that we could’ve performed a lot better and even possibly taken them to five even possibly to win, it’s just difficult.”

Texas State struggled to get into a rhythm on Friday. Junior outside hitter/setter Cheyenne Huskey, who recorded a career-high 23 kills on Thursday against Rice, was held to six kills. Pflughaupt tallied five kills, while senior middle blocker Madison Daigle had four. Freshman outside hitter Janell Fitzgerald led the team with seven kills.

Although Texas State’s season came to an end, the Bobcats recognize the history they made this season.

“We brought this program to a new level,” Daigle said. “I want them to continue to go further in the future and know that it started with us and we set the standard for the teams in the future.”