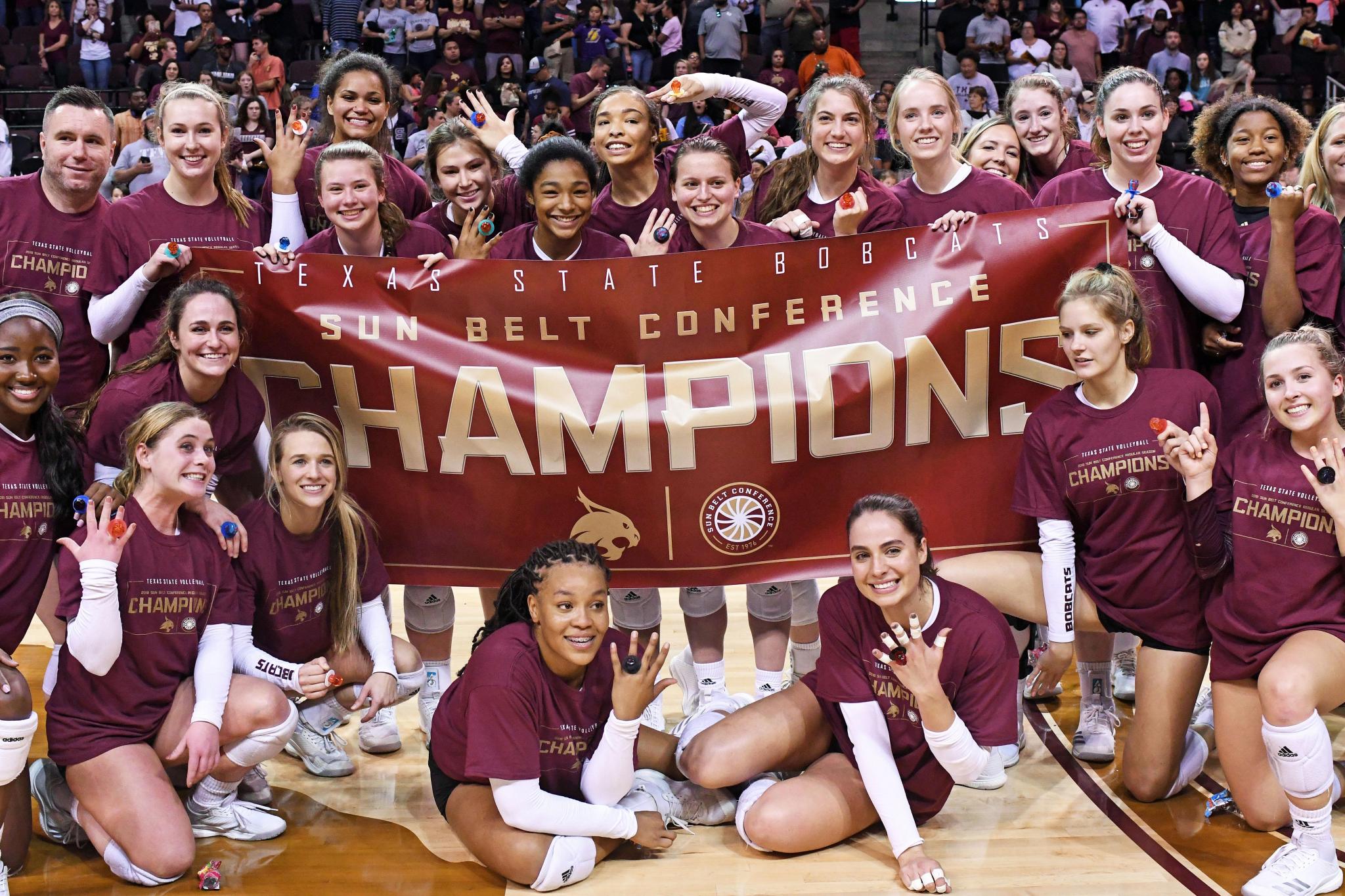 The Bobcats have been chasing rings all season.

They finally got those rings following a 3-0 sweep (25-10, 25-23, 25-14) over Louisiana-Monroe on Sunday, which clinched at least a share of the Sun Belt regular-season championship for the Bobcats and the No. 1 seed in the upcoming conference tournament.

Donning championship T-shirts, Texas State showcased a conference-title banner and its rings. These rings, however, didn’t shine. No, some were red. Others green. Others blue. They were Ring Pops.

Yes, these rings, were just candy, but they ultimately represented the journey the Bobcats took to claim their first ever Sun Belt regular-season crown.

“Our coaches got us together and were like, ‘We don’t have any rings right now or any real jewelry, so let’s just see if we can get some Ring Pops for y’all,’” said senior middle blocker Halee Brewer, who tallied a match-high 11 kills, “and we were like, ‘That’s alright. We love candy,’ and it’s exactly what we want it to be. And look, if (the actual ring) is this big, it’s even better.”

“(Winning the conference championship is) what we we’ve been preparing this whole season and preseason and regular season, but it’s awesome,” senior outside hitter Amy Pflughaupt said. “It’s kind of cool that it’s senior night and we get to win a ring at the same time so it’s really cool. It’s an honor.”

The Bobcats made a special addition to their starting lineup for senior day. Senior outside hitter Megan Porter, who suffered a season-ending ACL injury early in the 2018 campaign, started and played until the opening set was tied 1-1.

After a 2-2 tie, Texas State started to roll. The Bobcats roared their way to 25-10 first-set victory.

ULM gave Texas State all it could handle in the second set. The Warhawks held their largest lead of the frame at 15-11. But the Bobcats fought their way back and tied it at 22-22. Texas State closed the set out with a 25-23 win to seize a 2-0 match-advantage.

The Bobcats won the opening point in the third set and never looked back. Texas State won the final period with ease. Senior middle blocker Madison Daigle ended the match with a kill then the celebratory dogpile ensued.

“I’ve been looking forward to this for four years now,” said Daigle, who ended the day with nine kills and three blocks. “Working hard all season and offseason. It means more to me than I can ever imagine. It’s been a ride. It’s been a journey.”

Texas State still has three games left in the regular season. The Bobcats travel to take on Arkansas State on Friday at 6:30 p.m.

Texas State doesn’t plan on looking past its upcoming opponents, but the Bobcats have their sights set on bigger goals.

They want to earn more than just Ring Pops.

“It’s not over,” Brewer said. “We still have a conference tournament. We still have to play three more games in the regular season, and who doesn’t want to finish with no more losses? We want to finish that. And at the end of the day, that big ring, the conference (tournament) championship to win that and go to the NCAA tournament that’s what we’re looking for. Like, this is great. Love it. But we want to go on and let’s go ahead and go to the NCAA tournament and let’s beat some of them too. That’s what I want to do.”