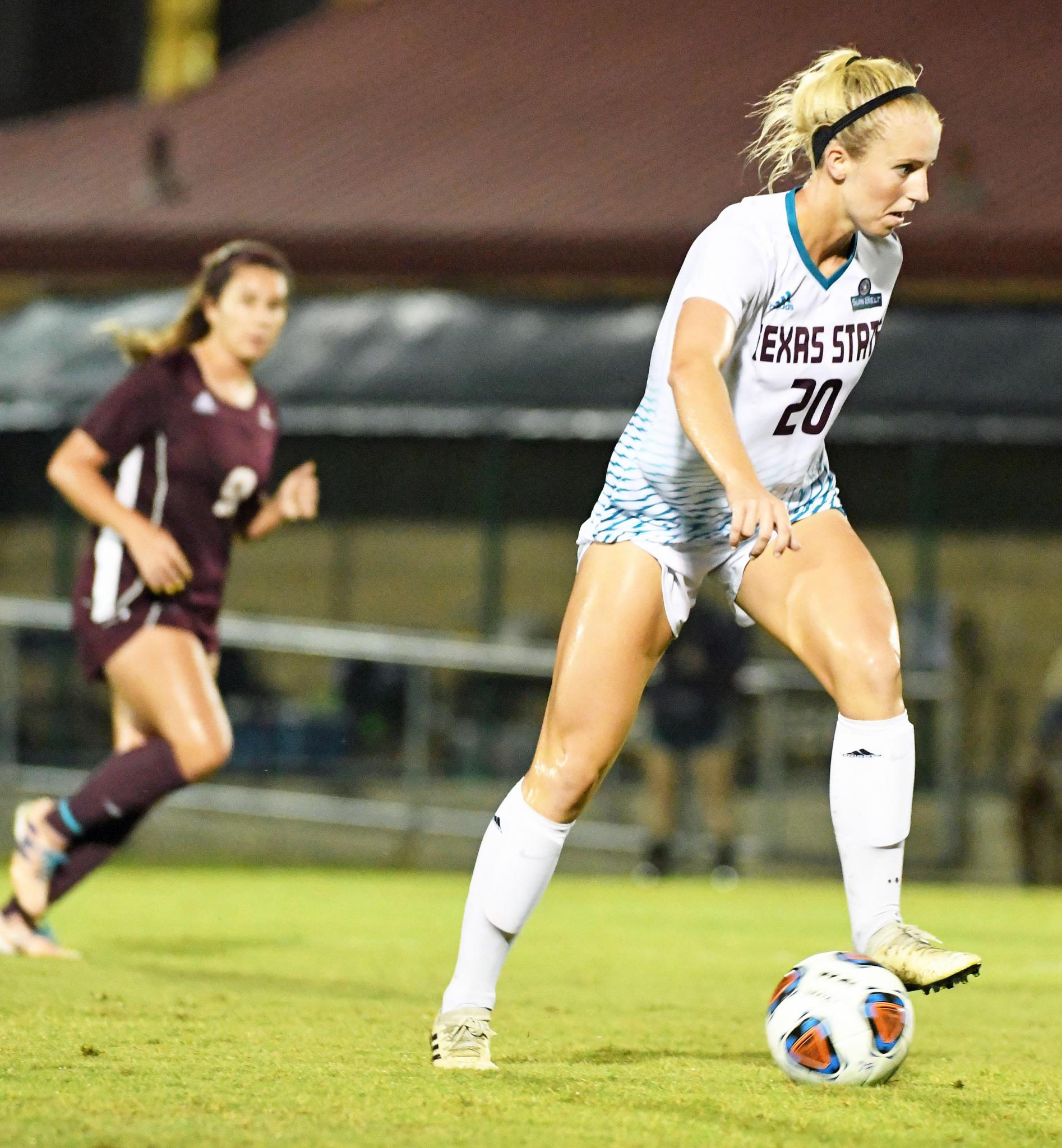 Texas State rallied from a 1-0 deficit to defeat Louisiana-Lafayette, 2-1, in double overtime inside the Ragin’ Cajun Soccer/Track Complex in Lafayette, La.

The Bobcats earned the victory after freshman midfielder Ally Kewish placed a low shot that Louisiana’s keeper couldn’t stop. Kewish’s golden goal pushed the Bobcats record to 4-5-0, and they are now 2-0-0 in Sun Belt play. The Ragin’ Cajuns fall to 1-7-2, 0-2-0 after the loss.

Junior forward Kaylee Davis started the match strong by putting up a shot just 15 seconds into the match. But her attempt was blocked.

Senior midfielder/defender Kelly Barbalias put up a long shot from 25 yards out in the seventh minute but it didn’t find the back of the net.

Texas State took three more shots in the first half, but the Bobcats couldn’t get on the scoreboard.

Louisiana had an opportunity to take a lead when a mistake allowed an open-goal situation for the Ragin’ Cajuns. But the Bobcats kept Louisiana from taking a shot.

Davis had an opportunity in the 56th minute. She sent a chip shot toward goal but Ragin’ Cajun sophomore goalkeeper Victoria Ryan made a diving stop.

Louisiana took a 1-0 lead when freshman midfielder Madysin Girouard sent a shot past Martin in the 69th minute.

Texas State equalized in the 79th minute when sophomore midfielder Mackenzie Smith sent a pass to junior defender Genesis Turman, whose shot hit the crossbar and bounced back into play. Davis got her head on the rebound and sent it into the back of the net to even the score at 1-1.

Neither team was able to end the game in regulation. Louisiana had the best opportunity to end the match in the first overtime period in the 99th minute. A Ragin’ Cajun corner kick created danger for Texas State. Louisiana freshman forward Kacie Pou headed a ball off the corner but it went right of goal.

The Bobcats ended the match in the second overtime in the 108th minute. Barbalias sent a good ball to Kewish, who placed her low shot beyond the keeper’s hands.

Davis led the Bobcats with a match-high six shots. Junior midfielder Jordan Kondikoff was the only other Texas State player to take multiple shots with two. Martin ended the match with five saves and is 4-2-0 when in goal. Friday’s win marks Martin’s 18th career win as the keeper and moved her into a tie for fifth all-time in Bobcat history with Natalie Gardini.