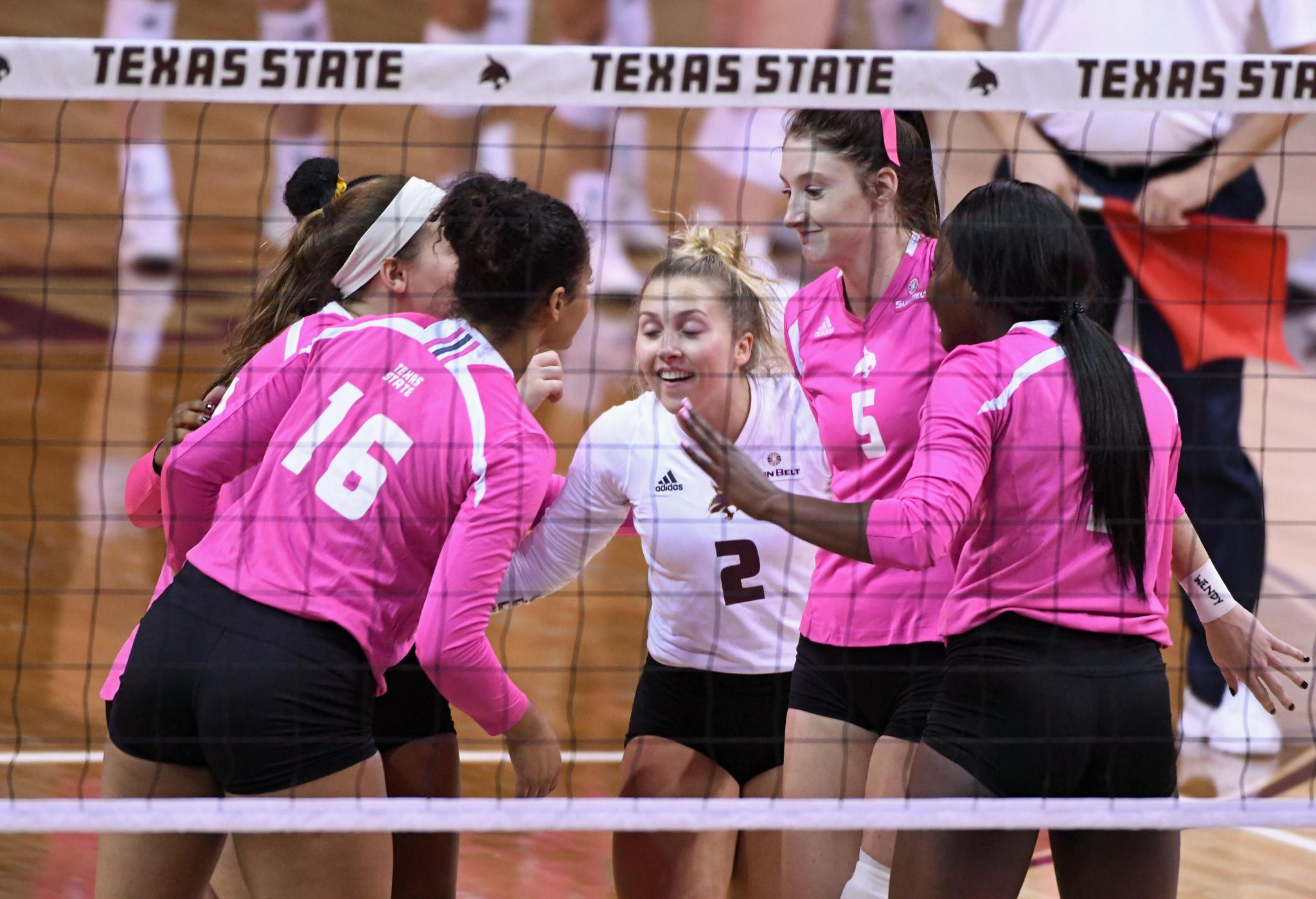 Standing inside the hallway just off the court after two sets, Texas State head coach Karen Chisum wanted to make her message clear — The Bobcats needed to play their game.

She also wanted her team to understand they needed to win three sets to take the match. “I was just trying to instill some confidence,” Chisum said after UT Arlington claimed the first two sets against the Bobcats in Tuesday’s contest inside Strahan Arena.

“We came out very timid, just not us,” freshman setter Emily DeWalt said. “We came out after the second set and went into the tunnel and we knew it was now or never. This game wasn’t going to take our (Sun Belt championship) ring away from us. So, we came out with relentless pursuit, and we came out and were able to pull it off.”

What fueled the Bobcat comeback? Freshman outside hitter Sarabi Worsley-Gilbert says it was Chisum’s speech in between the second and third sets.

The Bobcats hit a lowly .100 hitting percentage. They committed four attacking errors and two service errors. They dropped the opening set 25-20 — the first time they lost a first set since Sept. 6 against No. 4 Texas.

Texas State improved its hitting percentage to .200 in the second set. But the Bobcats committed three service errors in the frame. The Mavericks claimed the second set, 25-22, to take a commanding 2-0 match advantage.

But fueled by Chisum’s message, the Bobcats seized momentum in the third set. Texas State kept the match alive with a 25-10 win in the third period.

The Bobcats, however, struggled early in the fourth frame. After Texas State took an early 3-1 lead in the set, UTA went on an 8-1 run to claim a 9-4 advantage.

“(The third set) definitely brought momentum into the game,” DeWalt said. “I mean, we came out in the fourth set, actually flat again. And we just said, ‘What? We just did it in the third, why can’t we come out again and do it?’”

The Bobcats answered with a 7-2 run to even the score at 11-11. The set was tied three more times before Texas State pulled away. The Bobcats forced a decisive fifth set with a 25-21 fourth-set victory.

The fifth frame was tight early, but Texas State fought its way to a 15-8 win to remain undefeated in Sun Belt play.

“I think it’s going to give us a lot of confidence,” Worsley-Gilbert said. “I think our next few teams are going to be a little bit tougher but I think we’ve got it.”

Chisum called Worsley-Gilbert the hero of the match after she led the Bobcats with 18 kills.

“Before coach Chisum put me in, she told me to step up because I needed to,” Worsley-Gilbert said. “I don’t know, when coach Chisum looks me in the eye and tells me something, I really take it to heart.”

After a thrilling comeback victory, the Bobcats believe the win will help boost their confidence going forward.

“We’ve just got to look at every match at a time,” Chisum said. “These kids are focused, I will say that. We’re focused on what we’ve got to do. But what I’m blessed for is having a bench and having substitutes when somebody struggles. It’s a team effort.”

Up Next: Texas State continues Sun Belt play against Georgia Southern (7-10, 2-1) on Friday at 5:30 p.m. at Hanner Fieldhouse in Statesboro, Ga.