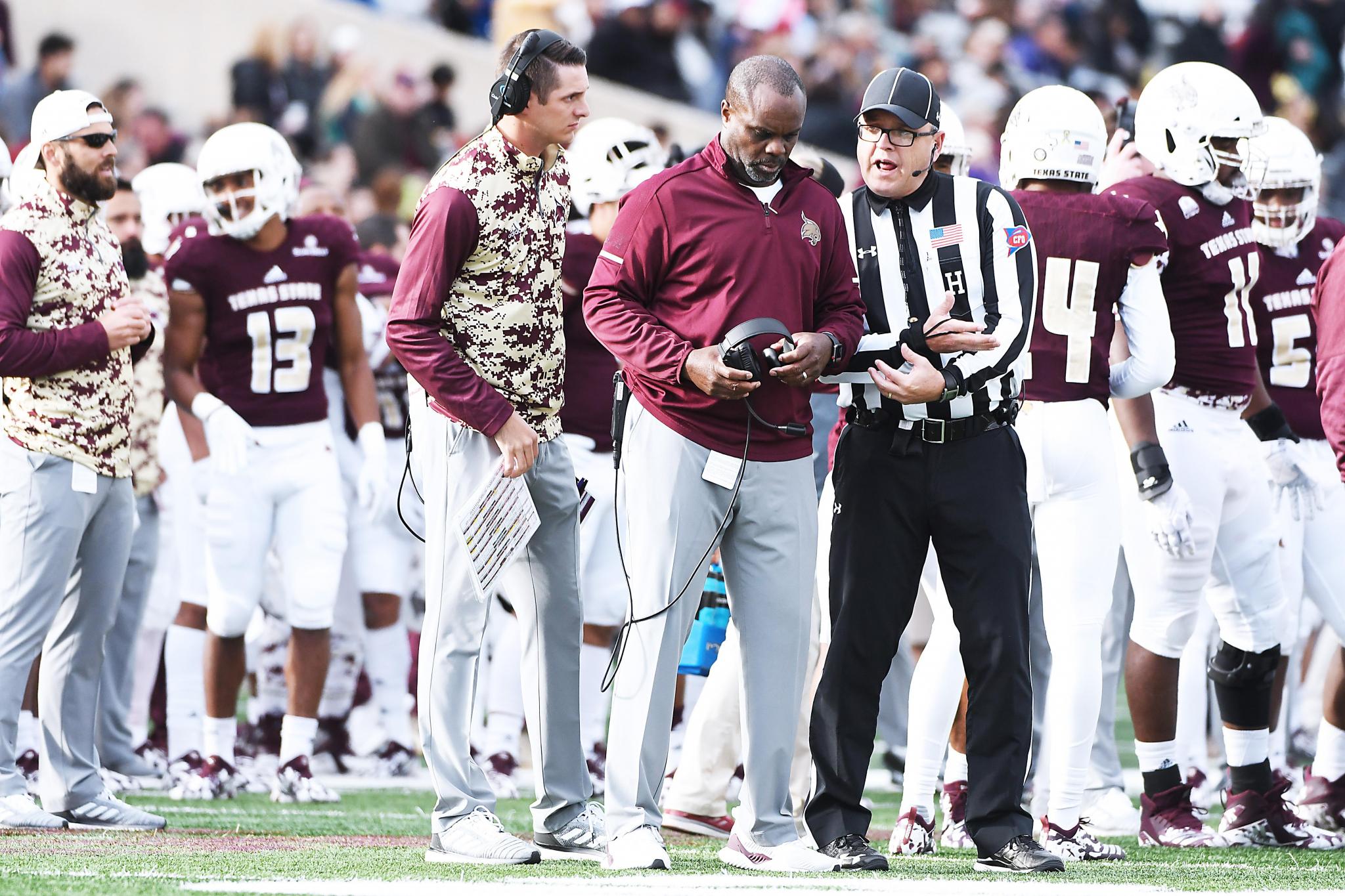 Bobcats reflect on Withers, look ahead to season finale

A.J. Krawczyk says it would take him a couple days to express how he feels about Everett Withers.

The senior safety along with his teammates found out about Withers’ dismissal as Texas State’s head coach on Sunday. Krawczyk says everyone was upset about the news.

“We loved (Withers),” Krawczyk said. “He’s been a mentor to us. Ever since he’s gotten here, he’s fought for us. He’s swung left and right for us. I mean, I’ll go down with that man. That man is literally why I’m on scholarship, is because of that man … I could never thank him enough for that.”

Withers was fired a game short of completing his third season in San Marcos, where he posted a 7-28 overall record and went 2-21 in Sun Belt play.

“It’s always a tough thing,” Woods said. “This is the life that we have chosen as we say, and it is a big boy’s business and we understand, while not maybe necessarily agreeing all the time, but we do understand that it’s a wins and losses business at the end of the day. And certainly other things are important but we all recognize that the results were not what any of us wanted.”

Woods will be responsible for coaching Texas State through the final game of the year. He doesn’t expect to make any changes as the interim head coach.

“I’m not going to jump in there and be responsible for everything,” Woods said. “You know, my job now is to kind of oversee the program and add my input where I think it’s important and maybe makes some change in things that I feel very strongly about. But the staff is still the staff and the staff is going to work on their appropriate side of the football.”

As the Bobcats prepare for the season finale, Woods believes the Bobcats aren’t far away from finding success.

“I don’t feel like we’re a million miles away as far and I think the results bare that out,” Woods said. “(The results are) not what any of us would’ve wanted but I’ve been through this a couple times. I’ve said all along that I’m the beneficiary of coming in kind of on the back end of a lot of dirty work that was done the first couple of years.

When asked what Woods learned the most from Withers, he said he appreciated the former head coach’s consistency and his ability to help his players off the field.

“The thing that I appreciated about and continue to appreciate about coach Withers is he was a tough man,” Woods said. “He was a tough man. He was a fair man. But he was consistent and I think that’s what players crave more than anything is to be yourself and be consistent and they may not like but if they know exactly where the line is and how it’s going to be everyday, which there was never any question with coach what the standards where and what was expected of you.”

“Before coach Withers got here, that last year before he was here, there was no team bond,” Krawczyk said. “There was no, I had people I came in with, how many are left? There’s four of us that came in that class. Ever since he got here the bonds between those people who have stayed and stuck through it all some of these guys are going to be in my wedding, some of these guys are my best friends and I know all of these guys would take a bullet for me as I take a bullet for them. I’m just blessed to be a part of that. I’m blessed for coach Withers to give us that opportunity.”