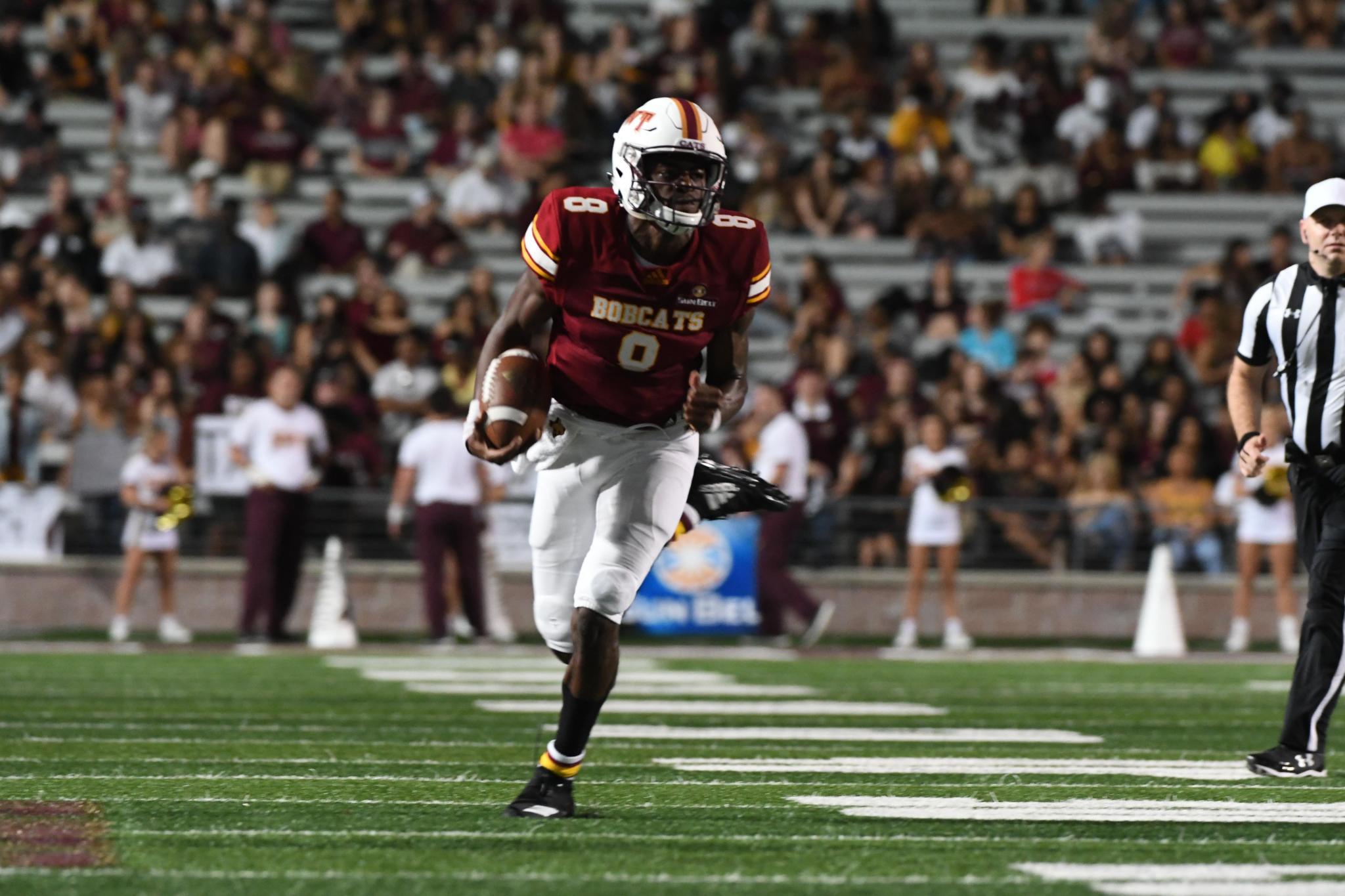 With the ball floating into the endzone, Texas State's JaShon Waddy broke up New Mexico State’s last gasp on 4th and 5 late in Saturday’s game.

The junior safety’s pass break up secured the Bobcats a 27-20 win over the Aggies on Homecoming, where the Bobcats honored Southwest Texas State with throwback uniforms, inside Bobcat Stadium.

Texas State (2-6, 0-4 Sun Belt) faced adversity before Saturday’s win over NMSU (2-7). Freshman quarterback Tyler Vitt, who had started the previous three games, was ruled out with a shoulder injury.

Sophomore quarterback Willie Jones III, who started the first four games of the 2018 campaign, came up big in Vitt’s absence. Jones did his work mostly on the ground with 110 yards and a touchdown on 19 carries. He also threw two touchdown passes and completed 50 percent of his passes for 113 yards.

Withers said Jones had a strong week of preparation leading up to his performance Saturday.

“Coach (Brett) Elliott and the rest of the offensive staff did a job of, I mean, the gameplan was simple,” Jones said. “I mean, we were able to go fast and keep it simple and fast.”

Texas State did just that. After the defense got of the field quickly on New Mexico State’s opening drive, junior wide receiver Hutch White gave the Bobcats prime field position with a 45-yard punt return.

Texas State took advantage of starting in Aggie territory with a 19-yard touchdown run by Jones.

Midway through the opening quarter, junior linebacker Clifton Lewis Jr. came up with his first collegiate interception and returned it 23 yards to the New Mexico State 32.

“(The interception) felt good because we made a good call,” Lewis said. “The quarterback didn’t see me. I just jumped in front of the pass.”

Texas State used the turnover to add to its lead with 3-yard run by junior running back Anthony D. Taylor.

But New Mexico State stormed back with 13 straight points. The Aggies cut the Bobcat advantage down to 13-3 with a 21-yard field goal by senior kicker Parker Davidson. NMSU made it a one possession game with a 5-yard touchdown run by junior running back Jason Huntley. The Aggies evened the score with a 25-yard field goal by Davidson.

But a late 18-yard touchdown pass from Jones to freshman wide receiver Javen Banks to give Texas State a 20-13 lead at the half.

The Bobcats opened the second half with a seven-play, 75-yard drive capped off by a 39-yard strike from Jones to sophomore wide receiver Jeremiah Haydel to give Texas State a 27-13 advantage.

But NMSU capitalized off a Jones fumble, which was returned 34 yard by redshirt junior linebacker Shane Jackson for a touchdown to cut the Bobcat lead down to 27-20.

Texas State’s defense held strong throughout the rest of the half to secure the win and snap a six-game losing streak.

“That was a good win,” Lewis said. “We needed that win to carry on for the rest of the season. (We’ll) just come back (Sunday) ready to work to get this feeling again.”

Texas State ended the night with 230 rushing yards and touchdowns. Jones led the way on the ground followed by sophomore running back Robert Brown Jr.’s 95 yards on 17 carries.

With its first win since Sept. 8, Texas State looks to build momentum as it heads into a difficult November Sun Belt slate. The Bobcats travel to Atlanta to take on Georgia State on Nov. 3 at 1 p.m.

“We could use and obviously you like to be able to coach and teach when you win,” Withers said. “It’s easier, it’s easier to coach hard when you win. So, I’m hoping we’ll be able to do that starting next week, and be able to give us a chance when we go play Georgia State.”