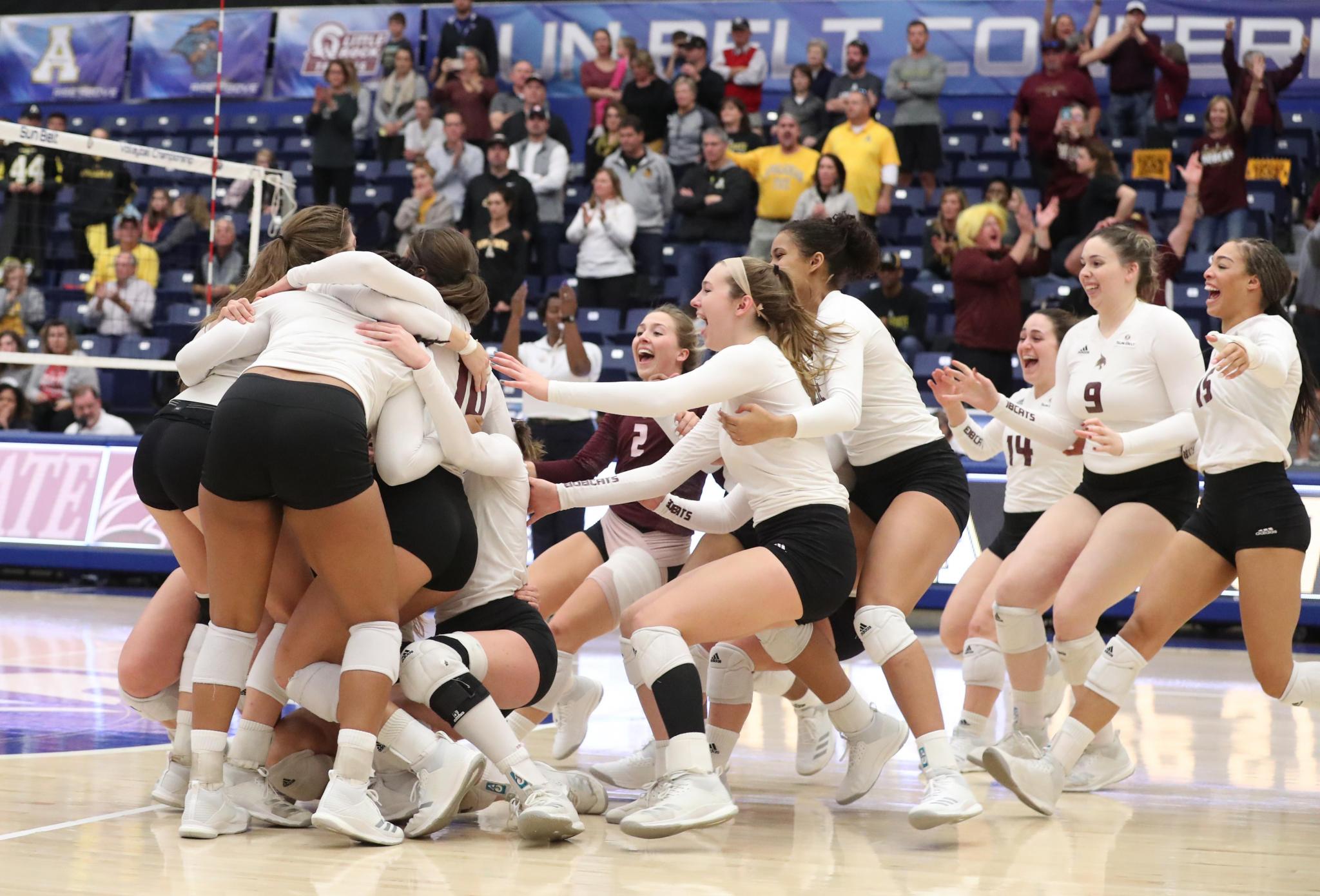 The Bobcats were chasing rings. Fueled by a heartbreaking 3-1 loss to Coastal Carolina in the 2017 Sun Belt tournament championship game, Texas State dominated the conference in 2018.

“I’m so excited for this group of Bobcats and the fans in San Marvelous,” head coach Karen Chisum said in a postgame press conference. “... Again, these guys started it when the freshmen came in July the 9th and they started talking about the ring. They talked about it a lot.

“We were in the (conference tournament) finals last year. We lost to Coastal (Carolina). One of our other players during the summer kept bringing up the video when Coastal celebrated and about their rings and they said that’ll never happen to them again while they’re here. So, I think that was indicative of the mission that they were on.”

The Bobcats carried their momentum into the third set. Texas State saw itself with a 5-4 lead early in the final frame and used a 7-1 run to take a commanding 12-5 lead. App State fought back to within 18-14. But Texas State closed out the set to win the Sun Belt championship.

“I’ve literally been working for this since I’ve gotten here and we’ve fallen short every single year,” said Daigle, who finished with a match-high 12 kills. “You know, last year against Coastal, like (Chisum) said, it hurt coming in second, defeating them beginning of the year and then they beating us. It really lit fire under our butts to work hard all spring and all summer and that’s what we did. We knew that people were coming out for us because of how good were and we had a mission all season and that’s what we did.”

Daigle was named the tournament’s Most Outstanding Player after Sunday’s match. She’s the first Bobcat since Caylin Mahoney in 2013 to receive the honor. Daigle said it’s really special for her to receive the award.

“Working hard, all of that’s paid off definitely,” Daigle said. “Getting this, this feeling, nothing can beat this. I’m just so happy that I got to experience it with this team and these coaches and bring it back home to San Marcos.”

With the win, Texas State receives the Sun Belt’s automatic bid into the NCAA tournament. This will be the Bobcats’ first appearance in the tournament since 2013 and 10th overall appearance in program history.

Texas State will wait to see where it’s headed for postseason play with the NCAA Selection Show set for Nov. 25 at 7:30 p.m. on ESPNU. Chisum is looking forward to taking the Bobcats back to the big dance.

“Because it’s been five years, maybe four or five years since we’ve been there, this group, none of them have been so I’m really, really excited for them and my staff,” Chisum said. “... But to take this group for the first time, I don’t care where we go whether it’s Austin, Portland, Oregon, Anchorage, Alaska, we’re going to take some fans with us but we’re going to take the best possible team and effort that we possibly can.”