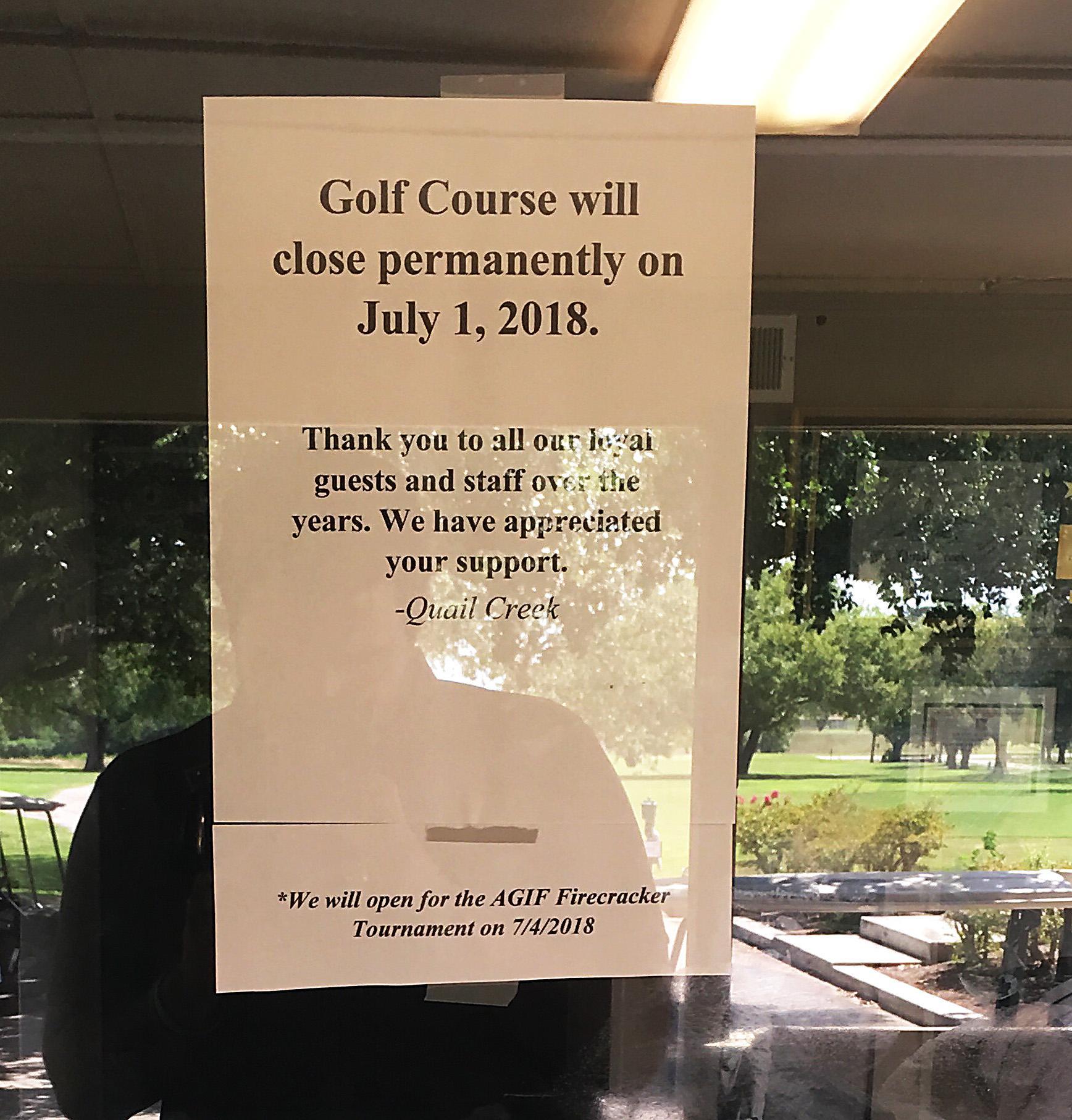 Clayton began playing at the course when he was 10. He was a member of what was then a semi-private golf club. He worked there when he attend San Marcos High School — First in the cart barn and then in the pro shop.

He remembers Quail Creek as a thriving golf course.

But Monday a sign was placed on the pro shop door announcing the closing of the golf club. On July 1 — Sunday — Quail Creek Golf Club will cease operations. The sign said “Thank you to all our loyal guests and staff over the years. We have appreciated your support.”

Quail Creek was built in 1967 and opened in the 70s as a 9-hole course, but was made into an 18-hole course. Reasons behind the closing were not given. The Daily Record left a message for Quail Creek’s management, but they did not respond.

There was no advance notice before Monday’s announcement, said Bobby Rodriguez, who works at the course. Rodriguez called the closing a sad day for San Marcos.

“It’s sad because it’s one of the things that we had left that in the city,” said Rodriguez, who’s a member of San Marcos’ Pan-American Golf Association chapter. “The guys and the families used to go there. It’s sad. We’ll see what comes out of it.”

“San Marcos CISD is very fortunate to have endless support from our local businesses and organizations,” said Mel Callender, San Marcos’ head golf coach, in an email. “Quail Creek has been a huge supporter of our district, our golf program and our students. The golf club will be missed and we thank them for their years of service to this community.”

Clayton echoed Rodriguez’s sadness about the closing. Clayton said Quail Creek used to be the center of many things going on in the city.

“Like I said earlier, it was a thriving place,” Clayton said. “You would see many, many people from the community out there whether they were out there to eat at the restaurant or at the swimming pool or out there to play golf. They always had stuff out there in the summer. They had a great 4th of July golf tournament. They had a Super Bowl scramble tournament. Growing up they had a day-night golf tournament, which was really fun … There were many generations of people who went through that place. It is very sad but the course kind of went to the wayside the last couple of years.”

The course will open one more time after Sunday’s closing. The American GI Forum of Texas’ San Marcos Chapter will host its 18th annual Firecracker Golf Tournament Classic on Wednesday.

“The golf course started getting a reputation outside of (San Marcos) about the conditions of the golf course itself,” Sanchez said. “I’ve never been one of those to criticize a particular golf course because I’ve always grew up in a golf course where you just play the game and don’t worry about the conditions … But all of that has to do with management and whatever finances are available to put back more into the course. It’s like maintaining your home correct. If you want to keep your yard nice, you’ve got to put in the labor.”

Sanchez said he isn’t sure if the annual Firecracker tournament will continue after Quail Creek’s closing.

Clayton has high hopes for Kissing Tree’s golf course, but it won’t replace the memories made at Quail Creek.

“Those of us who grew up playing at Quail Creek, we had a really tight-knit group of guys that were even when I was in eighth grade we would play with those who were seniors and juniors in high school, so, I mean, there was a gap of six-to-eight years of young guys who all knew each other and played together and still to this day keep in touch with one another," Clayton said. "So, I mean, it was a very influential place for many of the youth … It just kind of raised a bunch of us local boys.”