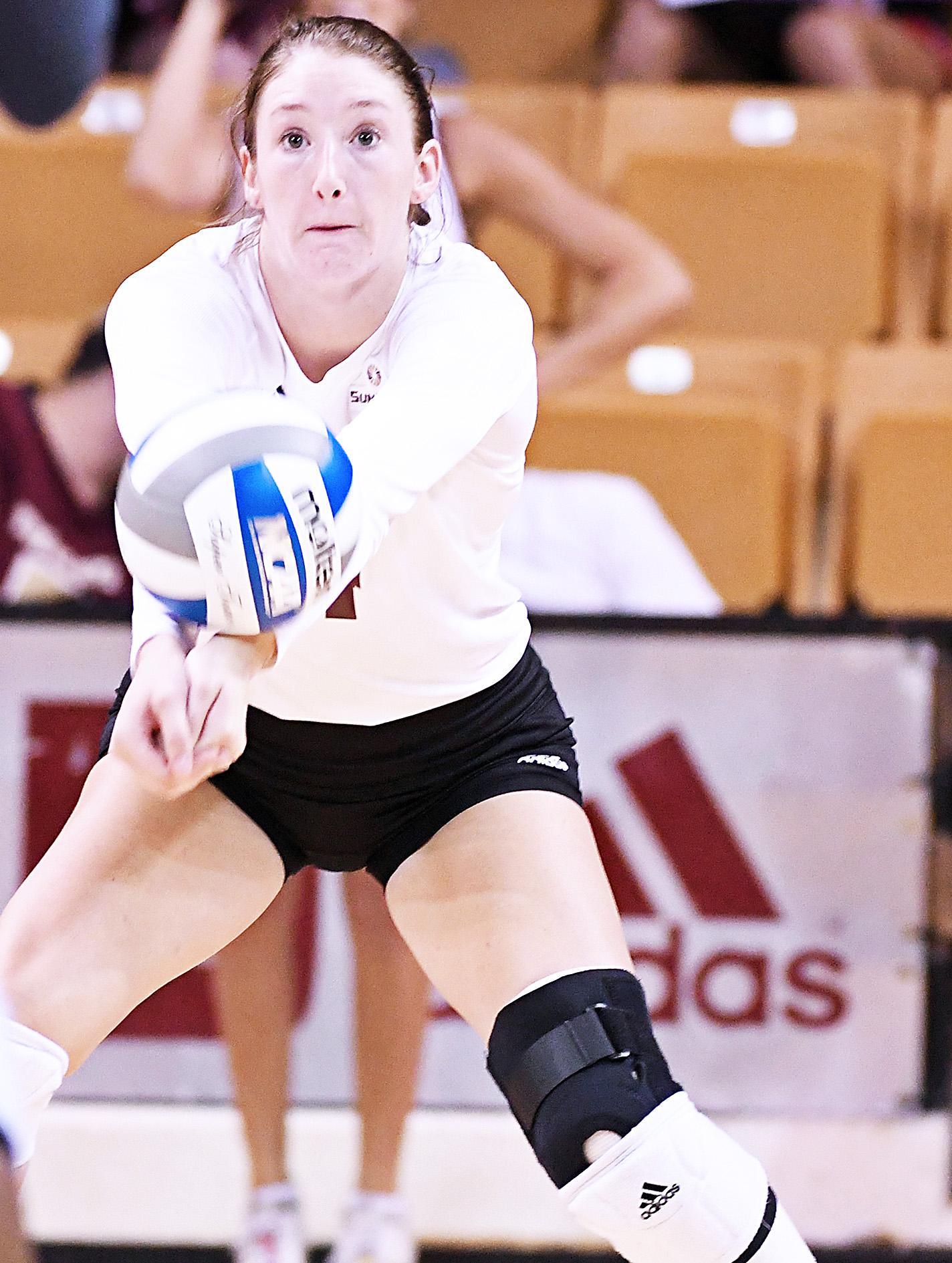 Cheyenne Huskey is receiving a fresh start in San Marcos.

The junior outside hitter/setter transferred to Texas State from the University of Florida, where she played in 41 matches in two years and started in the 2017 national championship game against Nebraska.

But Huskey admits her time with the Gators was difficult. “Coaches can be mean. Things can be said that they might not be true. Maybe you don’t have success in certain places,” she said.

The move to Texas State has offered the 21-year-old from Columbus a new perspective on volleyball. She feels like the game is fun again.

“Being at a big D1 level college, it kind of becomes a job and not so much fun,” said Huskey, who’s studying general studies with an emphasis in Exercise and sports science, psychology and sociology, but eventually wants to study physical therapy. “So, I mean, coming here has given me a start over, and I’m capable of doing my major and having fun with the team and making sure whatever emotionally, physically, I am stable in the spot that I’m at. I’m loving where I’m at, especially with my family right next to me.”

Huskey calls volleyball a family connection. Her sisters Elise and Brandy both played the sport at the collegiate level. Elise played at UTSA, while Brandy began her career at Texas Tech but eventually transferred to UTSA.

Cheyenne says watching her sisters play at the Division I level helped her improve her skills on the court.

Huskey began playing volleyball when she was 10 years old, but she also played other sports. She played basketball and softball. She ran track. She even dabbled in barrel racing but that didn’t last too long. Huskey eventually followed the family connection.

Huskey’s lone role at Florida was as a setter. At Texas State, however, the Bobcats needed her as a hitter. After senior outside hitter Megan Porter suffered a season-ending injury, Huskey was moved to the left side as an outside hitter.

Huskey feels like she’s starting to get settled in her new role with the Bobcats. She leads the team in kills with 167, and was named the Sun Belt Offensive Player of the Week on Sept. 17.

“I’ve been hoping to stabilize myself because I didn’t want to mess up anything for the team,” she said. “I felt like they needed me in that position so I had to fill it. But I feel like it’s getting a lot better. I’m hoping to get better at blocking on that side, of course, I was on the right side. There’s things I can work on and I’m ready to take on the task.”

“It’s taken her time because again remember last year she was a setter,” Chisum said. “All she did was set and block, set and block. Now we’ve got her playing defense. We’ve got her hitting. We’ve got a full rotation. We’ve got her serving. She didn’t serve last year at Florida. So, again, she excelled in those things in high school, but for two years they’ve been complacent. So, it has taken some time.

“I think early on too, she and I talked a lot about it, she felt a lot of pressure on her because she came from Florida and everybody knew that all of a sudden that big Florida transfer is here. All eyes were on her. She didn’t want eyes on her. So, I think now because Amy (Plfughaupt) has had success, Janell (Fitzgerald), Emily (DeWalt) has come along, it’s not all about Cheyenne and that’s a good thing. So, I think that’s helped also.”

“She makes me want to play for her,” DeWalt said. “She makes me a better player ... She came in, she pushed me to be better and it’s been really fun to play with her.”

As Huskey begins to settle in with the Bobcats, she feels the stress lifted off her shoulders.

“I mean, being a setter at that high level, it was pretty crazy,” Huskey said. “I mean, I was in the gym constantly. It’s a big stress relief. I can play like I used to in high school and that was freeing. So, Texas State has done a great job of keeping me stress free.”

For Chisum, she’s glad she could give Huskey a new beginning.

“I love that because all I heard from parent was how unhappy she was, and I hate it when anybody is unhappy,” Chisum said. “But when she gets over here, she’s happy. Her dad told me the first time I saw him at our spring tournament, ‘coach, she’s a different kid. Even at home, she’s happy, she’s relaxed, she’s back to Cheyenne.’ That’s major. You want everybody to be happy and enjoy what they’re doing. Life is too short not to. I’m glad, well lucky for us, but I’m glad she was big enough to recognize it’s not all about volleyball and that’s hard thing to do for a kid that’s 19 years old or 20 years old. So, hats off to her.”