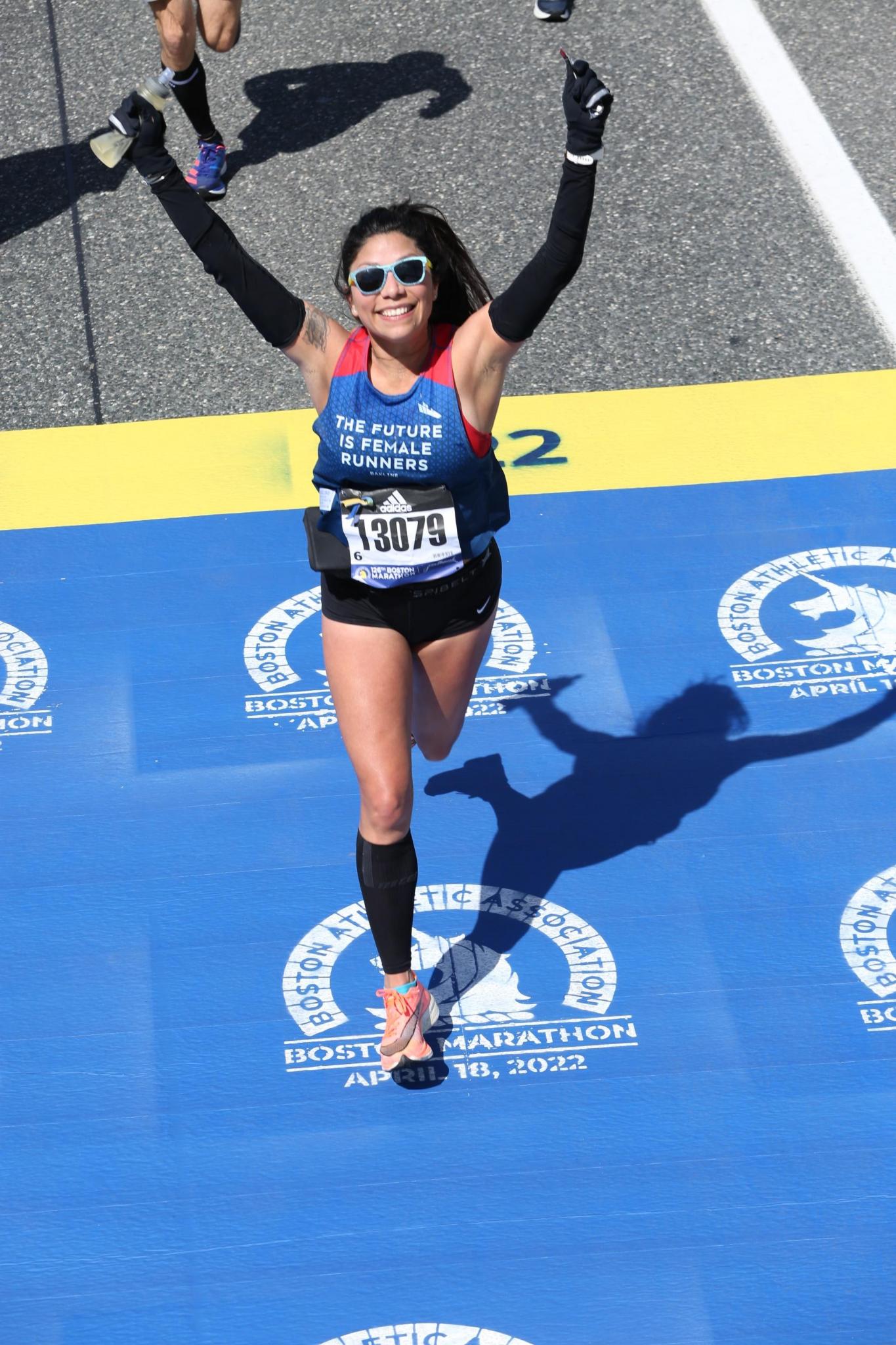 Above, Kelly Figueroa, who grew up in San Marcos and ran track for then-Southwest Texas State University, crosses the finish line at the Boston Marathon on April 18. Below, Figueroa and her college roommate and close friend Joy Burson-Segura pose for a photo after completing the marathon. Photos courtesy of Kelly Figueroa

It’s considered the holy grail on the runner’s circuit. It’s an invitation only event; but only after you proven you’ve got what it takes to participate in the Boston Marathon.

Growing up in San Marcos, locals may have seen Kelly Figueroa running about town. It’s been a part of her life as long as she can remember.

“To say running is my passion is an under statement. Anyone that knows me will tell you that I am crazy about running, but it honestly goes much deeper,” she said. “As a child, I loved the sense of reward and fulfillment it gave me. I can still remember sitting on the basketball court floor, with all the other middle school students, while the coach first introduced the sport of cross country running.”

She said the coach explained what it entailed — afternoon workouts that included long runs in the sun and Saturday morning meets that consisted of racing two miles.

“As I watched other kids cringe at the thought of this sport, my eyes lit up,” she said. “I couldn’t wait to get home to tell my parents there was a sport created just for me.”

It was obvious Kelly was good on her feet. She was accepted to Southwest Texas State University in the fall of 2000 on a track and field scholarship before the university changed its name to Texas State. There she competed on the cross-country team and was a 1500m runner — both indoors and outdoors. While there she helped her team win the Southland Conference Championship five times: Outdoor champions in 2002 and 2004; and indoor champions in 2002, 2003 and 2004.

Having a great family and career years later Kelly’s never given up the passion for running. In fact, this was her seventh marathon and ninth if you include the two Ironman’s she’s completed.

She said the Boston Marathon was different though.

“This one was an emotional one. I have been chasing this goal to qualify and run the Boston Marathon since 2018,” she said. “The Boston Marathon is definitely a bucket list accomplishment in the running world, but it is a journey to get there.”

She said runners must qualify first. Qualifying time is based on your age bracket, and one must run that minimum time requirement at a certified marathon course in the previous year to qualify. Even then, based on the time submitted for your entry, organizers will only accept a certain number of participants due to race capacity starting with the faster times first.

“So, the process can be extensive. My journey included multiple attempts to run a qualifying time and failing, then qualifying but hearing the race was canceled due to COVID, and so on,” she said. “So finally, getting the experience of running the Boston Marathon was quite emotional. I was surrounded by 30,000 other runners from all over the world. More than 12,000 of those runners were women.”

She said this year was special because it was the 50th anniversary of the first official women’s field to run the Boston Marathon. Only eight women finished that race in 1972.

“Therefore, I felt it was appropriate to wear my bib, saying, ‘THE FUTURE IS FEMALE RUNNERS’,” she said. “The course itself is 26.2 miles with a series of rolling hills from miles one through 16. Then miles 16 through mile 21 are four stacked hills with an elevation climb from sea level to 230 feet. If driving up a rise of 230 feet for five miles isn’t enough, imagine running up it after you have already run 16 miles.”

She said out of the 12,000 female runners that crossed the finish line last Monday, she placed in the top 20%.

“I enjoyed every bit of it the entire way. I had earned my way to Boston and was more than excited to have the opportunity to be on that course with other participants who each had their journey of getting to the Boston Marathon,” she said. “I am certain it held a special place in our hearts to all of us. Coming down the last 400m of the marathon, and although my legs were achy and my body was exhausted, I could think that I was doing it. Five years of chasing a goal I had always dreamed of was coming to fruition. I was doing it. Not going to lie; this made me cry, but tears of joy.”

Making the run even more special was that Kelly was able to run with her college roommate and close friend Joy Burson-Segura. 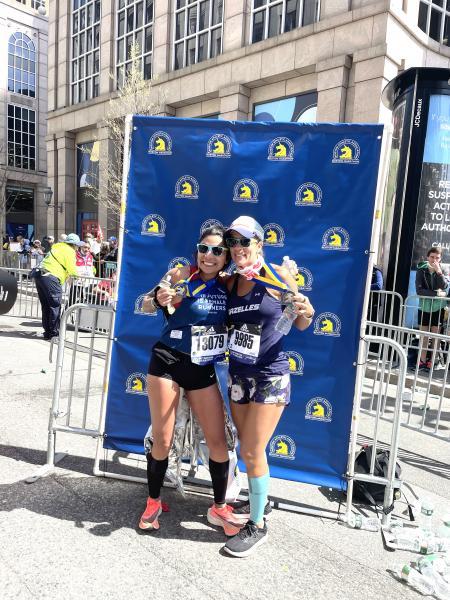 “Everyone needs to have a passion to lean on,” Joy said. “It helps us to be better people. Some people express themselves through music, art, etc. Ours, just happens to be running.

Joy said there was nothing like running. But to run a marathon brings on a whole new challenge to your body and mind.

“How can something so rewarding hurt so bad,” she said. “Or should I say the opposite? Running in this Boston Marathon which marked 50 years of women officially running was so very special and to do it with my best friend and teammate from Texas State made it even more special.”

Kelly said it was running that initially brought them together, and over the past 20 years, they have remained incredibly close friends and continue to leverage running as their love language.

“To experience this moment together with her was the icing on the cake,” she said. “We are both mothers, and wives and have fulltime careers. If anything, running makes us strong emotionally and physically.”

To this day Kelly said running still gives her a sense of reward and fulfillment.

“As I get older, it fuels me to be a better person, whether that be a better mother, wife, leader... etc. It’s difficult to explain, but the best way I can describe it is that when I run, I feel alive, and all my thoughts, emotions, and stress are at peace,” she said.

“My running belongs to me and no one else. Not my husband, my son, my job, but for me. Whatever I put into it is what I get out of it.”

She said it doesn’t matter how slow she’s running; it is just a matter of getting out there, lacing up the shoes, and putting one foot in front of the other. Sometimes simple runs like that are all she needs.