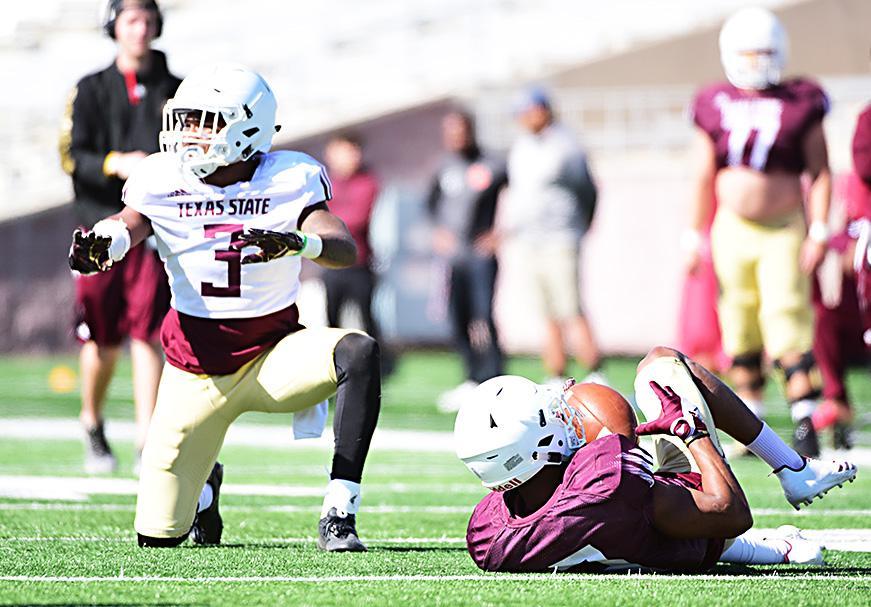 Kordell Rodgers knew he couldn’t get tackled, or at least not by Rutgers’ quarterback.

The sophomore cornerback from Lufkin had just recorded Texas State’s second interception of the game. Rodgers jumped in front of a throw by Scarlet Knight freshman quarterback Artur Sitkowski’s in the third quarter and began running up the sideline.

Sitkowski was the only person standing in Rodgers’ way of a pick six, so Rodgers jabbed right, broke Sitkowki’s tackle and strolled into the endzone for Texas State’s lone touchdown of the day.

“All of us were in the right position,” Rodgers said. “I just seen the ball and I just broke on it. I seen the endzone and I knew I couldn’t get caught. So, I just ran and scored. Like I said, it was really, really fun to do that.

“... (I’d) seen (Sitkowski). I tried to make a little stutter step to the right. You know, I couldn’t let the quarterback catch me. I just kicked in an extra gear, and I tried to go score a touchdown for my team.”

Rodgers’ two picks come after a good training camp. Head coach Everett Withers said Rodgers came up with eight picks during camp, and also jokingly said he dropped eight more. Withers credited Rodgers’ interceptions to being in the right position to come up with the takeaways.

“I think he made plays on the ball,” Withers said. “You know, interceptions come because you put yourself in the right place and you go take advantage of those situations, had (Rodgers) was able to do that. You know, put yourself in the right place with your fundamentals and technique and understanding of the coverages, which he’s really improved on in both areas: fundamentals and understanding of the coverage. It gives you an opportunity to make plays on the ball ... We’ve still got a long way to go with some coverage fits and that type thing but I think Kordell is growing up and learning how to be a Division I cornerback.”

Freshman defensive back Jarron Morris recorded the first pick for the Bobcats, which was the first interception Texas State recorded since Oct. 22, 2016 against Louisiana.

The three interceptions against Rutgers boosted the secondary’s pride after not recording a pick during the 2017 season.

“Freshman Jarron Morris caught the first pick of the game, so I told him on the sideline, ‘Like you know we didn’t have a pick last year,’” Rodgers said. “So, that definitely boosted the defense’s confidence. You know every day we just try to go out there and get better in practice and stuff, and compete. You know, we work on takeaways in practice. So, we were just grateful to get those takeaways in a game like that.”

With three picks to its name, the secondary looks to improve and add onto its interception total against Texas Southern.

“We just go out there in practice and get better everyday,” Rodgers said. “Get better on our craft, technique and just try to compete with the best. We’re going to play good teams every week. So, just try to work on everything we can and go out there and do whatever we can do to get the win.”