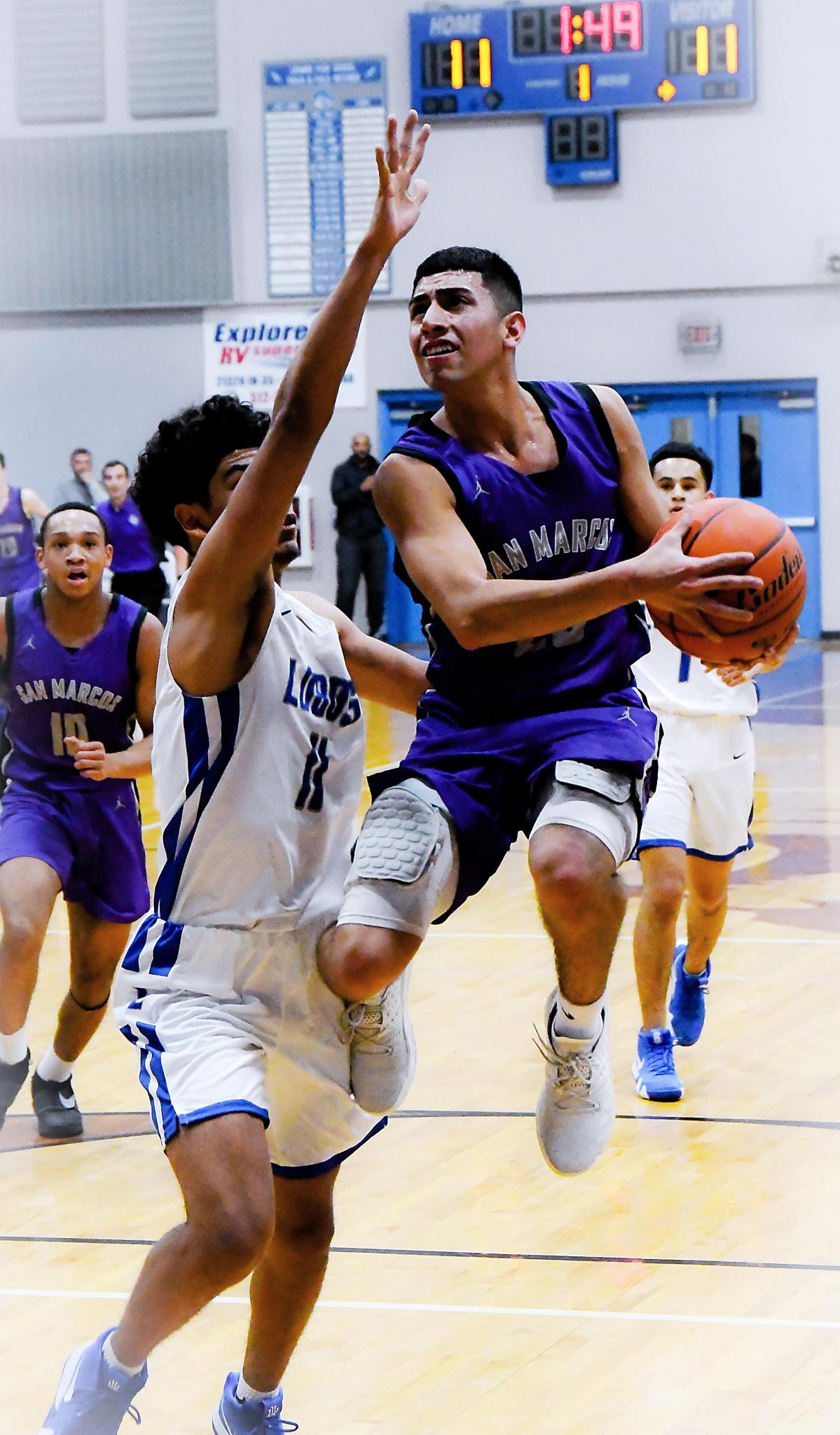 KYLE — Momentum was on San Marcos’ side.

The Rattlers, who entered the third quarter down by 14, went on an 11-0 run to get to within 41-36 midway through the third period.

But an emphatic slam dunk from Lobo sophomore forward Dontae Davis swung momentum in Lehman’s favor and gave it a 44-36 lead. San Marcos couldn’t keep pace with the Lobos and fell, 83-47, on Friday

“I’m really proud of my guys because we were down 13, 14 at halftime,” head coach Thomas Acker said. “It’s the second time in a row that we were down in the first half that we found a way to come back within six, you know, five … We just got to find a way to continue the process after that … They hit some timely shots and then once they got up about 15 in that point of the game it was really tough for us to comeback.”

The Rattlers began the game with the opening points off a bucket from senior forward Mason Green. The first quarter went back and forth and Lehman escaped with an 18-14 lead.

San Marcos struggled in the second quarter and the Lobos took advantage. Lehman outscored the Rattlers, 21-9, to take a 39-25 lead into the half.

“I thought we also started the game well,” Acker said. “I thought we played well in the first quarter. We had a little lull in the second quarter. But there’s a lot of areas in the game where we need to tighten up and be a little bit better.”

Lehman scored first in the third quarter to extend its lead to 41-25. But the Rattler defense tightened up and San Marcos’ offense found a rhythm. The Rattlers went on their 11-0 run, which was capped off by two free throws from Green.

A free throw from Davis ended San Marcos’ fiery run and then his dunk helped Lehman sieze control of the game.

Despite the disappointing outcome, Acker believes San Marcos will be all right this season.

The Rattlers go back to work with old-district foe Austin Anderson coming to San Marcos on Monday at 2:30 p.m. inside the Snake Pit.

“We’re grinders,” Acker said. “We’ll find a way. We’re going to go back to work. We just talked about our last year’s team and how we went through some of these stretches and then we were leading the district for four games and almost five games if we would’ve held onto that Del Valle game. But it’s a completely different team, but we can lean on experience from the previous years to help us guide us through this process. No time for the weary though. We’ve got one practice then we’ve got (Austin) Anderson coming in. So, it’s relentless now. We just got to — everyday we got to get one percent better.”