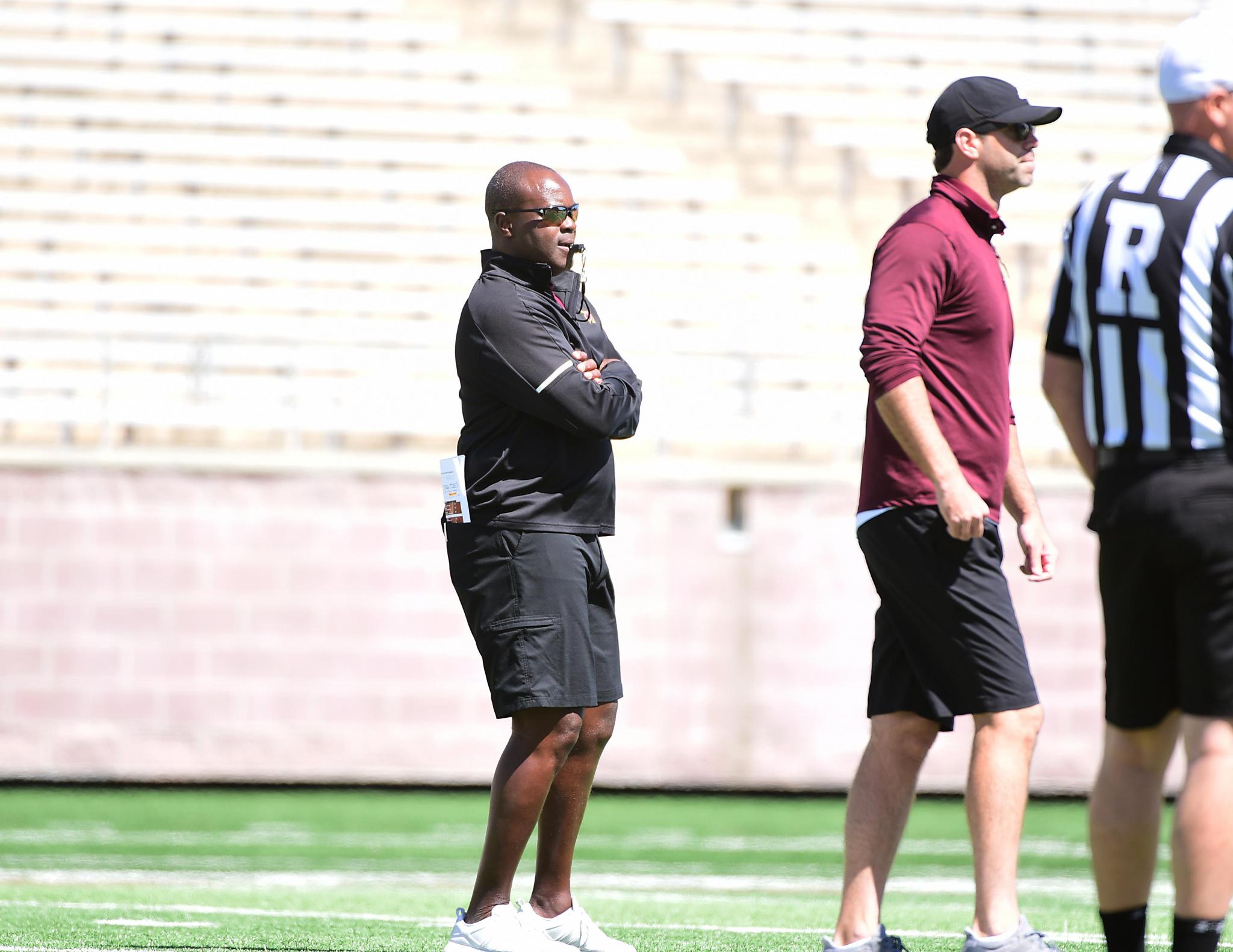 The third-year head coach discussed what fans can hope for in 2018, the Bobcats’ quarterback situation heading into the fall, what to expect on defense, and he addressed comments he made after the 2017 spring game that received negative attention.

Here’s what Withers had to say on The Bottom Line:

On what he’s looked for in his players during the offseason:

“Again, we did a lot of heavy lifting in year one and year two, and we played a lot of young guys because we had to,” Withers said. “Just because of the numbers. We’re finally getting close number wise. We’re still not at 85 (scholarship players). We’re going to have 76 scholarship players this year, but we’re closer than we were. We were at 60-some-odd for the first two years. All of those young guys that played and got their nose bloodied, and jaw set, and all of that stuff, they’re older now in some key positions. We’re still really young in some positions. But I think our leadership has changed. I think the way we lead and how we lead has really changed. It’s really showed up this offseason with our football program.”

“In year two, we were a better football team,” Withers said. “We were a much better football team as far as competing and a lot of things. It didn’t show up on the scoreboard, but everybody in this building saw the growth in our football program, okay. Now what’s got to happen is we’ve got to have some of those young guys develop this summer, and in this training camp, and if that happens, and God-willing we stay healthy because we’re still not deep in some positions, then we’ll have a chance to go out and compete in every game that we play, and that’s really all you can ask. People ask, ‘What’s going to be your record?’ Again, I tell people, ‘Only one guy knows that, or girl … upstairs. So, what we have to do is put our best effort out there each week and compete our butts off and then we’ll have a chance to go win games.”

On the Bobcats’ quarterbacks:

“We’ll go into training camp with all three battling for the job,” Withers said. “Willie (Jones III) will get first crack. He’ll get the first snaps. But he’ll be in competition with Jaylen (Gipson) and Tyler (Vitt). But all three guys have shown some leadership qualities that we need in our football program. Willie, obviously, has the athleticism and the arm and all of those things. What he had to learn was how to lead — How to lead the team, how to lead the defensive line, how to lead everybody — that’s a part of being the quarterback. Jaylen is kind of on that same path. Jaylen didn’t play last year so he’s going into his redshirt freshman year. So, he’s growing in that aspect. Tyler is coming in here as a true freshman, and you can see some of the leadership that he brings to the table already with our team. Our team has really grasped and taken to him about as well as you can take to an incoming freshman quarterback. So, we’re excited about all three of them. It’ll be a great competition this training camp.”

On Texas State’s defense and what to expect under new defensive coordinator Chris Woods:

“Obviously, (linebacker) Bryan London, everybody talks about Bryan London in our defense. He’s been our leader for the last two years. He’s had a really, really good offseason. The things that we’re excited about is getting Ishmael Davis at one end. We’ve moved Dean Taylor to nose (tackle). Dean Taylor is now (6-foot-5), 310 pounds, and then Caeveon Patton that played last year for us, some at nose, sophomore, will be one of our other ends. Caeveon is right around 310 (pounds) and he’s (6-foot-4). So, we’re bigger on defense now. The area that we’ve got to continue to grow is in the back end, in the secondary. We’ve moved some guys around. We’ve found some guys. We’re more athletic. We’re longer than we’ve been. We’re more athletic than we’ve been there. We just don’t have as much experience back there as we need. These guys will be put under fire early in the back end.”

On his remarks after the 2017 spring game about not liking some of his players during his first year as head coach:

“Let me say this because this will be the first time I’ve ever had to say anything about that statement: When I said that, I want everybody to understand, I was a part of that too. I didn’t like me,” Withers said. “I didn’t like the players. I didn’t like the coaches. I didn’t like the head coach. I didn’t like anybody because none of us did what was necessary to be successful. Now, when you take over a program, obviously, the program was 3-9 when I stepped into it, and I thought that program was talented the year before. I thought there was some talent on that 3-9 team. But what I didn’t see, I didn’t see guys that cared about each other. And that’s what bothered me more than anything else was guys not caring about each other, and you’ve got to care. You played this game, and anybody that’s played competitive athletics, you’ve got to care about the guy that you’re going to battle with. And that’s been one of the biggest things that we’ve had to grow in this program: Do you care about the guy beside you that’s sweating … You better care about that guy beside you that’s about to throw up. And to me, that’s what we have now. We’ve got a bunch of guys that care. I mean, I’m talking about that unbreakable bond, that love, for each other that you’ve got to have to go play 12, 13, 14 games in a season and give your all every Saturday. So, we’re closer to that than we’ve ever been since we’ve been here, and that’s what excites me the most.”