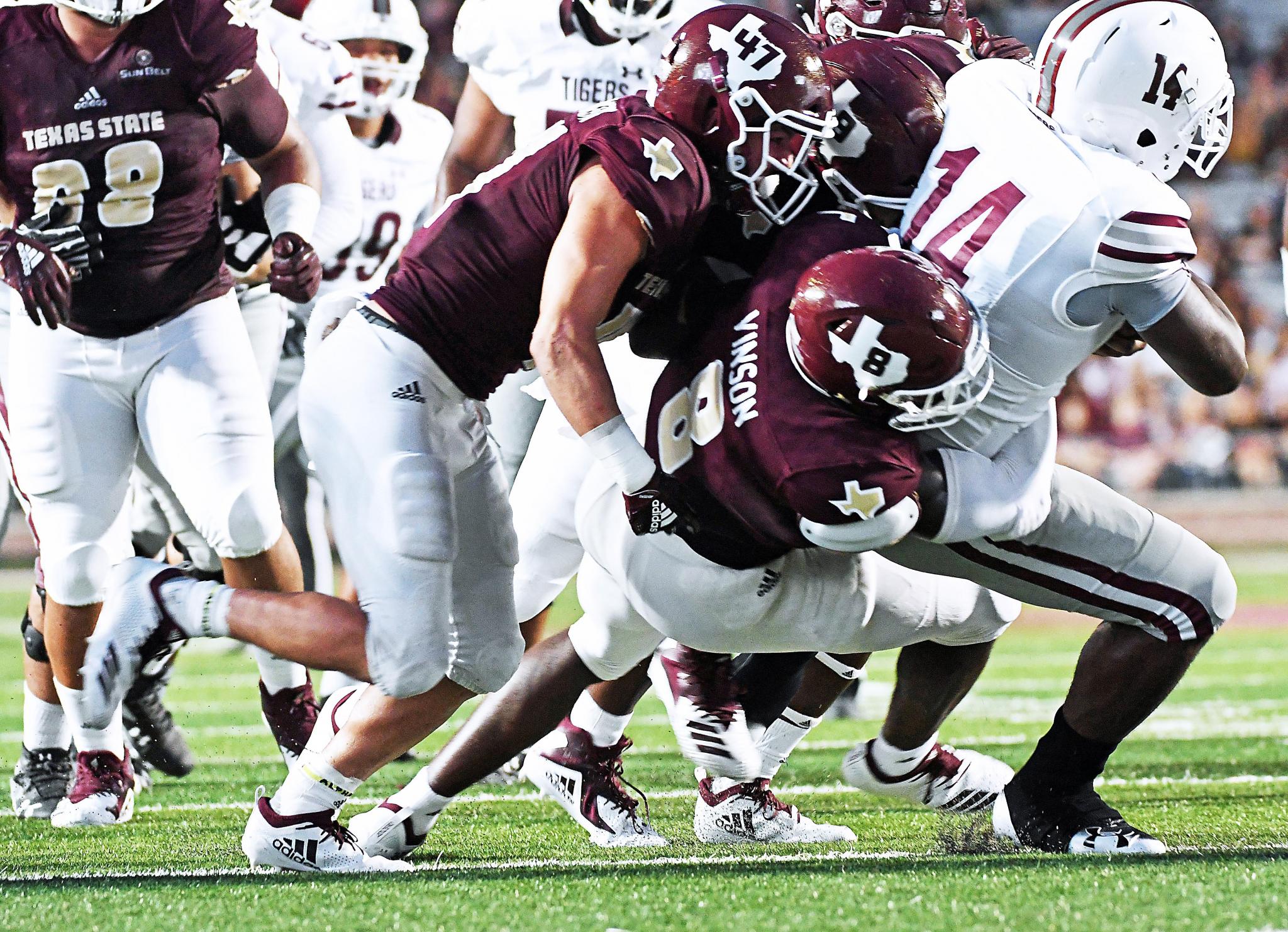 Former Texas State head coach Everett Withers used to ask his players this question about what legacy they wanted to leave.

“What do you want on your football tombstone?”

A.J. Krawczyk remembers when Withers asked him that question. When the senior first moved to safety, Krawczyk said he wanted to be a “baller.” But reflecting back on that answer, he might have been naive.

“Now, I look back on that and I was kind of ignorant,” Krawczyk said. “I really, my tombstone, I want my tombstone to say I had an impact on my teammates as they had an impact on me. If I taught them a lesson, talked to them, sit down talked to them tell them something, I hope something I said sticks and they can use it not just in football but for the rest of their life. And that’s what honestly I hope my tombstone says: I impacted my teammates on a personal level not just on the field.”

Krawczyk along with seven of his fellow seniors —  Sami Awad, Kregg Lemons, Kelton Powell, Elijah Rogers, James Sherman, Tommy Simmons and Tyler Watts — will be honored during Texas State’s senior day celebration prior to the season finale against Arkansas State at 3 p.m. on Saturday inside Bobcat Stadium.

Senior day and the final game of the 2018 season have been overshadowed by the firing of Withers. Defensive coordinator Chris Woods will serve as interim head coach on Saturday.

When the Bobcats (3-8, 1-6 Sun Belt) take the field against the Red Wolves, Woods and the team just “want to go play good football.”

“We want to go play complimentary football series to series and finally put a complete game together,” Woods said. “To have a good special teams, defense, offense, offensive football game. What we talked about with the team, ‘It’s about developing some confidence and finding little wins within the game’ and try to get our guys to understand what that means and just to be a little more consistent in all phases. But, you know, just really want to go play well and we really feel like we’re as good as anybody in the conference physically.”

Arkansas State (7-4, 4-3) comes into Saturday’s game in the hunt to make the Sun Belt championship game. The Red Wolves are tied with Louisiana-Monroe and Louisiana for first place in the west division.

The Bobcats recognize that they’ll be playing another talented team to finish the season.

“They’ve got a lot of talented playmakers on the offensive side of the ball,” Woods said. “We’ve seen them a lot on defense as a part of the breakdowns through the year. I should be more, a little more familiar with their defense at this point than their offense just from having seen them as breaking down some opponent offenses to this point.

“They’re a very talented team. Very, very talented. They’re always good upfront on the defensive line, I know that. They have a couple guys that are pretty good that can cause some havoc for you. They challenge you on the outside on defense. They’re not overly flashy but they just go play and they try to play hard and well. Offensively, they’ve got really tall receivers. They’ve got some big skill that they’ll challenge you on the outside part of the field with jump-ball type of situations.”

As senior day approaches, Krawczyk, who came to Texas State as a walk-on but was put on scholarship by Withers, is thankful for the bonds he’s created during his time in San Marcos.

Krawczyk knows he’ll be emotional when he takes the field one last time as a Bobcat.