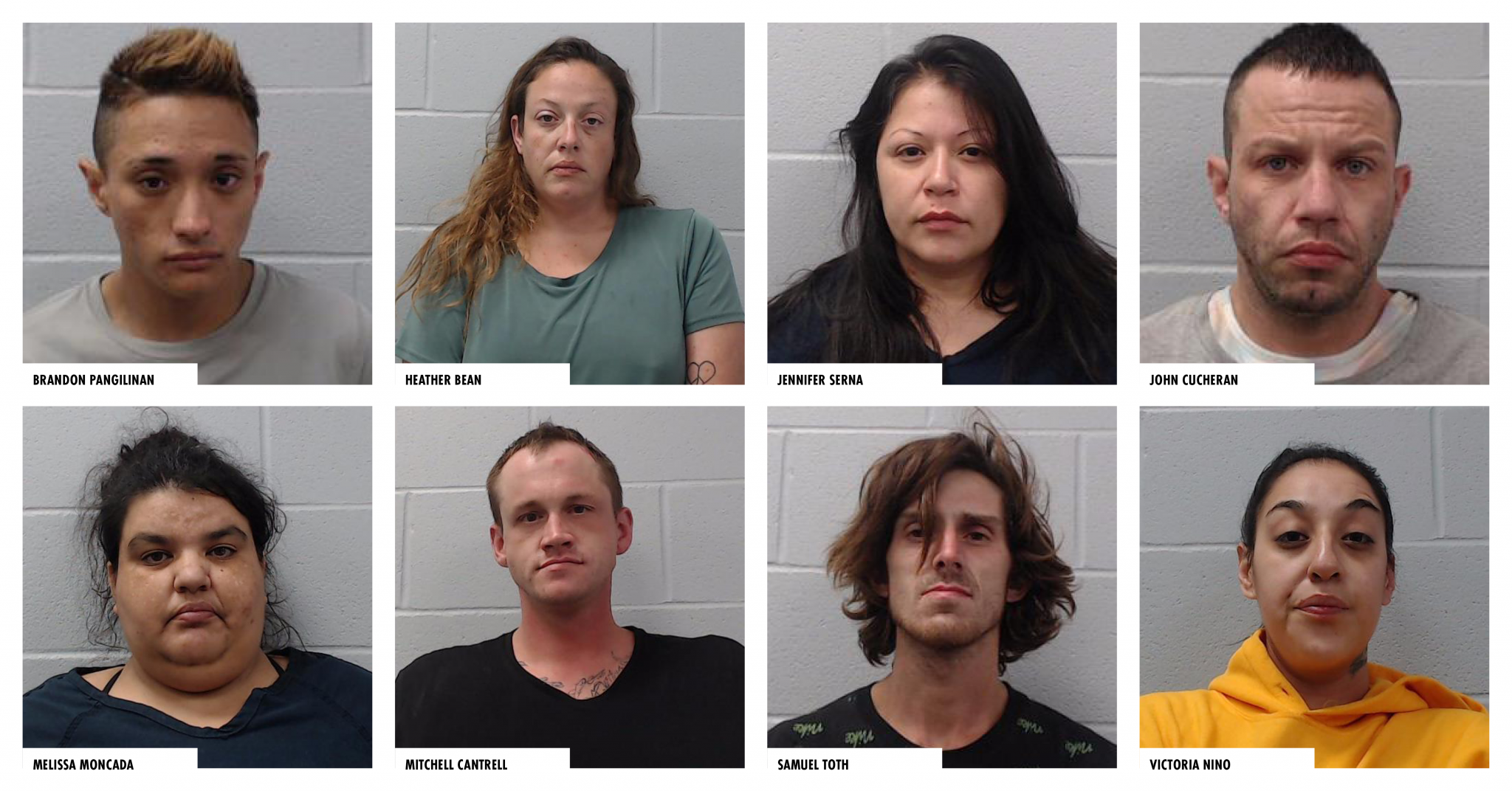 Photos courtesy of the City of Kyle

Kyle police made several arrests in connection with identity fraud cases that occurred over the last six months.

The Kyle Police Department arrested eight for their involvement in the fraud cases, the City of Kyle announced Wednesday.

“I would like to take the time to recognize these officers for their diligent work,” Kyle Police Chief Jeff Barnett said in a statement. “Catching these perpetrators is often time consuming and difficult work, but it is important because the victims of these crimes are often numerous and have to deal with the impacts for years down the line. We hope this can help start to set things right for those affected.”

Police said KPD officers received a report of dogs left in an unattended vehicle at the Kyle H-E-B on Saturday, July 31, 2021, where officers discovered a fictitious temporary license plate on the vehicle upon arrival. Police later discovered that the vehicle itself was listed as stolen out of Austin. Cucheran and Pangilinan were taken into custody, officials said. An investigation found that there were 59 pieces of identifying information and 51 stolen and altered checks, as well as multiple ledgers of people's names and social security numbers in their possession. Cucheran and Pangilinan were both charged with fraudulent use/possession of identifying information as well as several narcotics-related charges.

KPD arrested Toth and Serna on Saturday, Sept. 11, 2021, after a patrol officer noticed a vehicle in the parking lot of a gas station at 22801 Interstate 35 displaying a stolen license plate. Police said an investigation resulted in the discovery of more than 50 pieces of stolen mail, 70 pieces of identifying information, 18 stolen credit and/or debit cars and 40 altered or fictitious government documents. Additionally, police uncovered another stolen vehicle was located in Kyle during the follow-up investigation. Toth and Serna were charged with fraudulent use or possession of identifying information, fraudulent use or possession of credit card or debit card information, theft of mail, tampering with government records, and additional charges for narcotics and weapons possession.

Bean was arrested on Friday, Oct. 22, 2021 after officers received a suspicious vehicle report at the Storage King at 19580 Interstate 35. Police identified Bean and later charged her as a suspect in a theft that occurred at the storage units. Officials said police determined that Bean was operating a vehicle that she fraudulently obtained from a dealership using stolen identification. Police stated that a search found four stolen credit cards, 56 pieces of identifying information and 102 pieces of stolen mail. Bean was charged with fraudulent use or possession of identifying information, theft of mail, burglary of a building, possession of a false ID, fraudulent use or possession of credit card or debit card information, theft of property and unauthorized use of vehicle. Police said Bean and a male accomplice, later identified as Cantrell, were charged with narcotics possession.

KPD arrested Nino on Thursday, Dec. 2, 2021 after officers responded to The Strand Apartments — 150 Amberwood S — for suspicious circumstances. Upon arrival, Nino attempted to evade officers in her vehicle. Nino, however, was arrested. Officials said police found that the vehicle had been stolen out of Austin and later discovered three stolen credit cards and more than 30 pieces of stolen mail. Nino was charged with burglary of a vehicle, forgery, theft of mail, evading arrest, driving while intoxicated, narcotics and weapon possession, unauthorized use of a motor vehicle, and additional warrants from other law enforcement agencies.

Moncada was arrested on Tuesday, Dec. 28, 2021 following a traffic stop for speeding. Police said a search of the vehicle turned up 250  pieces of stolen mail, 61 stolen checks, 16 credit and/or debit cards and more than 50 pieces of identifying information Moncada was charged with fraudulent use or possession of identifying information, theft of mail, 16 counts of credit/debit card abuse, and multiple narcotics-related charges. She had previously been arrested by Kyle police in 2018 for similar stolen mail and identity theft charges.

Officials said the Kyle Police Department Criminal Investigations Division is working on notifying all victims of the frauds and thefts and arranging for items to be returned to their rightful owners. For more information on ways to prevent identity theft, go to www.usa.gov/identity-theft.

Kyle Police Department offered residents the following steps to actively protect themselves from becoming a victim of identity theft: