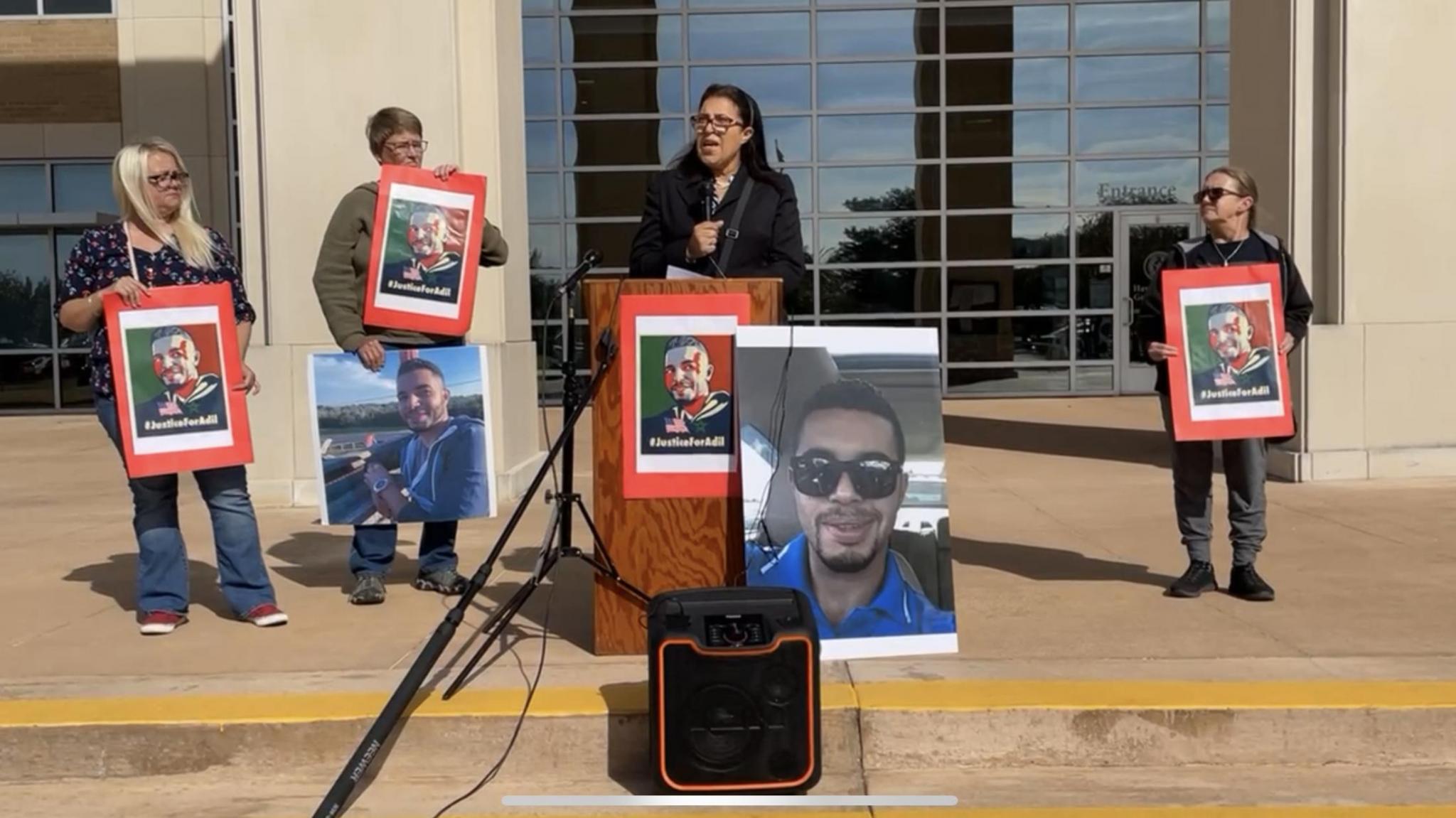 Family of Adil Dghoughi, who was killed in Martindale when he was shot while driving away from a neighborhood driveway, gathered to continue their plea for answers.

Dghoughi’s mother Fatiha Haouass, who traveled from Morocco to ask for justice for her son, and brother Othmane Dghoughi spoke at a press conference hosted by Mano Amiga in front of the Hays County Government Center on Monday.

“My Adil has been living in the United States for over 10 years during which he never has a single problem with the police because he had always known and respected the law of this country,” Haouass said. “On Oct. 11, Terry Turner chose and decided to execute my Adil. He was just lost and parked on the side to set up his GPS. The young human being he shot was a son, a brother, a husband and a friend who cared for many people who beloved him.”

The Caldwell County Sheriff’s Office charged Terry Duane Turner, 65, for Adil’s murder, arresting him on Oct. 22 — 11 days after he was killed. Turner posted a $150,000 bond just hours after being booked into the county jail.

In a news release following Dghoughi’s death, CCSO stated that deputies responded to the 100 block of Tina's Trail in Martindale for a report of a shooting where they found one man who sustained a life-threatening gunshot wound and was transported to Ascension Seton Hays.

Officials said the shooting occurred after the homeowner confronted a vehicle parked outside the residence. Neither the shooter nor the victim were immediately identified.

According to an arrest affidavit, Turner told deputies that he woke up to use the bathroom and then proceeded to open his front door where he discovered a gray 2016 Audi parked in the driveway next to his pickup. Turner then ran to his bedroom, retrieved a handgun and ran back outside.

Turner told deputies the vehicle “rapidly” accelerated in reverse and he proceeded to chase the Audi. Turner struck the front driver’s side door window twice with his handgun and then fired the weapon, striking Dghoughi. He returned to his residence and called 911, where he stated “I just killed a guy.”

Turner claimed that Dghoughi, “tried to pull a gun on me, I shot,” and “he started racing away and I ran after him. He pointed a gun at me and I shot.”

Deputies, however, did not locate a firearm inside the vehicle or in Dghoughi’s possession, the affidavit stated.

“[Turner] said he stood by the car and knocked on the window, so he was close to see that my Adil had never a gun was in his hand,” Haouass said. “Instead he was having his phone trying to set up a destination with the GPS. And yet, he shot my Adil in the head in cold blood. So, I’m here to ask all the people who are in charge of the case to grant justice for my Adil and for the family.”

“We’re just needing to look for answers,” Othmane said. “He was there? He was not there? We don’t want something that didn’t happen. We want to ask questions and if he comes forward to say he was not there then that’s it. We’ll accept it and we’ll go. We just need answers and that’s all. We’re not here to point fingers.”

“Just to be clear, really it’s Mano Amiga as an organization that filed the open records that is especially curious about Sgt. Eric Villapando,” Buckley said. “It’s not something that the family has initiated or anything like that. The family is just seeking answers.”

Charles Soetching, a San Marcos attorney and friend of Villalpando, visited the press conference to deliver a letter to the event’s organizers, stating that Villalpando had no knowledge of the incident that occurred on Oct. 11.

“He doesn’t know what happened. He has no idea,” Soetching said during Monday’s press conference. “He resents the fact that you’ve tried to make it out like he knows something about it. He knows nothing.”

Soetching later told the Daily Record that Villalpando was asleep at the time Adil was shot.

“[Villalpando] doesn’t want to be dragged into this because he had nothing to do with it,” Soetching said. “I believe the high 90% percentiles of people are asleep at 3 in the morning and by the time you put in your noise machines, your location in the house, he just didn’t know anything had happened until he went outside the next morning and saw the crime scene stuff.”

Following Monday’s press conference, Mano Amiga and members of the family attempted to visit Villalpando in his office in the constable’s office inside the Hays County Government Center. Constable Pct. 1 David Peterson spoke briefly with the crowd, saying that his office doesn’t have any additional information to share.

“These situations can happen at any time and as far as my deputy, Eric Villalpando, had nothing to do with the situation that happened,” Peterson said. “So, that’s all I can give you … He heard nothing. He saw nothing.”

Regarding the investigation into Adil’s murder, Othmane said the family is asking for the Caldwell County Sheriff’s Office to conduct a through investigation of the incident.

“We also ask the [Caldwell County District Attorney] to do what’s right for my brother’s case,” he said. “We’re not asking for too much. We’re just asking to do what’s right. That’s all we’re asking you to do.”