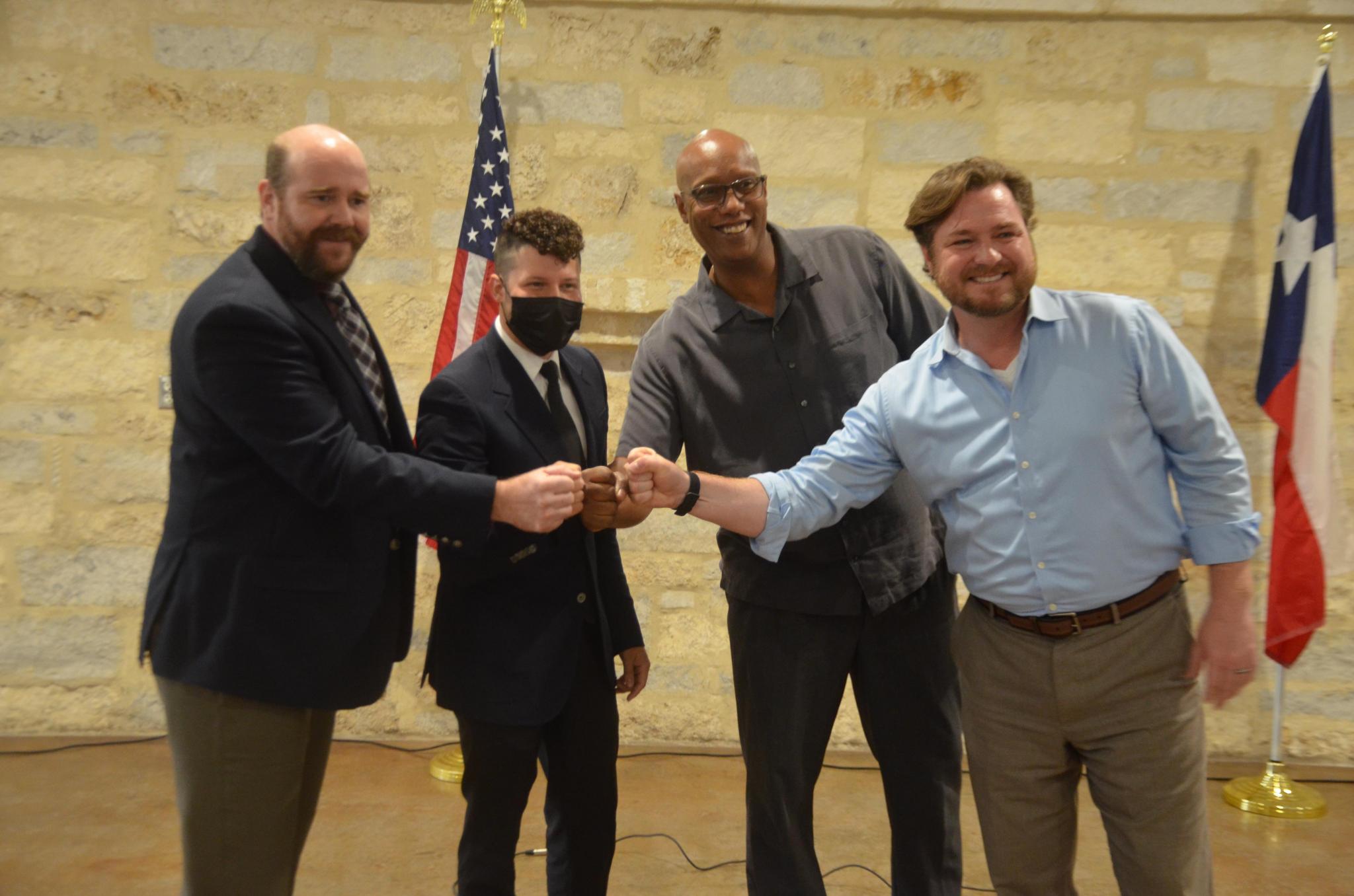 San Marcos City Council candidates for places 5 and 6 shared their views for San Marcos’s future during a candidate forum hosted by the Four Rivers Association of Realtors and the San Marcos Area Chamber of Commerce.

Following brief opening statements, Gleason and Sambrano were asked what's the most important role of a city councilmember?

Gleason said a big part of the role on the city council is being a leader in the community.

“I think it’s really important to keep in perspective that we represent all citizens of San Marcos,” he said, “and that we strive that everyone has a chance to thrive in our community and put policies in place that work for everyone. So, I think a big part of it is being a leader.”

Sambrano said taking care of the people in the community is an important role as a city councilmember, highlighting the efforts he helped with during February’s Winter Storm Uri.

“A lot of people were hurting. I saw that there was a need,” Sambrano said. “I knew that there was some resources that the city was kind of delayed on some of the assistance that we were needing so I took it upon myself to raise over $20,000 to put people in hotels. People like single mothers who had kids that had no electricity. There were homeless people who had no resources that were stuck in tents in freezing weather and they could potentially die … I went out there and I did it. I used my resources. We ended up getting more city involvement — code enforcement and the police.”

Each candidate running for council was asked about how they would the housing shortage facing Central Texas and San Marcos.

“San Marcos is growing, Hays County is growing, and we need to have housing stock,” Sambrano said. “We are seeing the shortage of housing stock that is so low that it’s driving prices so high that people are being priced out of town. And almost virtually every day I’m getting messages from people saying, ‘please continue to fight for this because we need housing. We are moving to Maxwell. We are moving to Lockhart. We are moving to Seguin because we can’t afford to live here. Our families are here but we can’t afford to live here. We work here in San Marcos but we can’t afford to live here.’ And I believe that we should not be a community that says, ‘you can live here. You can play here. You can swim in our river here. But you can’t live here unless you make an income of $100,000 or more.’ … We need more housing options for missing middle, townhouses, condos to multifamily to single family homes. We need it all and we need to build in a smart and sustainable way.” Gleason said the city council worked hard to pass a new development code in place a few years ago.

“I’m pretty proud the community came together to try to find and put these tools in place,” Gleason said. “Is it monolithic? No. I have supported some of these so-called, ‘missing middle,’ projects and some of them, I have not. These need to be looked at on a case-by-case basis … Land use is extremely important and needs to be looked at on a case-by-case basis when it comes to the zoning code, when it comes to zoning. But as the code itself, we put some of these tools in place to work on some of this stuff and we have a lot of housing that is going to happen on the east side of town. A lot of homes, thousands of homes, and I’m proud that the community has come together to put those projects in place. Look, we have a lot of growth. It’s going to happen, and we have to help provide housing options and put those tools in place.” The candidates were also asked what their top initiatives would be if voted to the city council. Sambrano said he would like to address homelessness in San Marcos.

“There’s a lot of money that can be allocated to deal with homelessness right now ... What’s been talked about before city council is, ‘what should we do? Should we allow a ban? Should we kind of take up what the state has taken on?’” Sambrano said. “And I think that we have very many good organizations in town from Salvation Army, to the HOME Center that deal with a lot of local homeless people, to Southside Community Center with Ruben Garza. I believe I’ve talked to them multiple times. If I am elected, I hope I would be appointed to the homelessness coalition committee because I want to work together to start an initiative where we can provide resources to those people that need it.”

Gleason said his top priority would be to attract high-paying jobs.

“High-paying jobs bring upward mobility,” Gleason said. “They expand the property tax base. We can take pressure off homeowners. It provides income to the community, which helps out small businesses and it helps out the whole community. Second, complete and finish some infrastructure projects. Whether it’s flooding, roads, bridges, complete them in a timely manner. It is imperative, the amount of construction that we have going on, that we complete these projects in a timely manner and get them done efficiently. We’ve had a lot of neighborhoods that have suffered for long enough. Third, and finally, support more first responders. We have a 90% increase in violent crime over the last 10 years. That’s real and that’s serious … And so, I hated to raise taxes to help fund them but if that’s a decision I have to, I’m proud of it.”

After their opening statements, Prather and Rockeymoore were asked to share their thoughts regarding San Marcos’s eviction ordinance, which requires landlords to post a 90-day notice of eviction.

Prather admitted that he wasn’t aware of the ordinance in place but said he’s aware that there are many community members struggling.

“San Marcos, we have a high number of folks who live in poverty,” Prather said. “And I always talk about looking through the lens of empathy and yeah I know that landlords have these mortgages to pay and luckily there’s been a lot of federal resources, a lot of government resources that have been put into city and local governments to help people caught back up on their rent … Those programs will eventually end and we don’t want to disincentivize people to go out there, get a job, work, make sure they’re paying their bills. But, we definitely always need to be looking through the lens of empathy. I’m not one that wears my faith on my sleeve but it’s important that we take care of the least among us.”

Rockeymoore said that the city finds itself in a good budgetary position compared to other municipalities, and that it should take care of those in need.

“As far as the eviction ordinance is concerned, when it is no longer in effect, we will be able to look at the situation and see how many people have these issues with eviction,” Rockeymoore said. “And then we need to make sure that our property owners are taken care of as well and that we don’t put them in bind, more so than they already are. We need to get access to that federal money. Now, I know there have been some hold ups with it at the state level and that is politics as usual. Right? Gridlock at every level. So, we need to break that gridlock. We need to work together and we need to move forward.”

Rockeymoore and Prather were also asked how they would address the housing shortage facing Central Texas and San Marcos.

Rockeymoore said the city needs to provide missing middle housing, which describes a wide-variety of multi-family housing options with multiple units in walkable neighborhoods, in parts of town where they’re appropriate.

“We have successful neighborhoods that adding new types of developments in there without approval of the residents, then we’re going to continue to see the kind of problems we have now,” Rockeymoore said. “People are going to be crying out, ‘no more development. No more building.’ And, I don’t know if it’s so much that they don’t want to build it, because we’re all aware that San Marcos is growing and has been for awhile. I think it’s that they don’t want to see the city change in character. And again, change is inevitable. It is the only constant. So, over time, we will see that change and it cannot be stopped as we become the megalopolis complex and Austin and San Antonio become a single city.”

“Talk is one thing but action is what we need,” Prather said. “The San Marcos Housing Taskforce put forward an action plan with 22 specific items that would address housing affordability — lot sizes, accessory dwelling units, utilizing city lots. There was a range of recommendations they made that kind of went on deaf ears when it went to city council. We need regulatory pathways to affordability, housing affordability, and not regulatory roadblocks and that’s what’s happening right now.”

The candidates were also asked what their top initiatives would be if voted to the city council.

Prather said one thing he would try to do is bring back civility to the city council, stating that the best way to do that is to move the meetings back to fully in-person.

“I know it was kind of a stopgap measure having these remote meetings, but I think that has led to a lot of the discourse,” Prather said. “It’s easy to talk bad about your colleagues when you’re just looking at a laptop … Most governments are meeting in person and we need to be doing that as well. And then, secondly, the situation with public safety is very concerning. San Marcos, we’ve had five officers killed or wounded in the past three years … So, making sure that we support our law enforcement and the dangerous and difficult work they do, building relationships with their community and trust with the community. And ultimately, bring civility back to back to City Hall.”

Rockeymoore also said civility among the city councilmembers would be something he would address.

“Civility on the dais is a really important thing. I’ve had a good number of citizens talk to me about that. They see people arguing up there, they’re like, ‘What’s going on?’” Rockeymoore said. “... You can be friendly with each other and you leave that stuff out there on the dais that needs to be there and you seek compromise, which is what’s necessary when you have a nation, state and a city as divided as we sometimes tend to be. But I don’t think we’re as divided as people really think we are.”

Early voting for San Marcos City Council places 5 and 6, as well as the 13 city propositions on the ballot, begins on Monday, Oct. 18 and stretches through Friday, Oct. 29.