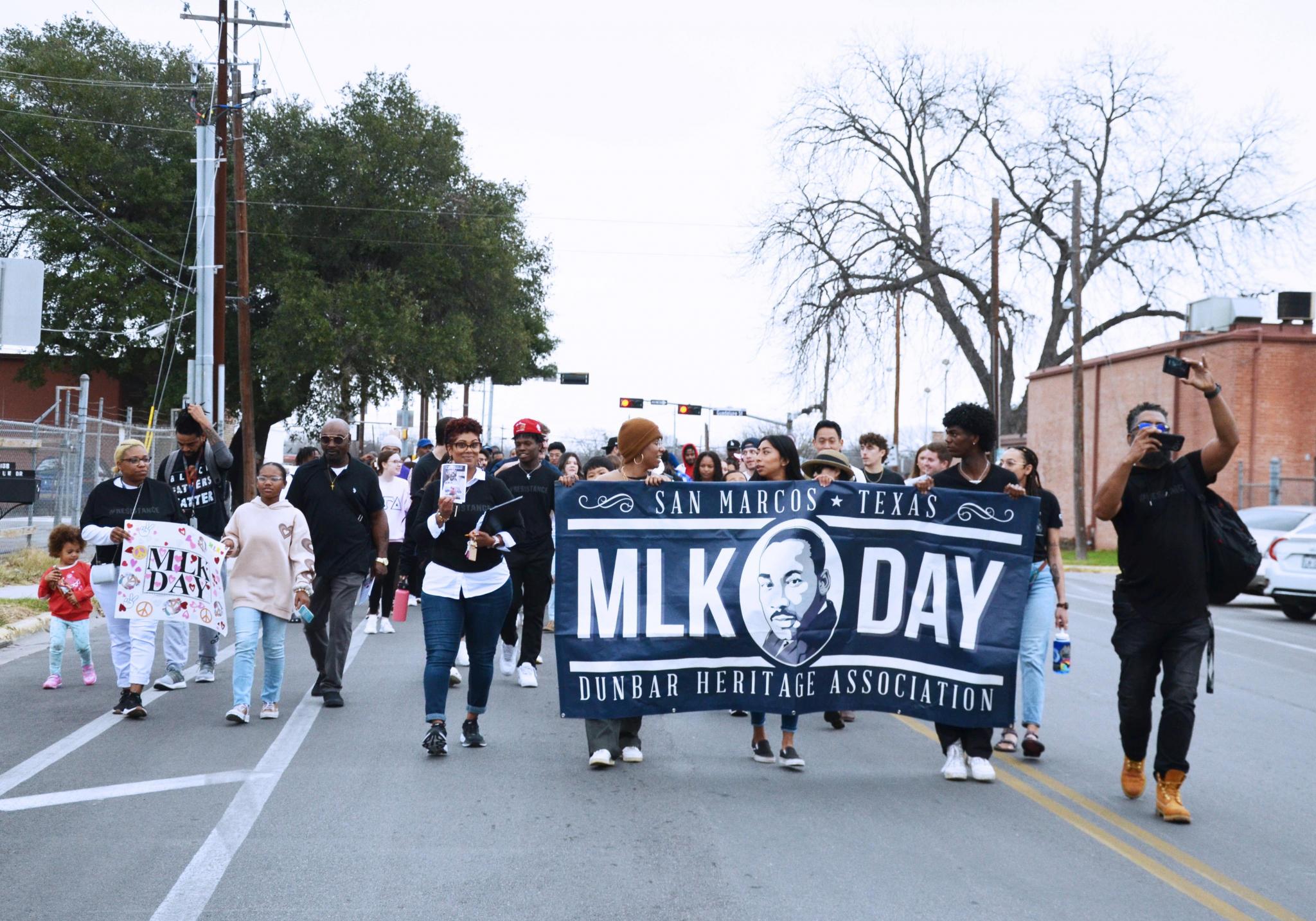 Monday’s events began with a wreath laying ceremony at the LBJ-MLK Crossroads Memorial followed by the freedom walk, a ceremony at the Hays County Historic Courthouse and a reception at the Dunbar Recreation Center.

“Your presence creates an opportunity for us to come together as a community in solidarity, appreciation and reflection on how we are keeping Dr. King’s idea alive to make the promises of democracy real,” said Shannon Marshall, a member of the Dunbar Heritage Association. “The social bridges we build within our community today and throughout the year help strengthen empathy, respect, peace and unity while we embrace and celebrate a diverse and pluralistic society.”

“Last [year’s march] was big, this year was bigger,” DHA President Alex Banbury said. “So, we want to continue to grow this.”

The Dunbar Heritage Association began honoring King’s legacy on Saturday with the MLK Kid’s event at the San Marcos Public Library, which featured arts and crafts, activities and games aimed at teaching youth about the legacy of Dr. King, followed by an MLK walk around the library. 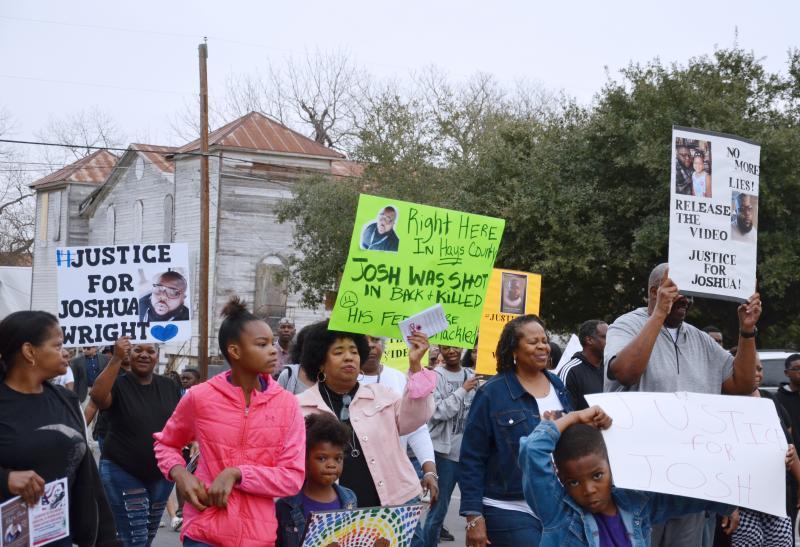 Above, participants call for “Justice for Joshua Wright,” a Hays County inmate who was killed at Ascension Seton Hays while receiving medical care on Dec. 12, 2022.

“The sentiment behind this theme seeks to highlight the ways in which Black people have used various forms of resistance to tirelessly struggle against oppression and White supremacy,” DHA Secretary Jonafa Banbury told the crowd gathered at the Hays County Historic Courthouse. “Black resistance can be seen throughout the Civil Rights Movement where Dr. King featured prominently as a leader in the Black community. Other examples include leaders of slave rebellions, abolitionists, Black educators, Black faith institutions, HBCUs, and members of the Black arts movement.” 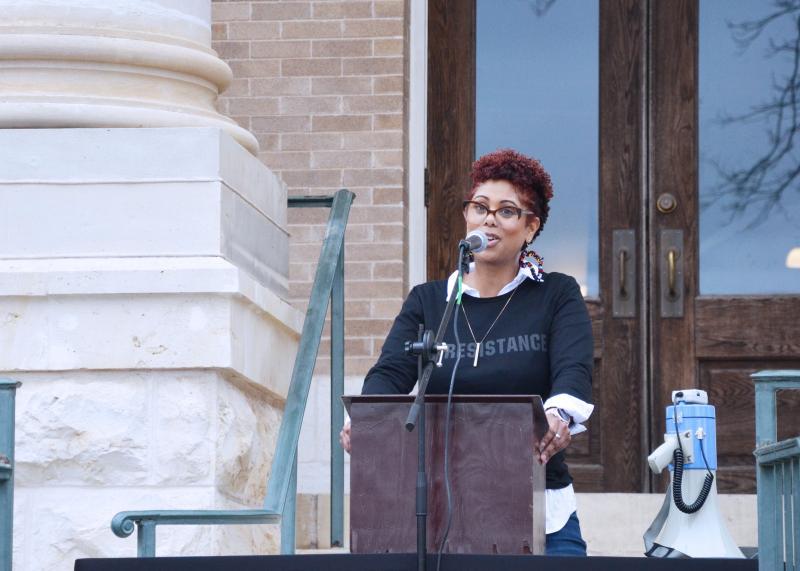 Above, DHA Secretary Jonafa Banbury speaks to a crowd gathered for a ceremony following the walk at the Hays County Historic Courthouse.

“They were all engaging in resistance by fighting against oppression right here in San Marcos,” Jonafa Banbury said. “And, improving the lives of not only Black people but everyone around them. By choosing this theme for the programs, events and discussions we hold in 2023, we are creating a space for their stories to be heard with the foresight to create stories of our own of how we overcame and how we will continue to overcome. How we resist is how we overcome.”

Damphousse shared a memory of taking his family to the Lorraine Motel in Memphis, where MLK was assassinated.

“The moving part was such sorrowful because of his death, but it wasn’t as moving as today  ...  because of the joy that I had as I watched us all gather at the corner of MLK and LBJ, two leaders in the Civil Rights Movement in the 1960s, to see how symbolically our university and our city came together and how we marched together,” Damphousse said. “Today, I’m filled with joy looking at my fellow Bobcats, my fellow San Marcans here to see how we all came together at this moment. It’s so moving.” 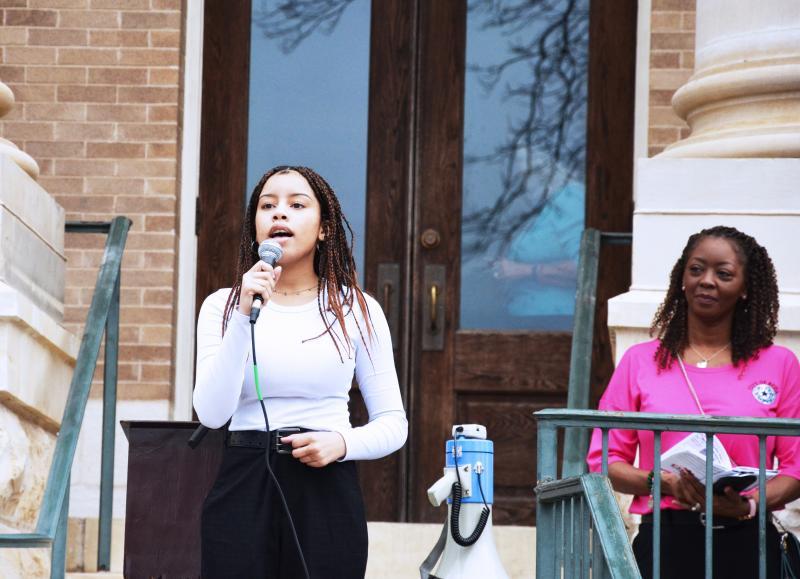 Above, Anijah Hughes sings “Live Every Voice and Sing,” the Black National Anthem.

Mittie Miller, DHA Vice President, concluded Monday’s ceremony by reminding everyone in attendance that MLK Day is not just a day off but a day of service.

“It is a day of getting to know who your neighbor really is, and to not only know them, but to love them, have peace with them and learn their culture so you can understand them,” Miller said. “So with this said, together we are better. Together we can be the dream of the King. We shall overcome.”