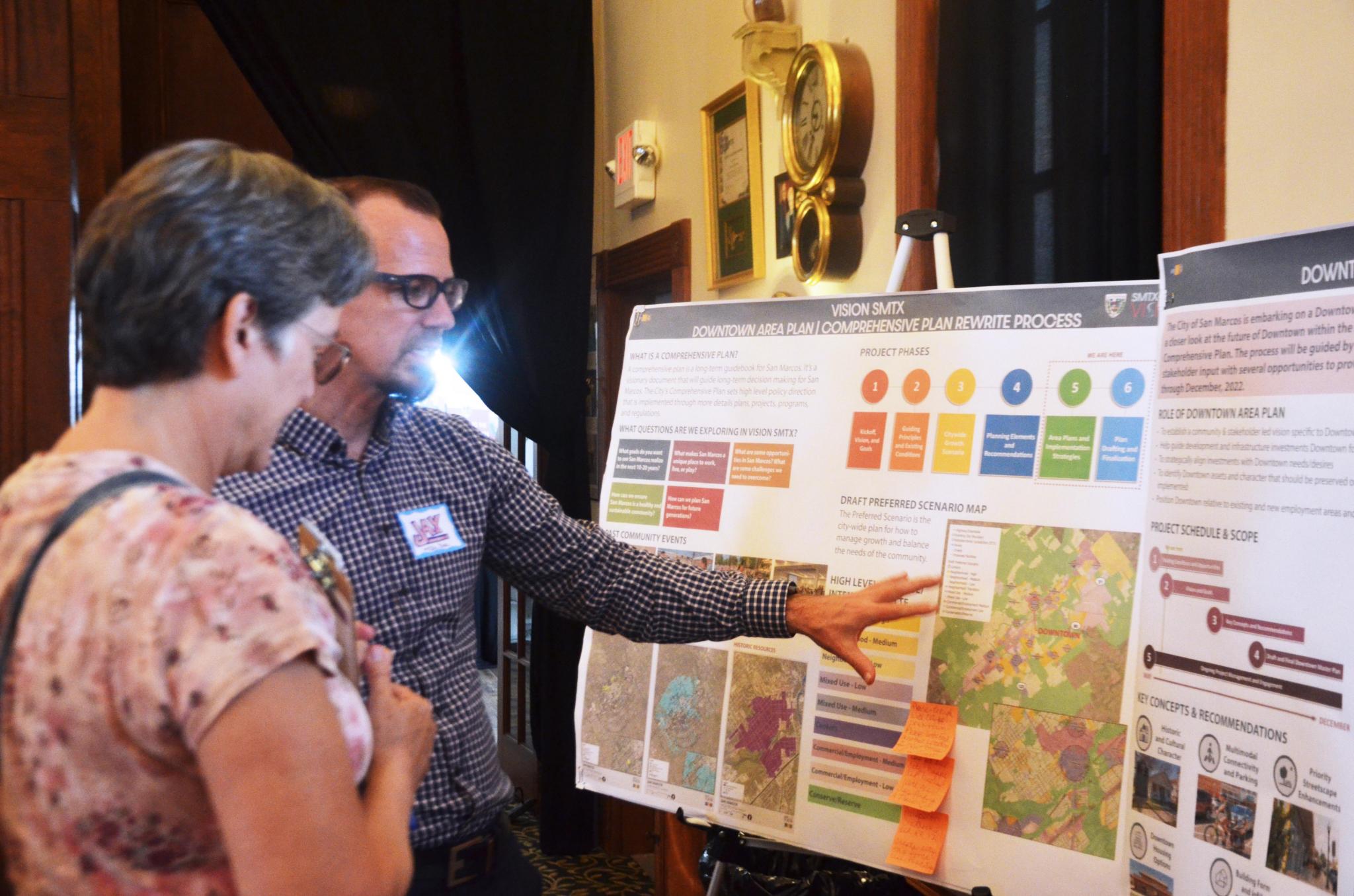 The City of San Marcos hosted a community workshop, marking the beginning stages of its Downtown Area Plan, on Wednesday at the Price Center. Above, a planner from MIG shares information about Vision SMTX and the Downtown Area Plan. Below, City of San Marcos Planning Manager Andrea Villalobos speaks to the crowd gathered at the workshop. Daily Record photos by Nick Castillo

San Marcos residents filled the Price Center to provide their vision for the future of downtown.

The City of San Marcos hosted a community workshop on Wednesday, marking the beginning stages of its Downtown Area Plan. City Planning Manager Andrea Villalobos and Elly Schaefer, planner with MIG, spoke to the crowd about the new downtown plan before they were able to visit interactive stations where they could provide feedback about what they want to see in the downtown plan.

“We’re here to talk about downtown and why that’s important is because last time we talked about downtown was 2008,” Villalobos said. “So, about 15 year now was the last time we did a downtown master plan. So, we’ve seen a lot of change and we know downtown is important. It’s a unique part of our community and it’s very eclectic. With that brings both opportunities and challenges.” 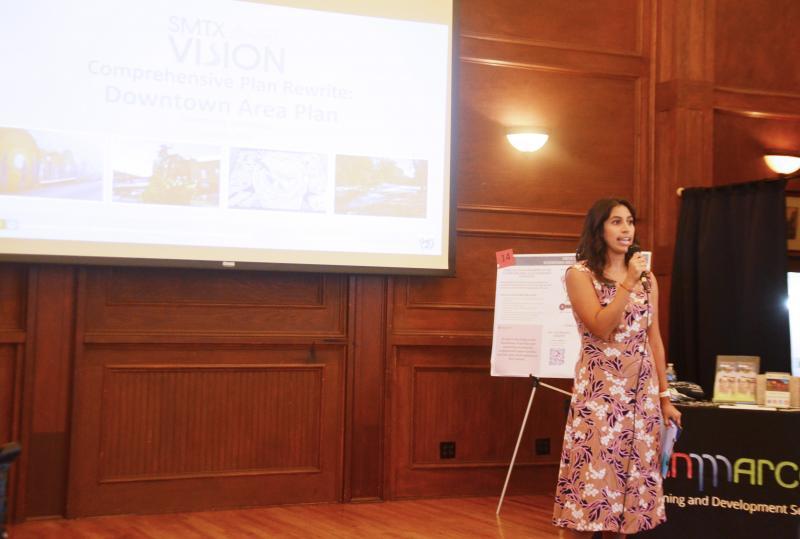 Schaefer said the Downtown Area Plan, which is a component of the larger Vision SMTX Comprehensive Plan project being developed, will be a targeted and focused effort to engage downtown stakeholders and the community.

“We’re looking to develop a vision that’s really specific to downtown,” Schaefer said. “How we want to see it change and grow, and to be improved and enhance and really preserve what we love about downtown today.”

The Downtown Area Plan has several listed purposes, according to Vision SMTX, including the establishment of a community and stakeholder led vision specific to Downtown; guidance for development and infrastructure investments in downtown for the next 20 years; strategically aligned investments for downtown; identification of downtown assets and character to preserve or enhance; and to position downtown for existing and employment areas and mixed-use centers.

Matthew Mendoza, a San Marcos resident who also serves on the city’s planning and zoning commission, said he attended Wednesday’s meeting because downtown is important to him.

“Just because being a citizen, I want to see how it’s going to go because if things work out well [in downtown], it’s for the rest of the neighborhoods and the community,”  Mendoza said. “So, I really want to be engaged and see who people react and what stands out.”

Mendoza said he’d like to see a parking garage downtown to attract river tourists to stay and visit San Marcos.

“I live in Rio Vista,” Mendoza said. “So, on a Saturday or Sunday, any holiday, and four days out of the week, I can’t go down Cheatham [Street] to come over to Guadalupe. I know the city has always said, well, you know, the tourists are good but if you watch them, they turn left on Guadalupe and they go to Sonic and they get out of town. Or, they go to H-E-B and they right back out of town. Why can’t we garage downtown to force them to see [San Marcos]? And you know what, the people who own businesses, let them make money off of it with a requirement that if we’re going to have a garage down there that every Thursday in the park, every Sights and Sounds and anything that the city puts on, it’s got to be free.”

He also added that he’d like to see more local businesses move downtown.

“I want to see boutiques. I want to see mom and pop shops,” Mendoza said. “I want to see a place where children can go in and go see a movie, go eat pizza and know that they can come back and that’s what I really want to see for downtown.”

Garren Lester and Erin Cuming, who attended Wednesday’s meeting, both said they’d like to see the Downtown Area Plan foster a space where the community feels welcomed

“It seems like [downtown is] pretty catered toward a specific demographic currently,” Cumins said. “Just broadening that and catering to more people.”

For San Marcos residents who were unable to attend Wednesday’s community workshop, a virtual survey is available at www.visionsmtx.com.