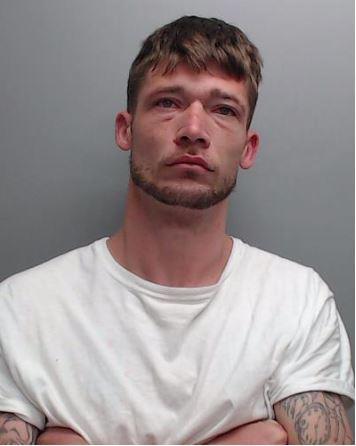 James Michael Harvey, 32, was arrested for burglary of a building, possession of a controlled substance and unauthorized use of a motor vehicle after he stole a man’s computer, keys and work vehicle.

The Hays County Sheriff’s Office stated that deputies responded to the 900 block of Canyon Wren in Kyle on Wednesday at approximately 7:23 a.m. Officials said the victim arrived at his workplace, went inside and placed his keys and computer on a desk inside the building. He then went to the restroom and upon returning, his computer, keys and vehicle were gone.

Deputies on the scene learned that the company work truck that was stolen had GPS tracking installed. The registered owners provided real-time locations and citizens in the area saw a suspected man fleeing from the area. HSCO said deputies were able to locate the truck in the backyard of a private residence in the Crosshouse Estates subdivision off of FM 150 in Kyle.

Harvey was arrested and booked into the Hays County Jail, where his currently awaiting magistration.