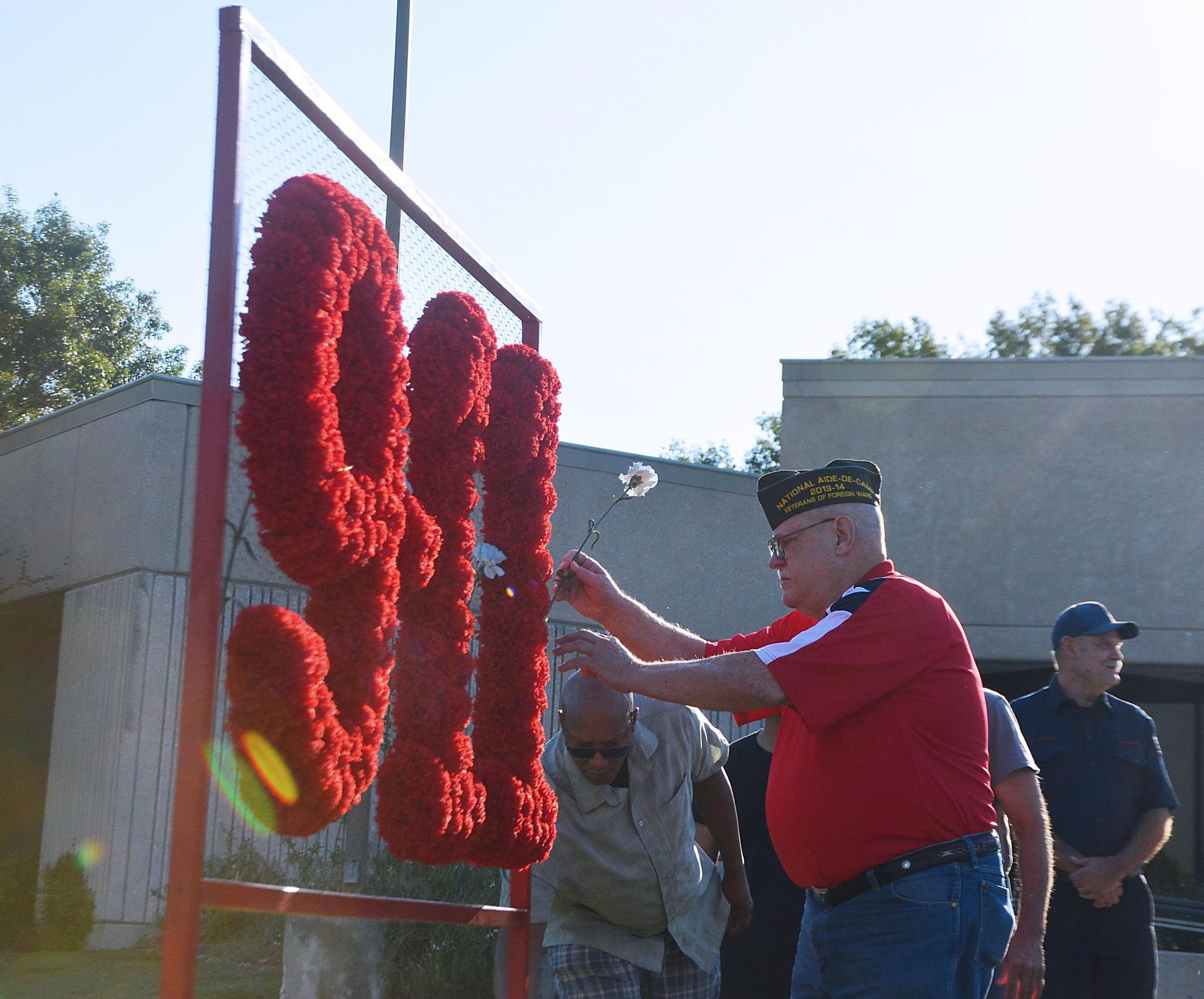 David Adams, a U.S. Navy veteran, places a flower on a 9/11 memorial outside of San Marcos City Hall on Saturday. Daily Record photo by Nick Castillo

“You remember where you were when the first plane hit the World Trade Center?” Jeff Latham asked a crowd gathered at San Marcos City Hall on Saturday.

It’s a memory etched into the minds of many Americans. The images of that fateful Tuesday morning in New York City, Washington D.C. and Shanksville, Pennsylvania are unforgettable — The horror of seeing two commercial airplanes crash into the twin towers, later another into the Pentagon, and one crashing into a field in Pennsylvania after passengers and flight crew are believed to have thwarted off hijackers attempts at attacking the U.S. Capitol.

“I want you to think about all those victims today and all the survivors and all the families that are still hurting and even grieving today from the lost of all those in the those airplanes and those  in those building,” said Latham, pastor at Westover Baptist Church and chaplain for the San Marcos fire and police departments. “I want you to think about all of those firefighters, police officers and paramedics. As everyone was running out of those buildings, our guys, our first responders were running in to save lives. And those folk are our heroes.”

Saturday morning’s ceremony also featured the “tolling of the bell,” a tradition in fire service honoring those killed in the line of duty, followed by a moment of silence.

“Twenty years is a long time but we promise to never forget,” San Marcos Fire Chief Les Stephens said. “We promise to always remember … This is why you see on the back of some of our fire apparatus that says keep back 343 feet because 343 firefighters died doing their best to save those in the twin towers on September 11th. Never forgetting means never forgetting.” 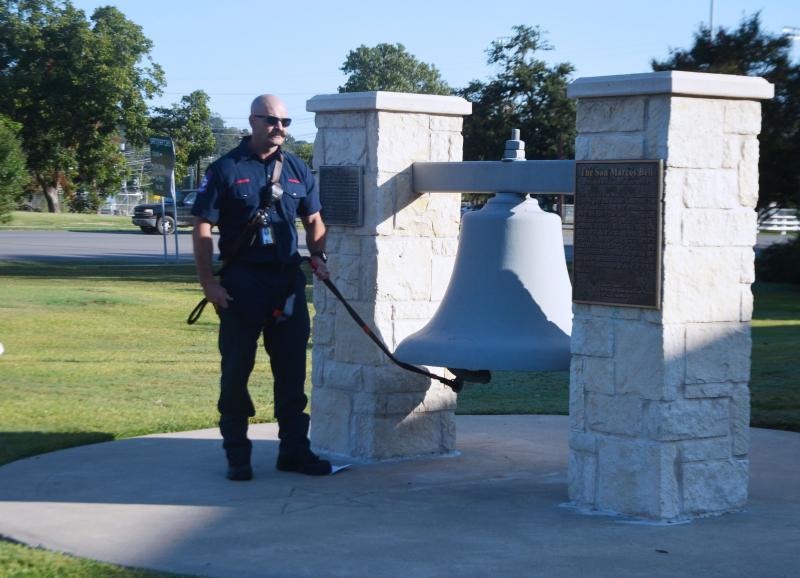 The City of San Marcos's 9/11 ceremony on Saturday included a "tolling of the bell," a tradition in fire service honoring those killed in the line of duty. Daily Record photo by Nick Castillo

The event ended with U.S. veterans, law enforcement, emergency responders and members of the San Marcos community placing flowers on a 9/11 memorial.

David Adams, a U.S. Navy veteran who was among those who placed a flower on the memorial in front of City Hall, recalled his memories of 9/11, saying that it was “totally unbelievable.”

“I remember it coming across the television and I thought, ‘this can’t be true’,” Adams said. “And then when I finally realized, ‘yeah, it is true,’ I thought about all the devastation that happened throughout Pennsylvania, and the Pentagon and in the twin towers and all the people that lost their lives for no reason whatsoever, and the cowards that did it. I was still on active duty at the same time so I got involved in that over there with Afghanistan and Iraq.”

Adams said he chose to attend Saturday’s ceremony to honor those lost in the attacks.

“It’s been a quick 20 years,” he said. “I hope we never forget what took place and never let it happen again.”