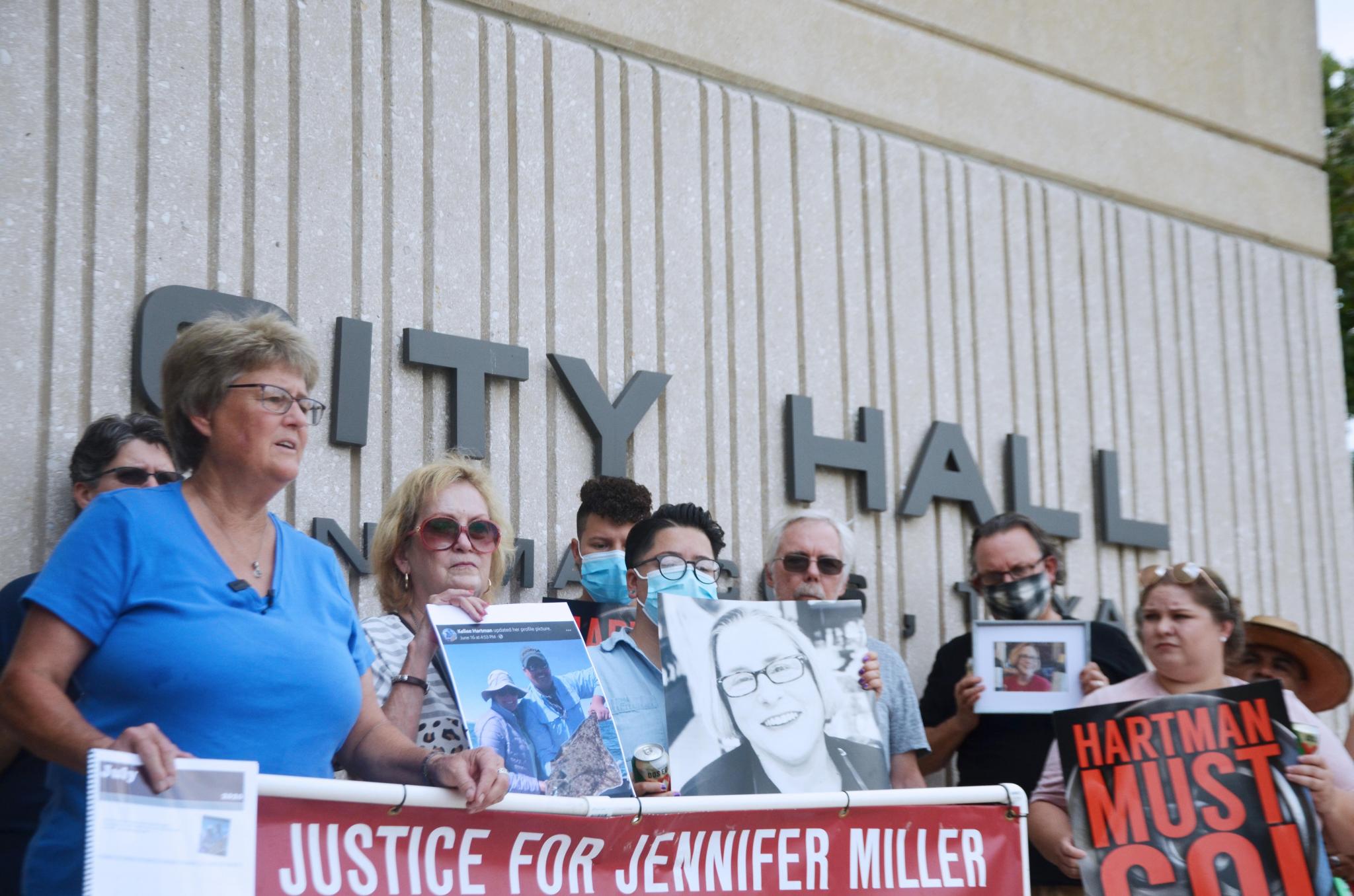 Above, Pamela Watts speaks during a protest Wednesday where she, and supporters, continue to seek justice for Jennifer Miller. Daily Record photo by Nick Castillo

Pamela Watts continues to plead for justice and accountability for the death of Jennifer Miller, who died in a car crash caused when an off-duty San Marcos Police Department officer collided with her vehicle in June 2020.

Watts — Miller’s life partner — and a group of supporters met at San Marcos City Hall on Wednesday, hoping to provide City Manager Bert Lumbreras and Mayor Jane Hughson with a personalized calendar stocked with photos of Miller and an image of the crash that occurred.

But when she arrived inside City Hall, Watts was told neither were available.

A City of San Marcos spokesperson said the city would not comment regarding Lumbreras’s or Hughson’s availability Wednesday, or whether either knew if Watts was visiting City Hall, citing pending litigation.

The collision occurred on June 10, 2020 in Lockhart when SMPD Officer Ryan Hartman, who was off-duty, traveled eastbound at the 2200 block of Maple Street and Watts and Miller were traveling southbound in the 1300 block of South Cesar Chavez Parkway.

Miller was killed in the collision when Hartman ran through a stop sign and collided with the car carrying Miller and Watts, police records show.

“Jen was trapped in that car while Ryan sat on the curb worrying about what was going to happen to him,” Watts said. “Jen died a slow, painful death trapped in that car at his hand. The only solace I have is that she was unconscious. But who knows what somebody unconscious can still feel, I don’t know. But I want to, and hope to, one day be able to lay Jen to rest and be able to say, ‘Rest in peace Jen.’ I can’t do that without accountability. I can’t.”

According to Hartman’s deposition, police reports and forensic evidence, Hartman was driving 16 mph over the 30 mph speed limit on a partially gravel road with an open container of Dos Equis that was ¾ empty, talking on the phone, and he failed to stop at two stop signs before colliding with Watts’ vehicle.  A search warrant obtained on suspicion of driving while intoxicated due to the open container detected no alcohol hours after the crash.

Lockhart Police Department’s investigation recommended a charge of criminal negligent homicide. But a grand jury reviewed the charge and returned a no-bill, leaving civil action as Watts’ only recourse where she could file for damages for her sustained injuries.

“He had, at the accident site, ample opportunity to prove his sobriety. He refused to do so,” Watts said. “He wouldn’t let them do a blood draw and he was drinking water feverishly. It was hot so nobody thought anything of it I guess. But when they uprighted his truck, they found the 24 ounce can of beer … in his cup holder with the salts. And he doesn’t want to prove his sobriety? You or I would’ve immediately extended our arm and said prove me innocent. That’s not what he did. 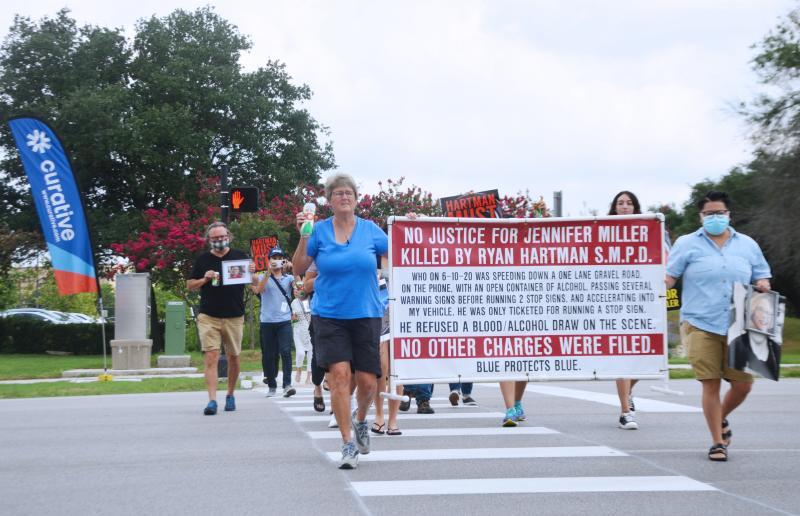 Watts said she wanted to present the calendar to Lumbreras and Hughson on Wednesday to show that the city has had ample time to “do the right thing.”

“They continually choose to do nothing,” she said. “Anybody that looks at the tremendous mountain of evidence, accumulated by the Lockhart Police Department, they called this criminal negligent homicide, and you look at all the facts, there's no way you can render any other verdict than that. But I think (Bastrop County District Attorney Bryan Goertz) knew that he didn't want this to go to trial because he didn't want to adjudicate a cop. They continue away with stuff and this is hard for me, my brother's in law enforcement, but law is law. Right is right and wrong is wrong. And it doesn't matter what your career path in life or who you are in life, the rules should be the same. And it should be equally applied to everybody.”

After Watts was unable to provide city leadership with the calendar, she said she would continue to speak out for accountability.