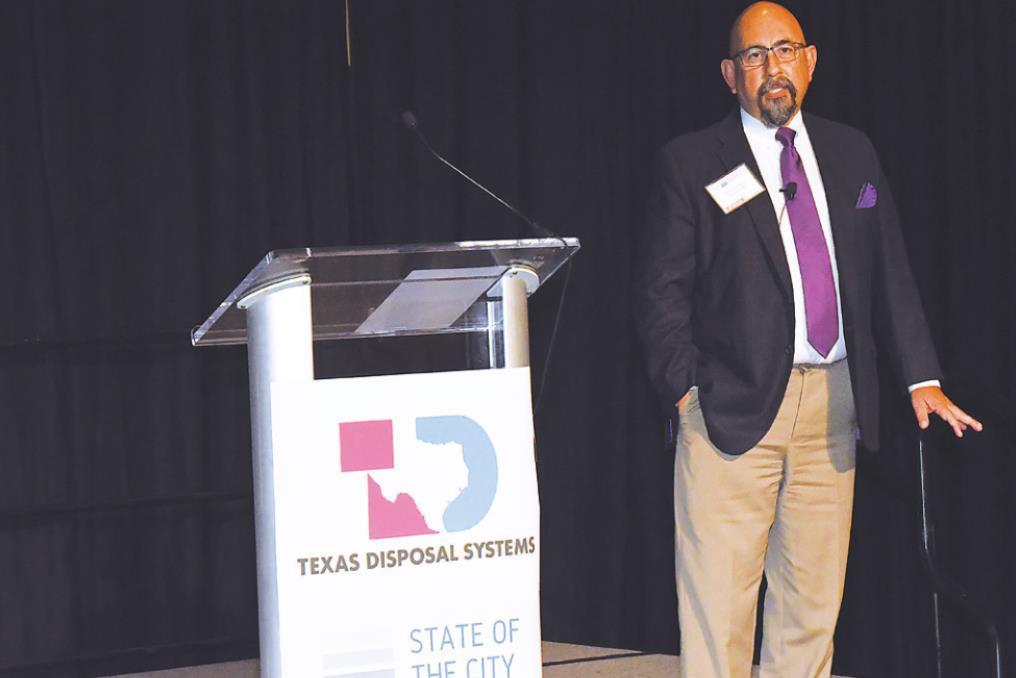 Hughson and Cardona spoke at the socially distanced event inside the Embassy Suites San Marcos Hotel and Conference Center on Thursday.

“A lot has happened since we did this last year,” Hughson said. “We faced some challenges this year but we’ve learned to adapt in ways we never thought we would. We found ways to connect with family and friends, safely from a distance; businesses have found new ways to provide goods and services; and we’ve done remote learning with our kids. Unfortunately, many of us have been ill, or lost friends and family to COVID-19 and we mourn those losses.” 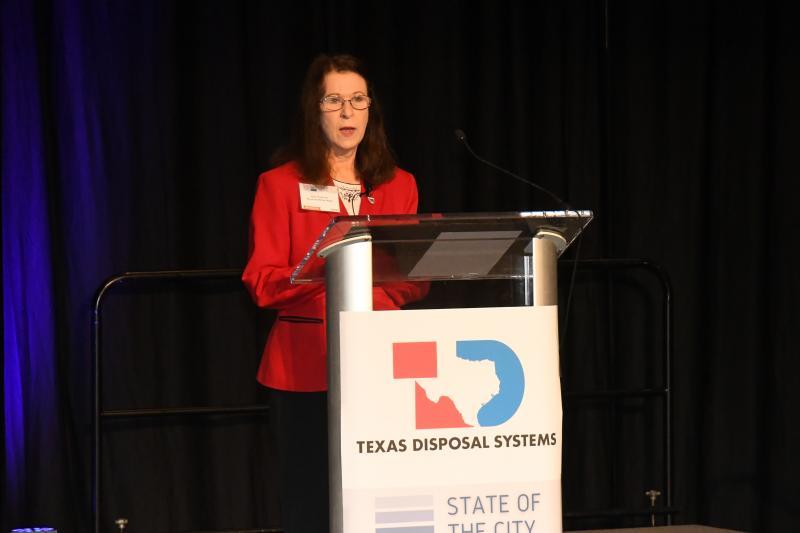 Above, San Marcos Mayor Jane Hughson discusses the challenges the city has overcome during the COVID-19 pandemic and February's winter storm during Thursday's State of the City luncheon. Daily Record photo by Lance Winter

Hughson’s remarks addressed the city’s perseverance and the strength of San Marcos’ citizens amid the COVID-19 pandemic and February’s Winter Storm Uri.

Multiple videos were shown during the mayor’s speech, showing the city’s response to adapt to the coronavirus, including the library, parks and recreation department and regional animal shelter’s adjustments to continue to provide services to San Marcans. Videos were also displayed, highlighting how the business community was aided during the pandemic as well as the city’s response to Winter Storm Uri.

“I’m proud of our staff and all of the hard work and creative new ways they’ve created to interact with our residents,” Hughson said. “They’re the heart and soul of our city government and we appreciated them all.”

Hughson also stated that people continue to come to San Marcos and the Central Texas region, citing that the city issued 759 new single-family permits in 2020 alongside San Marcos’ population growth.

The mayor said that the city is excited about what lies ahead, mentioning its Vision SMTX comprehensive plan; Hopkins Street Improvement Project; Blanco Riverine Mitigation Project; the ongoing development of the city’s new Public Services Complex; and continued bond projects.

“It’s exciting to see all of these wonderfully-planned projects become reality and remain within our budgeted bond financing,” said Hughson, showcasing the ongoing police department building renovation, upcoming fire station No. 6 and fire training facility construction, and the completion of San Marcos Public Library expansion and relocation of fire station No. 2.

Hughson said that the state of the city remains strong and that San Marcos is stronger together.

“The city remains committed to helping residents and businesses navigate the effect of the pandemic and the winter storm that tried to take us down,” she said. “We’ve shown such resilience this year, and we will continue to work together to overcome the challenges and economic hardships that persist even as businesses and facilities slowly begin to reopen.

“As we look back and celebrate our achievements, we look ahead with resolve to continue building a San Marcos that is strengthened, safe and welcoming to everyone in our city,” Hughson added.

As Cardona reflected upon SMCISD’s year amid the pandemic, he described it as “two Hurricane Harveys in a row for us.”

Cardona discussed the district’s response to COVID-19 as the schools moved to remote learning in March 2020, and gradually back to 85% capacity in its facilities as of April 2021, thanking the teachers, principals, staff and administrators for their work.

Cardona also showed a video during his remarks, showing the challenges the district faced during the pandemic and winter storm.

The SMCISD superintendent also shared that students harmed themselves as a result of the social isolation caused by COVID-19. He said an opportunity is present to put together actionable steps regarding mental health and wellness.

“Losing one child, or one Texas State student or one adult is too many,” Cardona said. “For far too long we have sat here and said we’re the innovation corridor. Well, my challenge would be that we innovate mental health in this community. The reality is that our principals and teachers will spend the next probably two years trying to recover from this one year of social isolation.”

Cardona also stated that he doesn’t get wrapped up in the state’s accountability system but believes that the pandemic has provided an opportunity to reimagine education.