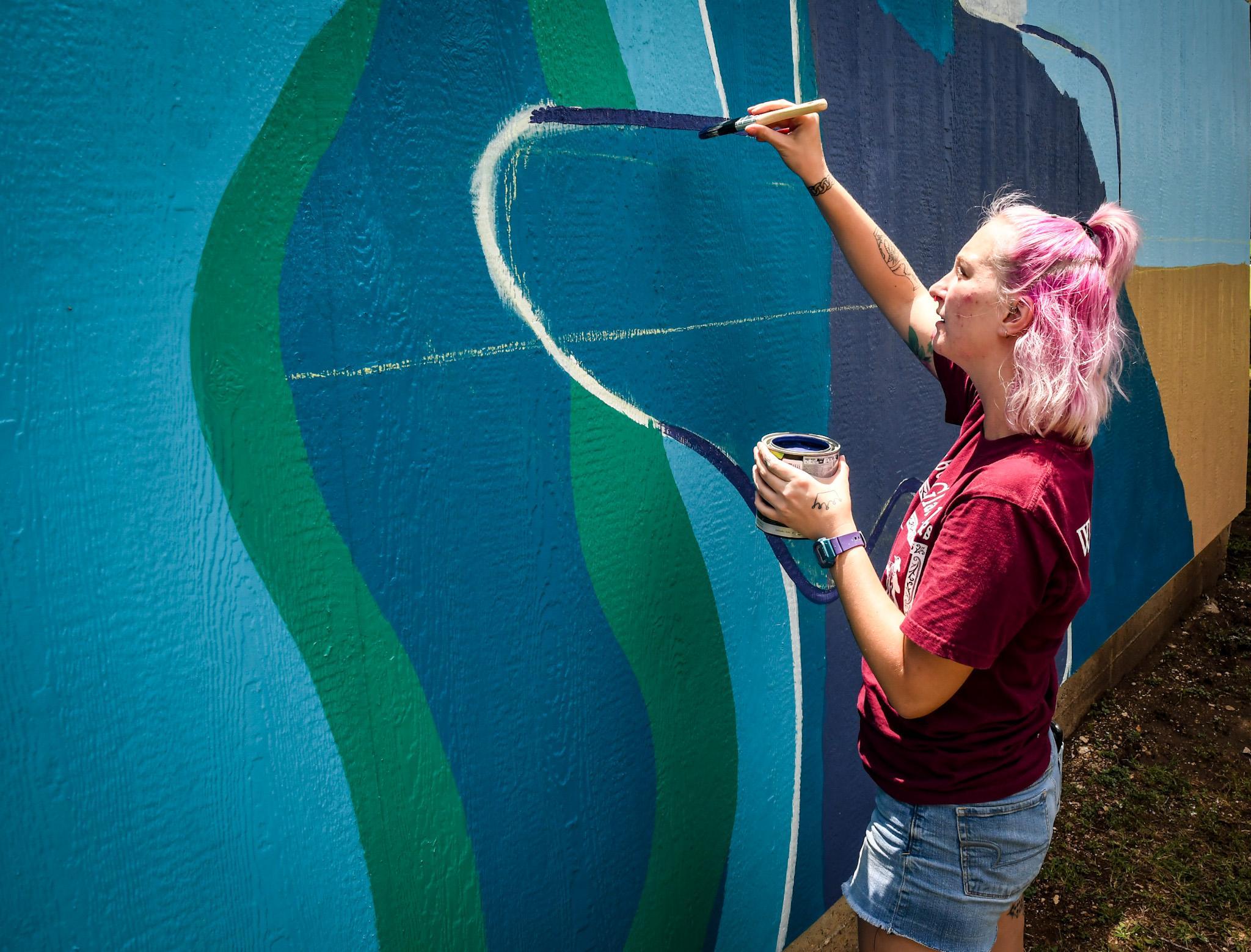 A new mural, which has been commissioned by Keep San Marcos Beautiful, aims to showcase the San Marcos River and also encourage visitors to keep litter out of the waterway. Pictured above and below, Karly Schlievert works on the mural next to the San Marcos Recreation Hall — 170 Charles Austin Dr. Daily Record photos by Lance Winter

MURAL IN THE MAKING

The mural, which has been commissioned by Keep San Marcos Beautiful, aims to showcase the river and encourage visitors to keep litter out of the waterway.

“This mural, the goal is to show that our river doesn’t just end or do a loop like a lot of people might think when they come to visit,” said Amy Thomaides, City of San Marcos Community Enhancement Initiatives Manager. “(The mural) shows that it goes all the way to the Gulf Coast.”

Schlievert’s early work on the mural shows the state of Texas filled with shades of blue and tan colors, featuring swirls throughout her work.  She said she was uniquely inspired to show how the San Marcos River flows down to the Gulf of Mexico.

“I don’t know, the first thing that came to mind was it being like, especially since we’re talking about trash flowing from the river to the gulf, was litter being like a giant toilet flushing down,” said Schlievert, who graduated from Texas State University in spring 2020. “I started to do some swirls, that's what’s gonna be in the middle of the Texas. We went back and forth on how exactly the swirls were going to look. But my style of art is really graphic and usually consists of a lot of bold colors, not a whole lot of blending and realistic stuff. This is my first time doing something like this for the city.” 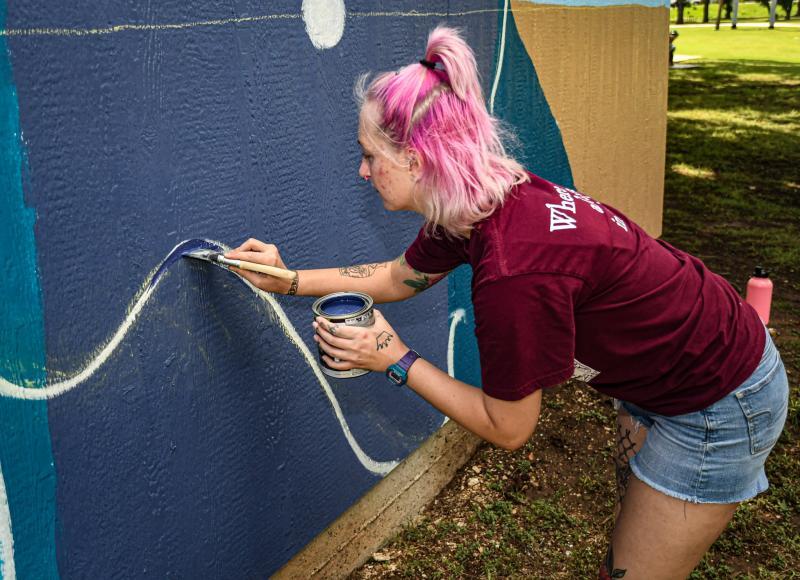 Keep San Marcos Beautiful is creating the new mural through a grant from Keep Texas Beautiful, which was granted funding from the U.S. Environmental Protection Agency.

San Marcos, alongside the Houston/Galveston area and the Rio Grande Valley, have been granted monies through KTB for projects focusing on reducing the amount of trash in Texas waterways through trash prevention and removal.

“Keep Texas Beautiful is grateful to receive this EPA grant and looks forward to working with the project communities to help address the ever-increasing and important issue of litter in our waterways,” KTB Program Director Sara Nichols said in a news release. “Through this grant, we are hoping to create programs that are proven to work and can be implemented in any community with litter and illegal dumping issues.”

Alongside the mural, Keep San Marcos Beautiful has other projects in the works, including an activity guide and plastic bags river visitors can use to pick up trash during their float on the river.

“The activity guide is gonna be really cool,” Schlievert said. “It’s an ongoing thing right now … It’s been this project they’ve been thinking about for I think five years … It’s going to be fun, graphic work but educational, teaching people how to enjoy the river while also not ruining the environment.”

“We have some of the trash bags that people who are visiting, and are going to go tubing, can pick up a litter bag,” Thomaides said. “They can then take it during the week to the Visitor Center and they’ll get a Kudos Coin, which is something Keep San Marcos Beautiful started a couple years ago working to keep litter out of our river, and be able to redeem it at a local business.”

She added that during the weekend litter can be taken to a Leave No Trace tent located at Rio Vista Park to redeem a Kudos Coin. Keep San Marcos Beautiful will also audit the trash and keep the data for Keep Texas Beautiful.

Thomaides said they’re aiming to complete the mural by the end of August and hold a dedication ceremony on the weekend to engage with the community. Schlievert and Thomaides both said they hope the mural reminds residents and visitors to keep trash out of the San Marcos River.

“We hope that it sparks in their brain that it’s a real river,” Schlievert said.