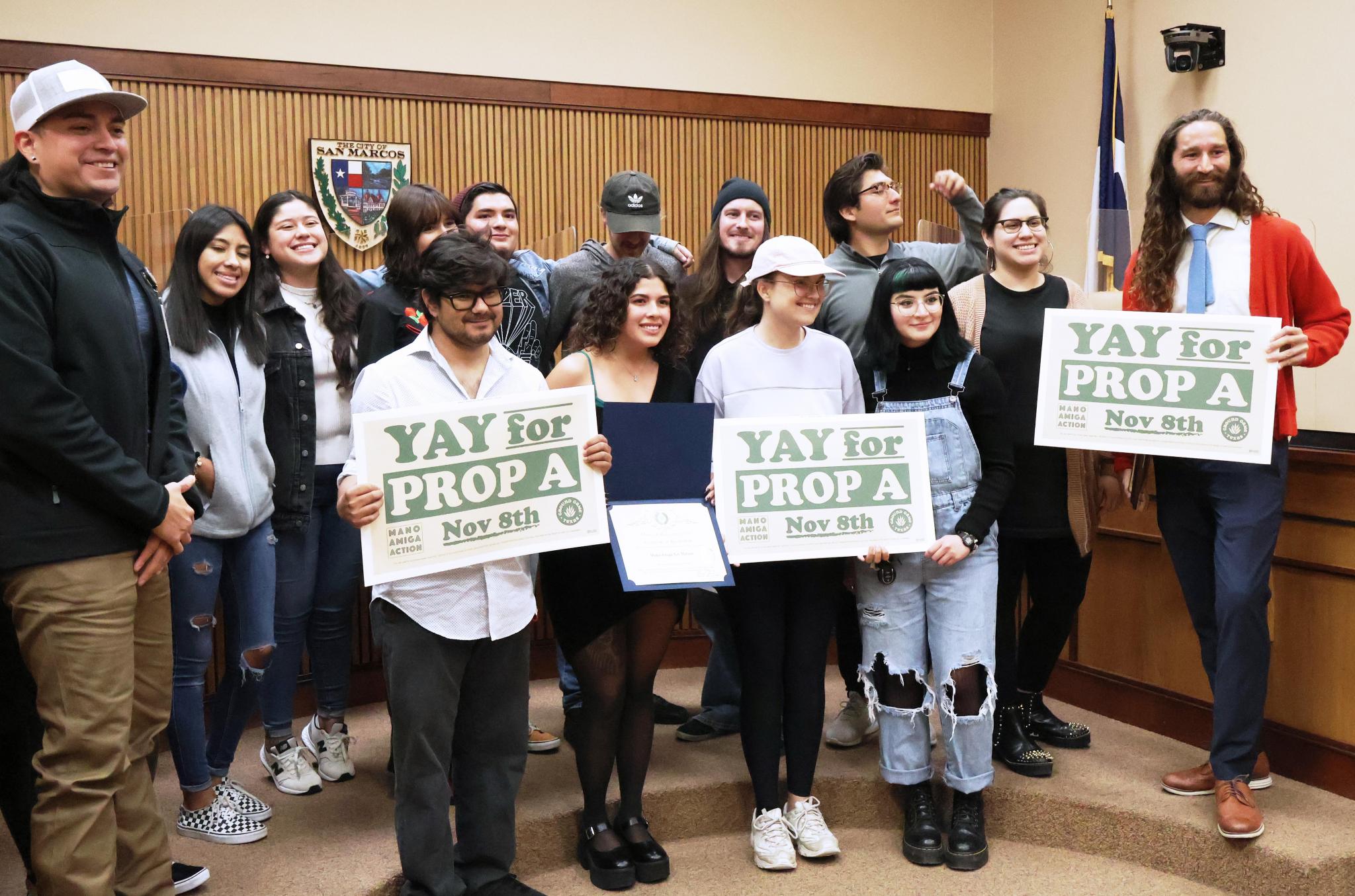 The ordinance, which was a part of Proposition A, was enacted after San Marcos City Council canvassed votes during a meeting on Thursday.

Nearly 82% of San Marcos voters cast their ballot in favor of the proposition — 15,655 for Proposition A and 3,475 voting against the measure.

“The people of San Marcos have spoken and made it clear that this issue is important to a vast majority of our community” said Elle Cross, Right to Justice Coordinator with Mano Amiga Action. “This Thursday, our neighbors saw the fruits of their labor, and for many, this is only the beginning of their journey to working for a more just society.”

Proposition A made its way onto the ballot after a coalition consisting of Mano Amiga, Ground Game Texas, San Marcos Democratic Socialists of America, the Hays County Libertarian Party, the Hays County Democratic Party, and the Texas Cannabis Collective gathered more than 10,000 signatures on a petition.

After the petition was certified by the San Marcos City Clerk, city council voted during its Aug. 2 meeting to add the ordinance included in the petition as a proposition on the ballot for the Nov. 8 election.

The newly-enacted ordinance ends citations and arrests by the San Marcos Police Department for misdemeanor possession of marijuana up to 4 ounces. San Marcos police, however, can cite an individual or make an arrest for Class A or Class B misdemeanor possession of marijuana if it’s a part of an investigation involving a felony-level narcotics case or the investigation of a violent felony.

Additionally, the ordinance ends citations for possession of drug residue or drug paraphernalia, the use of city funds or personnel to conduct THC concentration testing will be prohibited, and there will be a prohibition against city police using the odor of marijuana or hemp as a probable cause for search or seizure.

The ordinance is only applicable to the San Marcos Police Department. The ordinance does not bind Texas State University police, Hays County Sheriff’s Office or Texas Department of Public Safety to decriminalize up to 4 ounces of marijuana in San Marcos.

Marijuana possession and possession of drug paraphernalia were among the most common citable offenses during the third quarter of the year, according to San Marcos Chief of Police Stan Standridge.

However, as Standridge pointed out to the Chief Advisory Panel on Oct. 19, with the ordinance’s enactment, marijuana possession of less than 4 oz. will no longer be a Cite and Release offense.

“To what extent are those offenses leading to something else?” one panel member questioned. “In other words, by decriminalizing, is that going to mask other offenses that might be occurring?”

“Yeah, and in fact, you have some of the numbers in front of you,” Standridge responded during the Oct. 19 meeting. “Remember, of the 28 where we still took enforcement, although it was Cite and Release eligible, 24 of them had committed some other type of crime. So that gives you an example. Most of these people are not committing just a single violation of the law.”

With the ordinance going into effect, Mano Amiga Action Communications Director Sam Benavides said ending the criminalization of petty possession of marijuana is the first step in shifting narratives around drug enforcement policies in San Marcos and Hays County.

“We must transform our system into one that does not criminalize people who would otherwise thrive if granted the professional assistance they deserve,” Benavides said. “We now have the opportunity to make this a reality with common sense county programs like Cite and Divert as well as the Public Defender Office, which Commissioners will be discussing on [Nov. 22]”