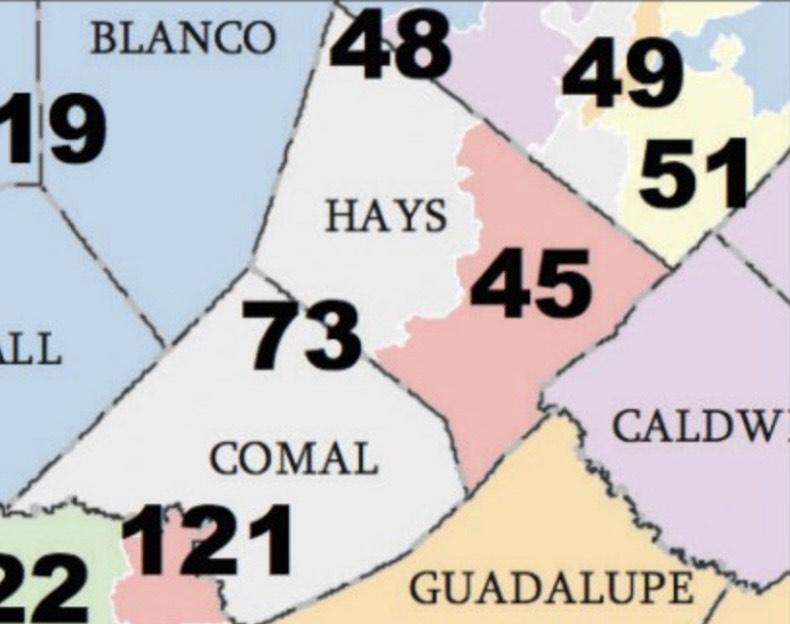 A proposed Texas House map would separate Hays County into two different districts and State Rep. Erin Zwiener (D-Driftwood) would be drawn out of House District 45.

House Bill 1, which was authored by the chair of the House Redistricting Committee Rep. Todd Hunter (R-Corpus Christi), is only the first draft of the new Texas House map and will likely change before it goes through the legislative process and ultimately signed by Gov. Greg Abbott.

The map, however, in its current state has major implications for Hays County. The county would be separated into two house districts for the first time. House District 45 would encompass the Interstate 35 corridor, including the cities of Buda, Kyle and San Marcos. Meanwhile, Dripping Springs, Wimberley and west Hays County would be a part of House District 75, which will include approximately 40,000 people from Hays County and all of Comal County.

“While I’m incredibly grateful that the I-35 corridor was kept whole, as it should be, I’m disappointed on a personal level that I was drawn out of the district,” said Zwiener, whose town of Driftwood was drawn out of House District 45 in the proposed map released Thursday. “However, I still hope to run in House District 45. The proposed map splits the community of Wimberley between two different house districts, uses confusing lines to needlessly divide Hays CISD community members from each other, and divides communities from their schools in Dripping Springs ISD.”

Zwiener said she is hopeful that district lines could be created that would restore her home into District 45.

Zwiener was first elected to represent House District 45 in 2018 and was reelected in 2020.

Hays County’s explosive growth has contributed to the addition of a House District within its boundaries as it has grown too large to contain one district, according to Zwiener’s office.

Zwiener said she has loved representing all of Hays and Blanco counties and would be sad to see a large population of her district join a different district.
“This is the unfortunate consequence of representing such a rapidly growing area during redistricting,” Zwiener said, “but I pledge to all of my constituents that if I have ever represented you, I will always be there to help in the future.”