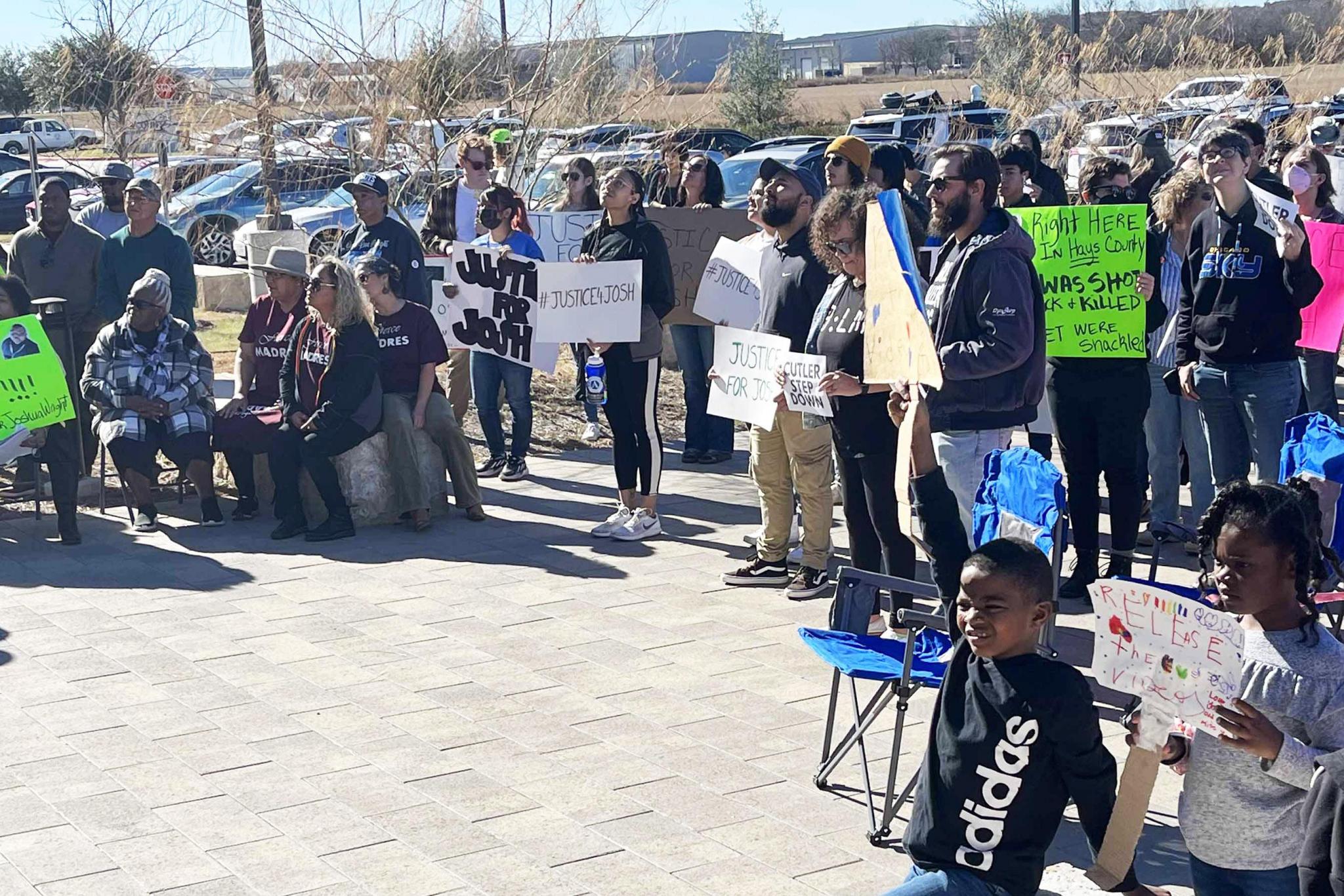 A crowd gathered at the Hays County Public Safety Building on Sunday where those in attendence called for the release of body camera footage in the fatal shooting of Joshua Wright. Above, the crowd holds "Justice for Josh" signs. Below, attendees show off their signs, which call for the release of the body cam footage. Daily Record photos by Zoe Gottlieb

Chants of “Release the Video” echoed outside the Hays County Public Safety Building where a crowd sought the release of body camera footage more than a month after the fatal shooting of inmate Joshua Wright.

The crowd came together to call for the release of the body camera footage, removal of corrections officer Isaiah Garcia from duty and for Sheriff Gary Cutler to step down during a rally in San Marcos on Sunday.

Wright, 36, was shot by a Hays County corrections officer, later identified by Wright’s family lawyer Chevo Pastrano as Isaiah Garcia, as he received medical treatment at Ascension Seton Hays in Kyle on Dec. 12, 2022. The Hays County Sheriff’s Office alleges Wright assaulted the officer and began to flee. The officer chased Wright through the emergency room. HCSO stated that the officer discharged his firearm, striking Wright.

Wright was a pretrial detainee in the Hays County Jail for unauthorized use of a motor vehicle, bail jumping, failure to appear, reckless driving, criminal mischief and evading arrest and detention.

Although body cam footage has yet to be released, Pastrano shared during a press conference on Jan. 2 that a second autopsy found six entrance wounds and four exit wounds in Wright’s body.

Garcia, who was placed on administrative leave following Wright’s death, has returned to work pending the outcome of the investigation, according to Hays County, which added that he won’t be assigned to a position involving direct supervision of jail inmates until investigation is complete.

Joshua’s sister, Adrian Wright, and his daughter, Xyrrena Wright, questioned how Garcia could continue to work in the Hays County Jail.

“It hurt me to my heart when that guard put my brother down like he wasn’t even a human,” Adrian Wright said. “... Sheriff Cutler, you need to do more. You need to protect people. Why would you have somebody that just cut a soul down like that back in the jail? I don’t care if they’re not working with inmates but inmates can see him. You don’t know who can see him. He doesn’t need to be in there. He needs evaluation … He needs to be held accountable.”

“This is wrong,” Xyrrena added.

“[Garcia] killed my dad, shot him six times,” Xyrrena said. “He was a good person. He was a good dad … It makes no sense that he shot my dad and he’s still working there.”

Hays County said in a previous statement that the Texas Rangers requested that body cam footage of the officer involved in the shooting along with any additional information related to the investigation not be released until the investigation is over.

“The immediate release of the body cam video and other information may adversely affect the Rangers’ ability to conduct an investigation by, among other things, impacting the recollections and statements of witnesses,” Hays County’s statement said.

The county added that when the footage is released it will be reviewed and potentially redacted after Ascension Seton Hays raised concerns regarding the inadvertent disclosure of privileged third-party medical information.

But each speaker at Sunday’s rally made it clear that demands for the body cam footage won’t stop until the video is released.