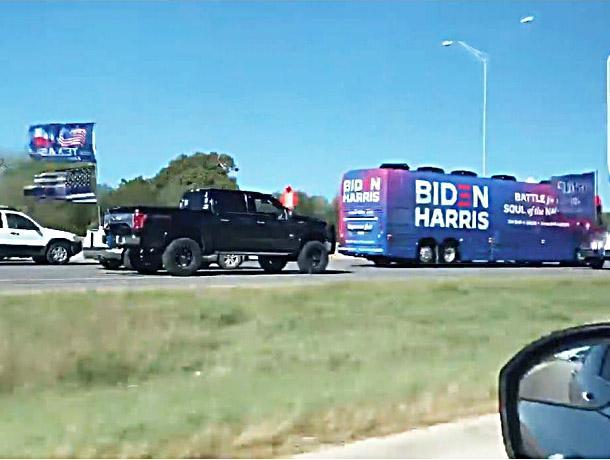 City of San Marcos Director of Public Safety Chase Stapp and two city employees are part of a lawsuit involving an incident that occurred between a Biden-Harris campaign bus and supporters of former President Donald Trump on Oct. 30, 2020. Screenshot from lawsuit

San Marcos Director of Public Safety Chase Stapp and two other unnamed city employees are being sued over a Biden campaign bus incident that occurred in October 2020.

Former State Sen. Wendy Davis, a Biden campaign volunteer, campaign staffer and a bus driver are suing, claiming that Stapp and the San Marcos Police Department failed to provide them protection as the Biden-Harris bus drove through San Marcos on Interstate 35. The bus was surrounded and followed by supporters of former President Donald Trump who formed a self-labeled “Trump Train,” the lawsuit states.

On Oct. 30, 2020, the Biden-Harris campaign was scheduled to make a stop in San Marcos for an event at Texas State University. The bus traveled from San Antonio up I-35. According to the lawsuit, law enforcement departments “up and down the I-35 were aware of the existence and dangers of the Trump Train, and several delivered escorts, some prearranged to accompany the bus safely along stretches of I-35 … But in the City of San Marcos help never arrived.”

In an interview with the Daily Record in November 2020, then-Hays County Commissioner Pct. 3 Candidate Lisa Prewitt said she called Stapp at 12:15 p.m. on Oct. 29 and again with a status update at 3:15 p.m. on Oct. 30 on behalf of the Biden Campaign to alert law enforcement of their travels and to express concerns about safety.

According to the Texas Tribune, however, Stapp said in a statement last year that the Biden-Harris campaign did not request assistance from the San Marcos Police Department in advance of the campaign event so that it could be “evaluated and prepared for.”

The lawsuit states that “certain officers from the San Marcos Police Department said that they would not respond unless the Biden-Harris Campaign was ‘reporting a crime,’ explaining, ‘we can’t help you.’ Despite being told the bus was driving through San Marcos, and despite the fact that Plaintiff's had already tried calling 911, an officer from the San Marcos City Marshal’s Department made similar excuses, saying ‘we don’t know if the bus is in our jurisdiction’ and ‘call 911 if there’s a problem’.”

Viral videos show the campaign bus driving through San Marcos, which ultimately culminated in an accident between an SUV following the bus and a black truck that was a part of a group of Trump supporters on northbound Interstate 35 near Exit 210.

A City of San Marcos spokesperson said the city would not comment regarding the lawsuit due to pending litigation.