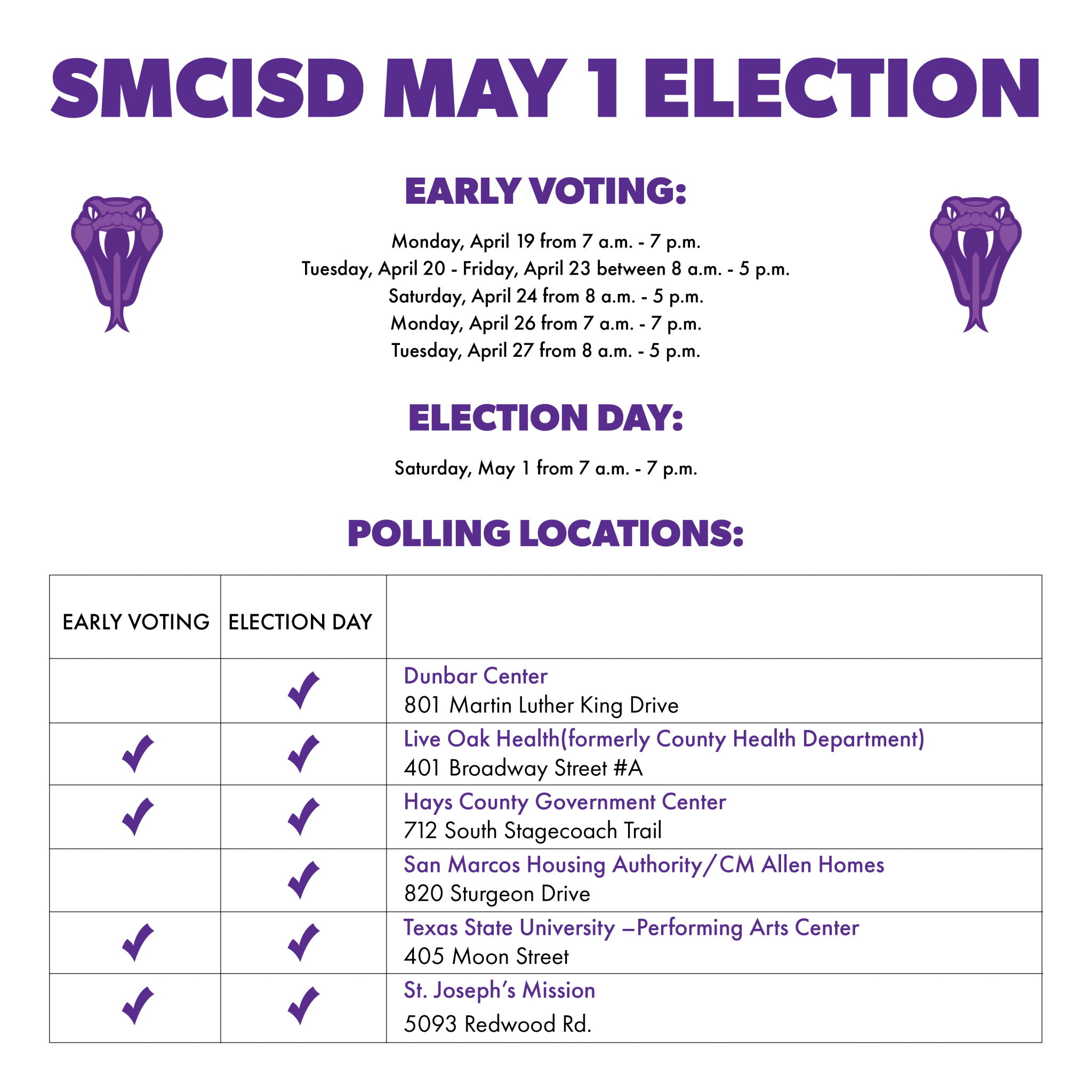 The San Marcos Consolidated ISD Board of Trustees took action on several items regarding its upcoming May 1 election.

SMCISD will hold an election for two at-large board positions. Trustee Anne Halsey is the lone at-large incumbent running for reelection. Five additional candidates will be vying for the two board positions: Nicholas Costilla, Roger Davis, Andrew Fay, Sylvia Muzzy and Mari Salmi.

During Monday’s regular meeting, the board approved poll locations in Hays County for Election Day voting and listed the early voting location, dates and times for the upcoming election.

The trustees also approved a contract with Hays County for the purpose of election services. The board approved a resolution to participate in a joint election in Hays County to be held on May 1. Alongside SMCISD, Hays Consolidated ISD, Dripping Springs ISD, the City of Dripping Springs and the City of Wimberley will be conducting elections on May 1.

In other business, the board approved the school redesign plans at Travis Elementary School, Goodnight Middle School and Miller Middle School, which will be implemented for the 2021-2022 school year.

The board approved board policy update 116, and early notification retirement/resignation incentive for professional, paraprofessional and auxiliary employees.

The trustees also approved an order authorizing the issuance, sale and deliver of San Marcos CISD unlimited tax refunding bonds in one or more series at one or more times, levying a continuing direct annual ad valorem tax for the payment of bonds; authorizing an authorized representative to approve the amounts, interest rates, prices and terms thereof and certain other agreements, procedures and provision related thereto.

With the approval, the district aimed to refinance some of its bonds, which will save the district approximately $1.5 million, said Robert Tijerina, the trustees’ financial advisor.

The board approved redistricting legal services retainer agreement for the district’s single-member board district boundary lines following the 2020 U.S. Census. The redistricting of boundary lines will not go into effect until at least the May 2022 election, according to James Barton, SMCISD Assistant Superintendent of Business and Support Services.

Alongside its board action, the trustees approved a resolution in support of the San Marcos Lions Club.

“(The Lions Club) does a lot for our community,” SMCISD Superintendent Michael Cardona said. “And when I say a lot, they do a lot for our students. They do a lot for our staff members. People don’t realize that they were testing all our pre-(Kindergarteners) at Bonham for eyeglasses and at other elementary schools. They’ve provided thousands upon thousands of dollars of gift cards for our teachers for supplies.”

“The Lion’s Club really has been giving a lot,” Cardona added. “They help us out. They volunteer at our STEAM Fair. They’re visible at our STEAM Fair and other community events. I know that there were some board members who were wanting to show support on behalf of the district and the things they do for our community.”

The district’s resolution of support comes as the San Marcos Parks and Recreation Advisory Board reviews the City of San Marcos’ lease with the Lions Club Tube Rental, after concerns that the lease was not in the best interest of the citizens or the river.

The approved resolutions states that “the San Marcos Consolidated Independent School District wishes to support San Marcos Lions Club Tube Rental’s continued operation on the San Marcos River so that it may continue its philanthropic efforts in our community.”

The next regular SMCISD board meeting will take place on March 8 at 6 p.m.