Local education and workforce leaders gathered Wednesday to discuss the future of workforce preparation, local and statewide trends, and the future of talent recruitment in the greater San Marcos region.

“The Texas Innovation Corridor is one of the most dynamic and fastest growing corridors in the US,” said Matthew Worthington, San Marcos Area Chamber of Commerce board chair. “To help prepare our residents for the employment opportunities that accompany economic growth, workforce development from across the region are working together and taking a strategic approach to develop and enhance our workforce. The quality of the community’s workforce is the most important competitive asset that a community can offer.” 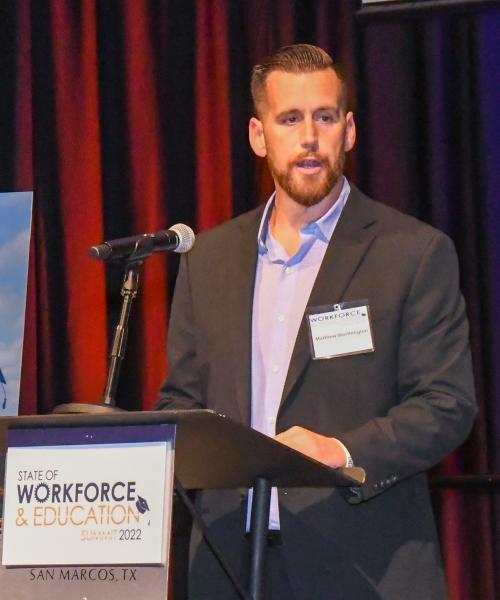 Daniel, who delivered Wednesday’s keynote address, highlighted that the state of Texas has seen nine consecutive months of workforce growth.

“Each of the last nine months, including July, we have grown the workforce in Texas more than we have any other time in the state,” Daniel told the crowd gathered at Embassy Suites San Marcos Hotel Conference Center. “When we set our nine [month] consecutive record, the eight records we broke before that were the eight previous months.” That’s heavy growth, y’all. 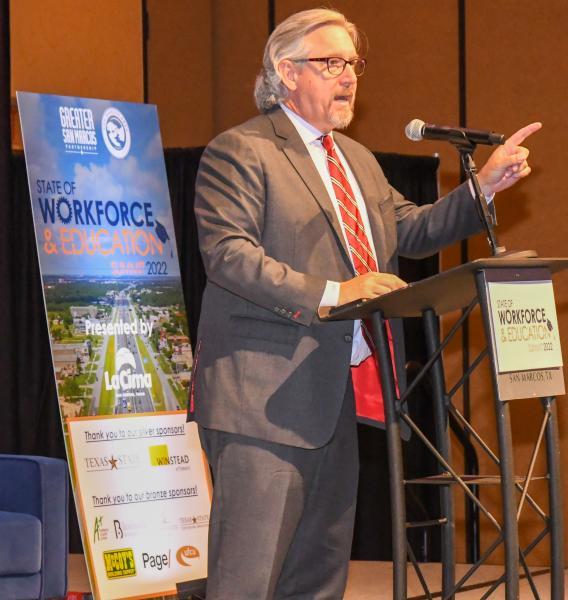 He also stated that Texas faces a middle-skills job gap, which are jobs that require training after high school but a four-year university degree isn't required.

“[Middle-skill jobs are] 54% of jobs in the state,” said Daniel, adding these jobs include electricians, plumbers and some nursing positions. “Here’s where we start seeing the mismatch — 8% of the jobs require no training after high school, some don’t even require a high school diploma, and 16% of Texans fall into that category. Fifty-four percent of the jobs are these so-called middle-skill jobs and about 45% of Texans have those qualifications. And, the math that you’re doing in your head right now actually does work. If we could right size the number of people who are in unskilled and entry labor jobs, if you have some sort of re-skill, or up-skill the other 8%, we could fill those middle-skill jobs in the gap. That's the future of workforce in Texas.”

“Think about San Marcos and how it’s situated,” he said. “You have two highly-performing suburbs — San Antonio and Austin are doing a great job. Their success, you can capitalize on that here. You’re situated in an area that’s primed to do some impressive things. The second-fastest growing metro area in Texas, one of the top five growing metro areas in the United States and the economic development teams here are strong. But being able to capitalize on this workforce trend and being able to find a way to solve this middle-skills gap will accelerate whatever economic success you already have and so on.”

“Despite the pandemic, many of our counties have seen the labor force grow significantly as much of the country looks to relocate here to grow their careers, to start or expand their business and raise their families,” Fletcher said. 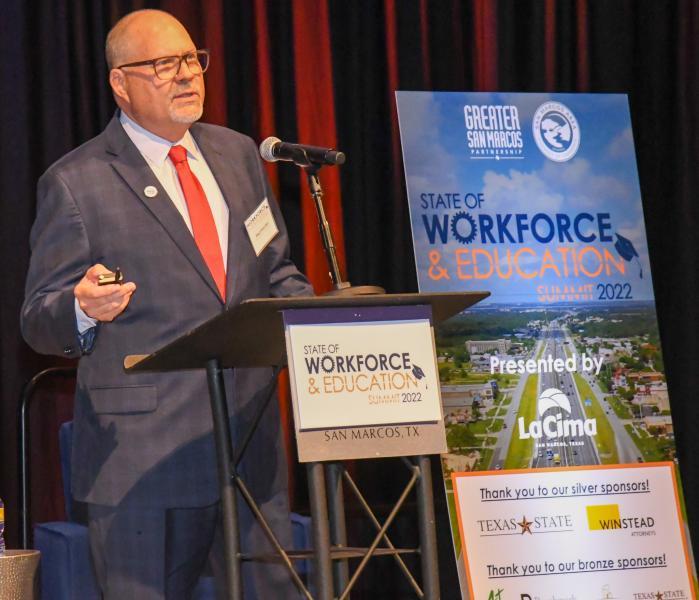 He stated that the counties his organization oversees recorded an unemployment rate around 11% in April 2020 as the pandemic began. The rate is now down to approximately 3.2% in Hays County.

The most in-demand jobs in Hays and Caldwell counties are retail-related work, CDL drivers an, registered nurses.

Following Fletcher’s discussion, the three superintendents took part in the panel discussion moderated by Lorraine Lane of Gary Job Corps where they were asked about trends they’re seeing in the career, technical and education fields.

Wright said he’s seeing an increased interest in healthcare jobs with more than 100 kids from Hays CISD who interned with Ascension Seton Hays.

“We are seeing a lot of kids reach out and take industry-based certification courses,” Wright said. “We have well over 1,000 of our graduating seniors earn certifications this past year. So, after listening to our speakers, with 33% needing bachelor’s degrees and the middle skills, I think we’re starting to target those areas, and more and more kids are gravitating [to those certifications.]”

Estrada spoke about Lockhart ISD’s CTE programs, which includes everything from business and industry to science, technology, engineering and mathematics.

“I think as a school system, we’re doing our best to ensure that our kids are being steered in those directions and having those opportunities,” Estrada said. “But, I think, as a culture, we have to ensure that we’re lifting up those professions and making them something that kids will be interested in and see as worthy jobs.”

“I think we’re really fortunate to work with not only GSMP and Workforce Solutions and the chamber, but local area nonprofits, Lions Club, Rotary, we all have a great relationship,” Cardona said. “I think one of the biggest things we’ve done is open our facilities that we’re giving evening tours to our community, to our parents … I think getting our parents inside the building to see … It’s time to get businesses and parents back into the building so we can work together to further education.”

Damphousse followed the superintendent’s panel with a state of the university where he said he was excited that Texas State is becoming increasingly popular with perspective students.

“There was a time when the reputation was that this was kind of a party school,” Damphousse said. “You may have heard that story. But that reputation is slowly diminishing over time, and we’re being seen more and more as a great academic institution.” 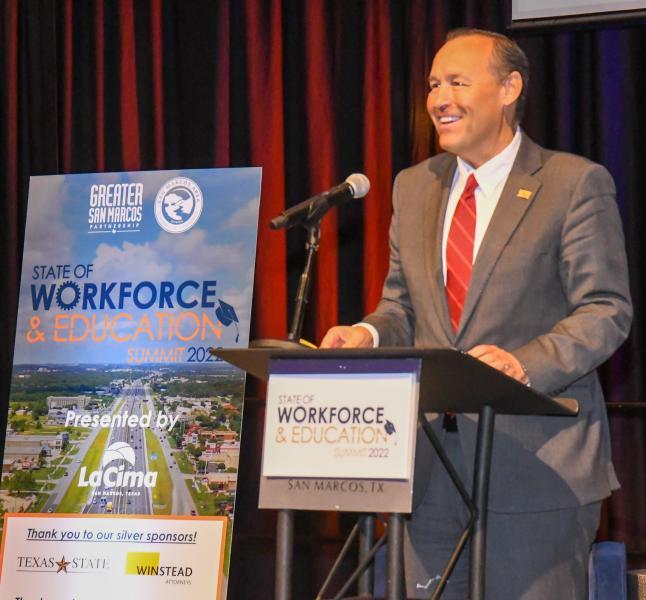 Damphousse said that 34,000 students applied to attend Texas State for the fall of 2022. The university set a new record for freshman enrollment at 7,590.

“We are the third most popular school to apply to in the state of Texas,” Damphousse said. “You might guess who the others are but to be considered amongst that tier of institutions — and we’ll talk about how we can continue to compare ourselves to those two universities, not just the number of students who are applying to attend but also what we’re doing and how much more similar we’re coming like them. It’s an incredible challenge and a really exciting opportunity for us.” 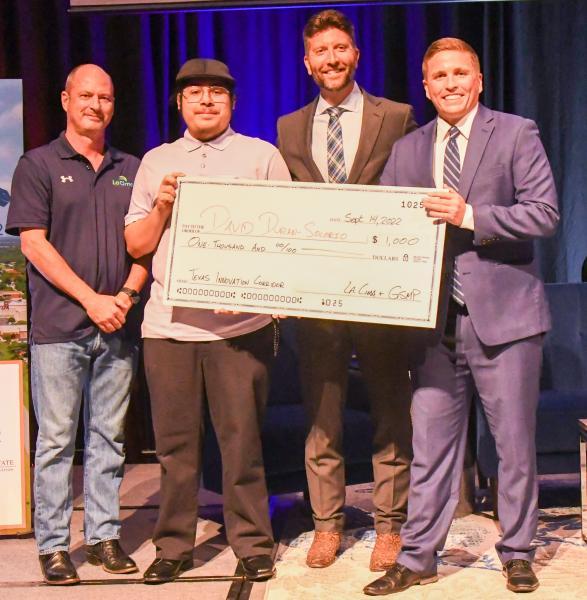 “What you saw today was a confluence of so many different partners that help us achieve our goals, ensuring our education system and our workforce needs are met,” Giulietti said.