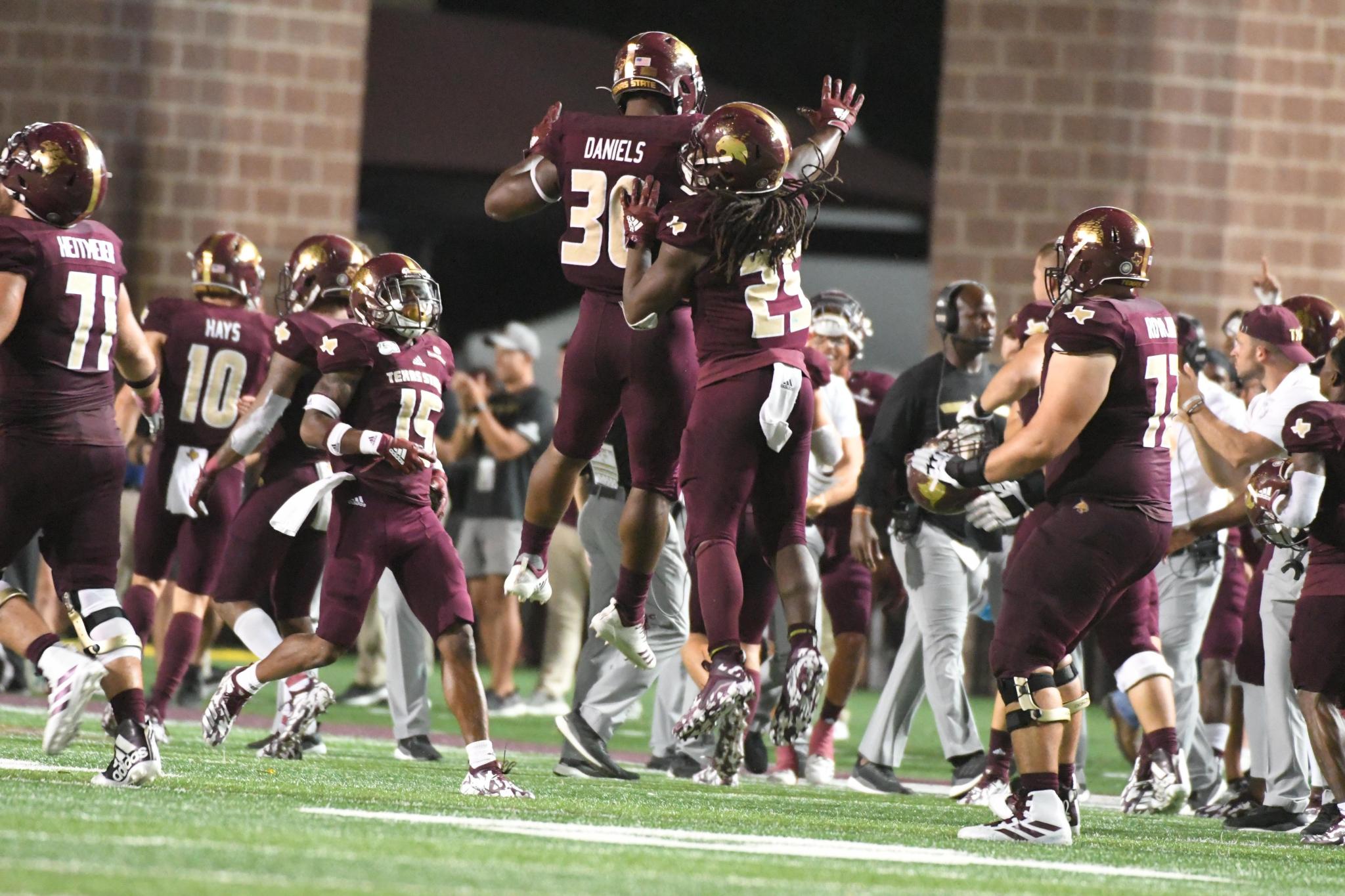 Bryan London II has played in some heartbreakers.

After all, the Bobcat senior linebacker has played during one of the most tumultuous times in Texas State history.

And Saturday looked to produce that same familiar heartbreak inside Bobcat Stadium. A questionable review after Georgia State (2-2, 0-1 Sun Belt) spiked the ball as the clock rolled to zeroes gave the Panthers enough time to send the game into overtime. Add a missed field goal attempt by senior kicker Joshua Rowland in double overtime and Texas State (1-3, 1-0) looked headed toward misery.

A redemptive Rowland sailed a 35-yard field goal attempt through the uprights, sending the Texas State bench into a frenzy. Pure elation for a program that’s used to being on the wrong side of these types of contests —Texas State 37, Georgia State 34 in triple overtime.

“I just think (the win) means a lot for me and a lot for the program,” said London, who tied a Texas State school record for most tackles in a game with 22. “You know when you start getting those (pass interference calls) and stuff, the people that have been around here for a couple of years are like, ‘aww man, here we go again.’ You know, I just got my teammates together and said, ‘Nah, this is where we change it.’”

Fast-forward 48 days later and the Bobcats’ ‘New Era’ was off to a humbling start — an 0-3 record, a running game ranked dead last in the country and no true answer at quarterback.

But during Saturday’s game against Georgia State, the Bobcats did everything they hadn’t in their first three games under head coach Jake Spavital. The Bobcats’ much-maligned rushing attack pounded the rock to the tune of 221 yards and three touchdowns on 50 carries. Junior quarterback Gresch Jensen, who entered Saturday’s contest with five interceptions to his name, played a clean game — completing 16-of-25 passes for 129 yards and no turnovers.

“We were all really hungry for this game,” said junior running back Caleb Twyford, who led Texas State’s running game with 137 yards. “The first three games may not have went as planned but for this game we all decided we’re going to straighten our heads up, come out, play as hard as we could.”

For one night, Texas State’s efforts were rewarded with a win. And with a victory in hand, the Bobcats are starting to believe a turnaround is in sight.

“I thought this was a pivotal moment for us,” Jake Spavital said. “You know, I wanted these kids to win so bad. If they pull this one off, there were going to be some tough conversations and you could have possibly lost the team.

“I thought the kids never blinked once, even when there were times where you thought you were going to lose the game,” the first-year head coach added. “Man, they just kept battling. They kept pressing forward, and that is a very big win for us because it shows us that we’re capable of finishing games if we play together as a team.”

Jake Spavital isn’t sure that Texas State’s win sends any message to their Sun Belt opponents. But after a wild, triple-overtime win, Saturday’s outcome is far more rewarding than the usual heartbreak.

“Just to get that confidence with a win, like I say, ‘it’s easier practicing on Sunday when you win,’” London said.